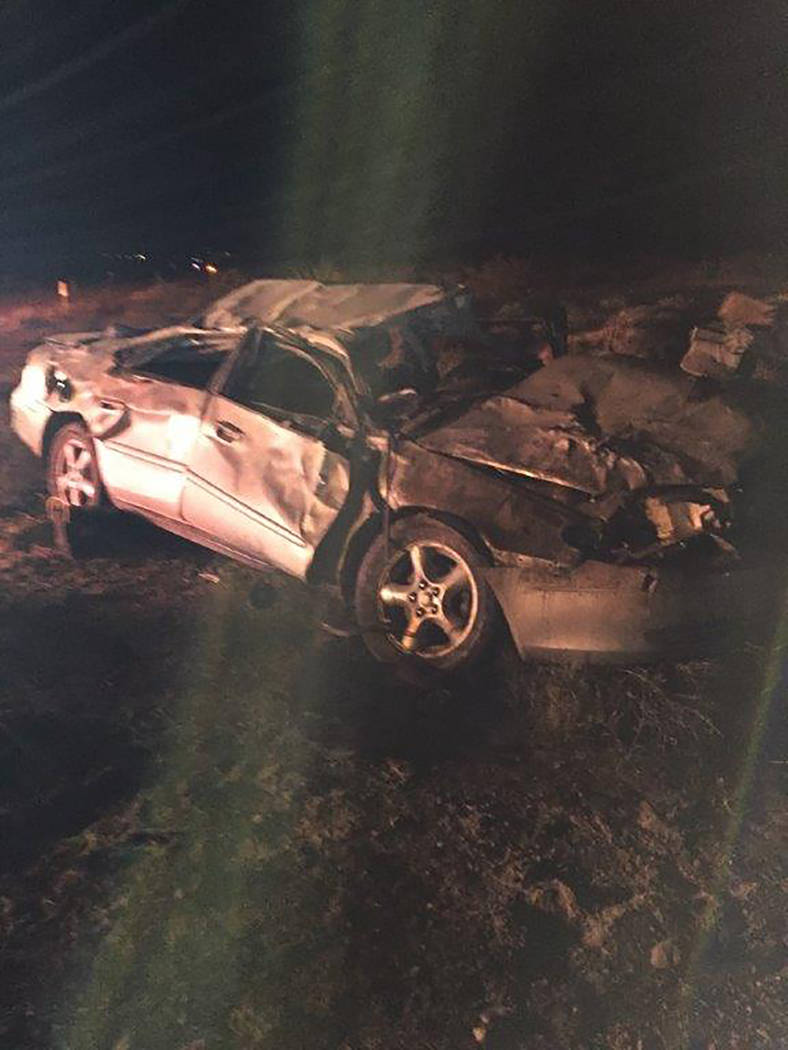 Special to the Pahrump Valley Times A landing zone for Mercy Air-21 was established along north Highway 160 on Thursday after a single-vehicle rollover crash just before 9 p.m. Fires crews were forced to mechanically remove the entrapped driver, prior to transport to UMC Trauma in Las Vegas. 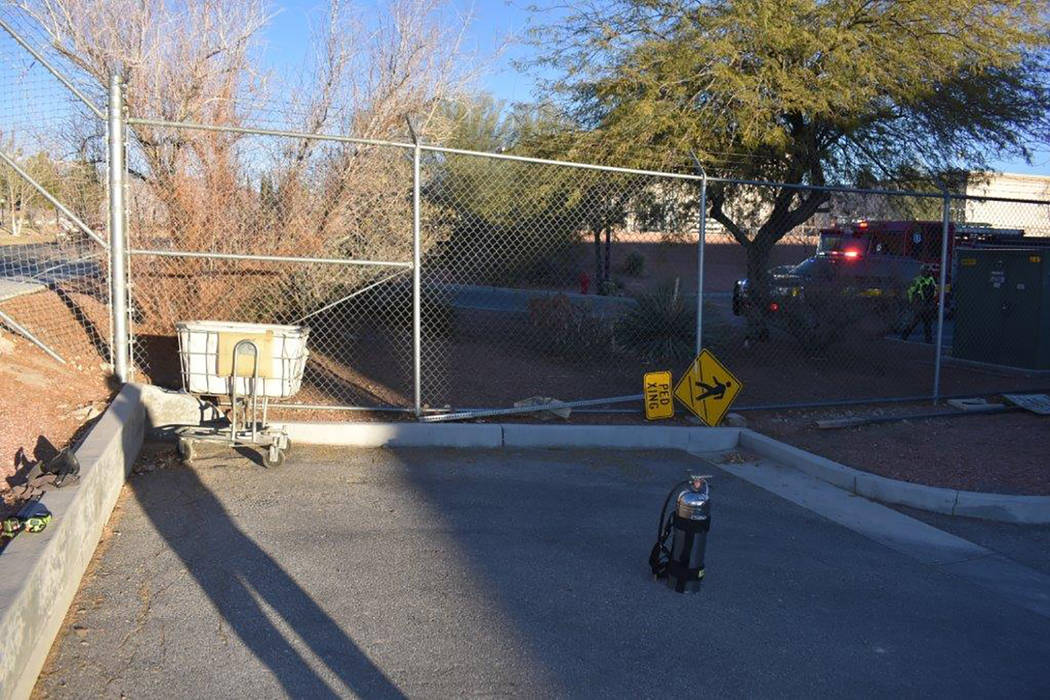 Special to the Pahrump Valley Times Fire crews were summoned after an employee discovered smoke emanating from a small package at the main post office just before 4:30 p.m. on Thursday, Feb. 15. A thermal-imaging camera was used to determine the threat of the smoking parcel, which turned out to be a damaged battery. No injuries were reported. 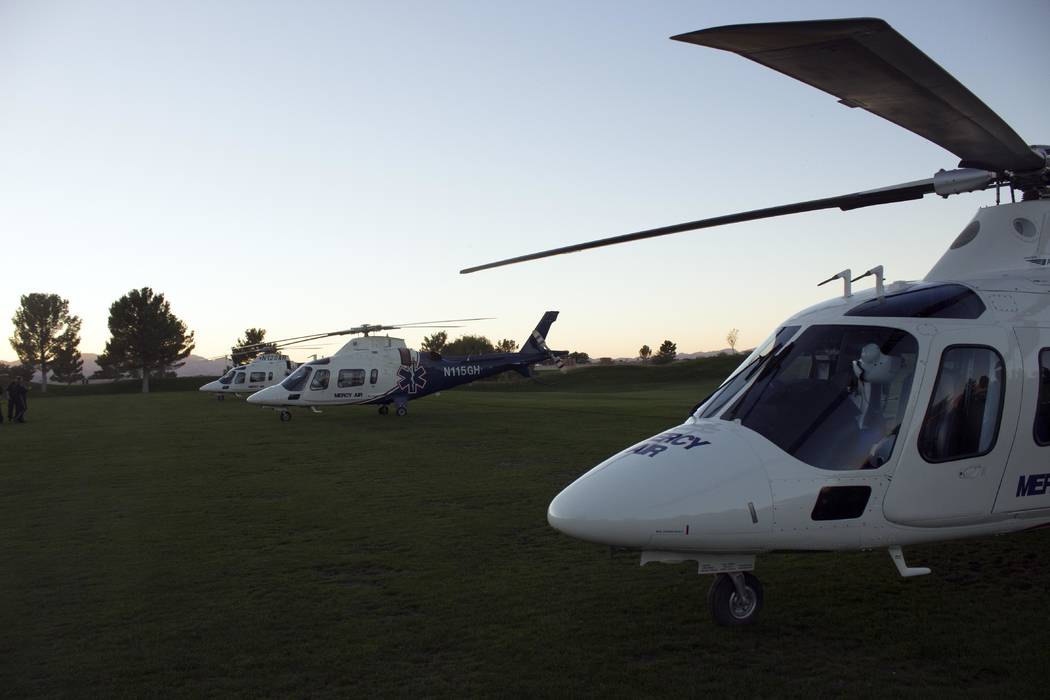 Jeffrey Meehan/Pahrump Valley Times A Mercy Air helicopter was dispatched to the scene of the crash, which occurred just before 9 p.m. on Thursday, Feb. 15, near mile marker 22 just north of Pahrump. This file photo shows Mercy Air helicopters during a visit to Pahrump last year.

One person was transported via helicopter to UMC Trauma in Las Vegas after a single-vehicle rollover along Highway 160.

The crash occurred just before 9 p.m. on Thursday, Feb. 15, near mile marker 22 just north of town.

Pahrump Valley Fire and Rescue Services Chief Scott Lewis said crews were forced to upgrade their response while en route to the location.

“We were notified by dispatch that the occupant was still entrapped inside the vehicle where I then upgraded to a rescue assignment, adding additional resources,” Lewis said. “Rescue 1 , myself and a medic unit arrived on location and found that the report was accurate as there was still a person entrapped within the car.”

Lewis noted that the vehicle had actually rotated several times, before coming to a rest on its wheels.

“The driver’s injuries were consistent with a transport to the trauma center and Mercy Air 21 was added to the assignment,” he said.

A landing zone was established on Highway 160.

While the helicopter was en route to the scene, the extrication was completed within minutes of the rescue crews’ arrival.

“The medical unit provided care and Mercy Air 21 arrived on location where patient care was transferred to them, and that patient was flown to UMC Trauma in Las Vegas,” Lewis said. “All crews did a great job.”

Earlier in the day, there were some tense moments at the main post office at 2300 Postal Drive when an employee discovered smoke emanating from a small package just before 4:30 p.m.

Lewis said upon arrival, crews were directed into the rear parking lot of the facility.

A high-tech piece of equipment assisted crews in assessing the level of potential danger posed to first responders.

Additionally, he said the package was removed from within the building and was placed in a mail cart outside.

Upon determining no immediate threat, efforts were made to locate the sender as well as the recipient of the parcel.

“Utilizing sheriff’s deputies, they made contact with the addressee, who told us that he was awaiting a battery to be delivered to him,” Lewis said. “He granted permission for us to open the package without it actually having been delivered to him. Upon opening the package, we were able to confirm that it was, in fact, a damaged battery.”

The investigation included both Pahrump and postal inspectors out of Las Vegas, along with Pahrump Valley Fire and Rescue Services, and the Nye County Sheriff’s Office.

Lewis noted all agencies provided a well-coordinated effort and completed the assignment in a timely fashion.

“There were just a few local precautions taken, but it did not turn into a large-scale event due mainly to the use of solid training and long-established protocols,” he said. “The thermal-imaging camera did a great job for us, as it gave us an observation of what was going on inside this package. Postal Service officials did a good job in removing the package from within the structure, thus reducing the risk.”

The report of a structure fire prompted the response of fire crews just after 6:30 p.m. on Tuesday, Feb. 20.

Lewis said though the exact address was unknown, the fire was reported to be in the area of Barney Street and Gamebird Road.

Once crews were able to find the location, they were forced to traverse their way around several properties in order to get to the scene of the fire, where crews found an approximate 200 square-foot outbuilding on fire.

The structure was used to house a number of chickens on the property.

“While responding, we were also receiving reports that there was an exploding tractor, and numerous exposures including horses, a horse pen, as well as dogs running around the scene,” Lewis said. “The initial reports provided to us were inaccurate as the fire did not involve the primary dwelling on the property and all of the horses were protected.

There was some groundcover extension into the area where the horses were. There were also some other closely-placed small materials that were considered exposures. Individuals were attempting to extinguish the fire with garden hoses. There were no injuries reported, but there were a few, unknown number of chickens who were lost in that fire.”

Lewis also said the initial investigation revealed that the cause of the fire appeared to be accidental.

“The probable cause was related to the use of a heat lamp, due to the plunging temperatures this week,” Lewis said. “At some point, the heat lamp must have been knocked loose or came in contact in some form or fashion with nearby combustible materials within that outbuilding.”

Additionally, Lewis stressed the importance of getting accurate information when responding to emergency service dispatches.

“Accurate information is very important,” he said. “There were numerous callers and they were all reporting what they thought they saw, which added a twist from the standpoint of thinking that there was a primary dwelling involved. There were also reports of explosions occurring on the property in addition to the animal exposures.

“We actually even added animal control to the assignment due to those initial reports,” Lewis said. “Once we confirmed that was not the case, it became a low-risk incident where we canceled animal control as well as the majority of our resources that were still responding to the fire.”