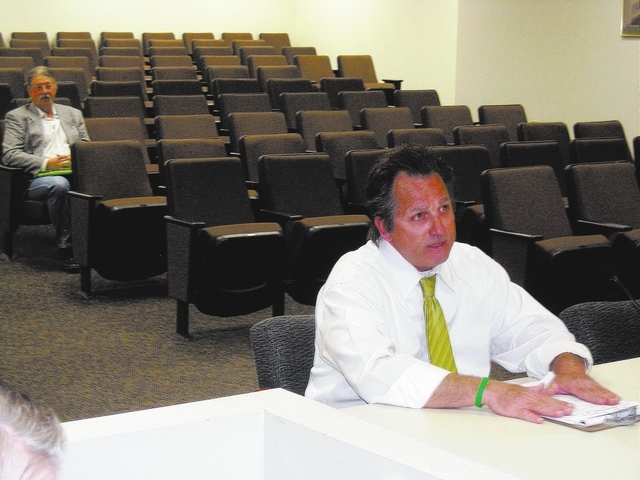 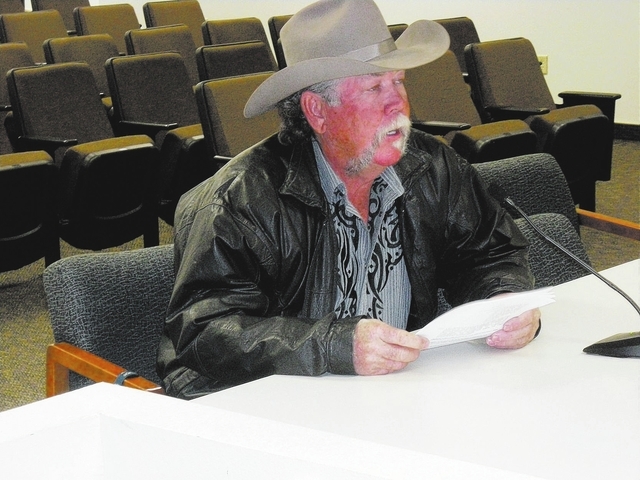 The Pahrump Regional Planning Commission forwarded recommendations on medical marijuana to Nye County commissioners Wednesday, but deleted a prohibition on dispensaries in the bill.

The bill proposes minimum distances of 1,500 feet for medical marijuana establishments from facilities like schools, parks, churches and day care facilities that are not in the state regulations, Principal Planner Steve Osborne said. He also recommended a minimum distance of 300 feet from community facilities, though the bill includes that buffer zone from existing residences as well.

Applicants need to apply for a conditional use permit, which must include a copy of the registration certificate issued by the state; prohibits people from consuming marijuana on the premises; limits signs to two square feet on one wall; prohibits minors under 18; prevents medical marijuana or paraphernalia from being visible outside; requires the installation of surveillance cameras and requires the recording of an affidavit acknowledging the establishment violates federal law.

The ordinance would regulate dispensaries, cultivation facilities, independent testing facilities and the production of edible marijuana. The facilities would be relegated to a commercial or industrial zone under state requirements; planners recommend locating them in a heavy industrial or light industrial zone, but one resident, Tawny Tankersley, said Nye County code doesn’t allow agricultural uses in an industrial zone.

RPC member Bill Dolan wanted to wait until the state finalizes regulations on medical marijuana, which isn’t expected until April. He said the county may have to amend its ordinance later.

But Deputy District Attorney Tim Sutton said the applicants for the licenses only have a limited period of time to apply. Nye County is permitted one license for a dispensary under state law, but Clark County may have up to 40. There is no limit on growing facilities.

“I think we’re putting the cart before the horse until the state finishes their review and puts all their policies and procedures in place, unless the county’s approach is to not allow them, period,” Dolan said.

“The state licensing process is contingent upon getting approval from the local government that you’re trying to build your establishment in. Once the regulations are finalized, there’s going to be a narrow window for them to apply to get these establishments,” Sutton said.

He suggested making any zoning applications contingent on applicants providing their registration from the state.

Dolan added the proposed bill didn’t allow a way to dispense the marijuana after culitvation.

“As a health care professional who has dealt with issues with patients and the need for medical marijuana, we don’t care about you, go to Clark County and buy it,” Dolan said. He said the county should allow facilities here to take advantage of the tax base.

RPC Chairman John Koenig held up a newspaper article that stated the city of Henderson blocked medical marijuana businesses. He added the Las Vegas City Council imposed a six-month moratorium on their regulation.

But Koenig noted Nye County commissioners already had an item on Tuesday’s agenda to schedule a public hearing on the medical marijuana zoning regulations. After no RPC members offered to make a motion, Koenig stepped down as chairman to make a motion forwarding the zoning recommendations to county commissioners, striking the prohibition on dispensaries. It passed unanimously.

RPC member Greg Hafen II was told the county may never see a dime of the tax dollars. “I have a problem with that,” he said.

RPC member Bob King could foresee revisions in the bill if county commissioners elect to go ahead with it. King said he saw a television program about Mendocino, Humboldt and Trinity counties in northern California, where medical marijuana facilities are interspersed with recreational growers.

“The sheriff up there is just running crazy trying to keep everything in check. However, in their county code, they have a restriction that the plant may not be grown until there is someone to buy the product,” King said. He was also concerned about water usage. “If we do elect to go with this, we may want to put some sort of restriction on the number of plants that can be grown and have them already spoken for.”

“The collective will be able to assist 300 miles north and south. I will not be locked into just assisting the people in Pahrump, where apparently if it works the way it’s planned, there won’t be a dispensary but there will be grow facilities,” Augustine said. “If you need people that are already crippled, people already sick, people who are tired of having law enforcement stick automatic weapons in their head, and I fit into that category, you’ve got to reconsider it.”

Construction company owners Larry and Debra Strickland emphasized the economic possibilities. Larry Strickland said he’d like his crews to be able to build the grow houses. He said Colorado, which legalized recreational pot as of Jan. 1, made $1 million in tax revenue in one day.

Debra Strickland reminded the board about the shrimp farm that was supposed to locate in Pahrump, but instead took advantage of an offer at a North Las Vegas industrial park. She suggested a workshop to iron out the issues.

“Let’s not make it so hard for someone to come into this community and make us some tax dollars, because there’s some serious tax dollars here,” she said.

The county has to get involved in approving this, because medical marijuana establishments need permission to build on a property first, she added.

California medical marijuana grower Sam Huntington said, “you need to have a local ordinance before you have a state ordinance and you can have tax dollars coming here.”

Huntington said the county shouldn’t be too restrictive on distance regulations and there isn’t a need for hiding the establishments from the public beyond what state law specifies.

“There’s a potential of large employment and tax revenue from cultivation coming here,” he said.