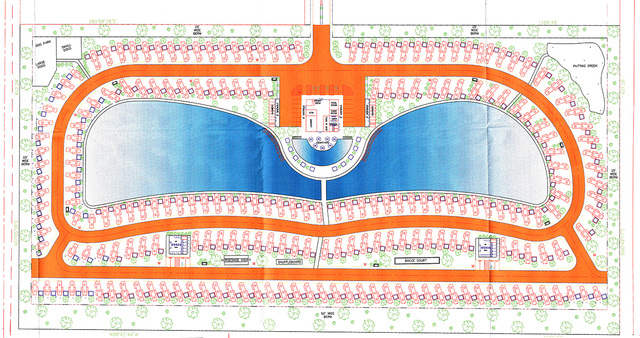 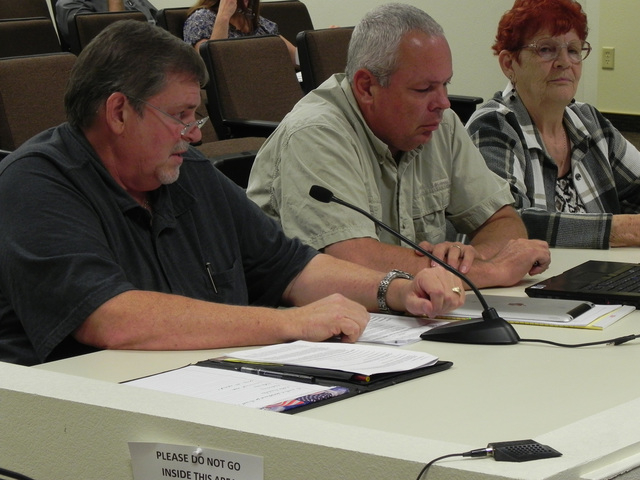 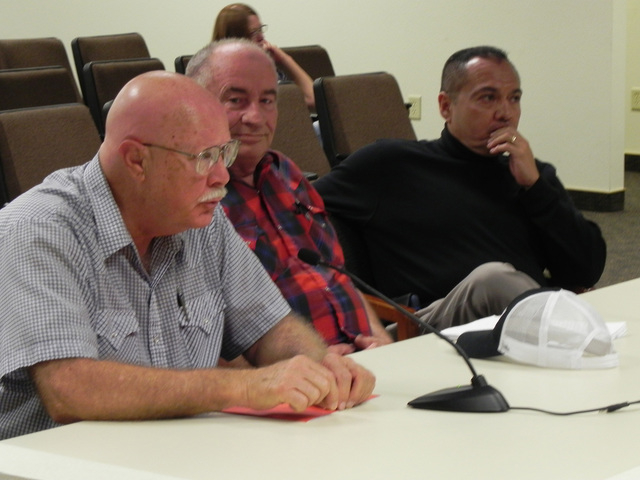 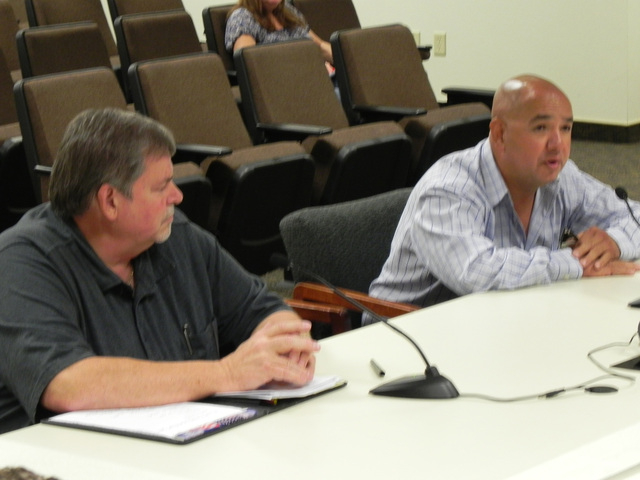 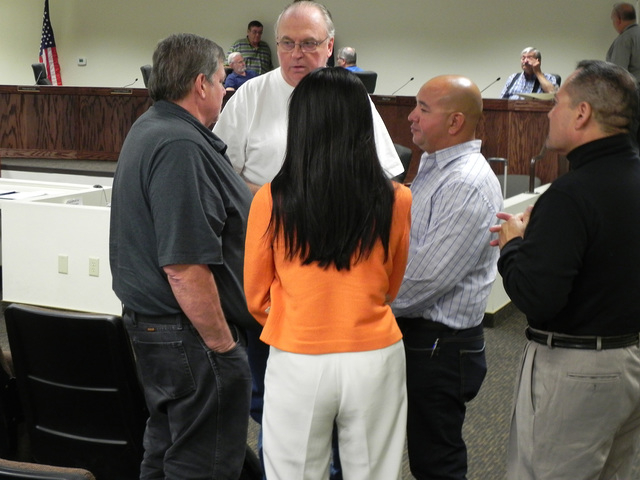 But when Deputy District Attorney Tim Sutton asked him to elaborate why he disagreed with county planners who recommended disapproval on the 13 conditions required for approval, Dolan drew a blank.

Dolan then made the motion to deny the master plan amendment, zone change and conditional use permit. It passed 5-2, with RPC members Vincent Clark and Joe Goode Sr. voting against. Principal Planner Steve Osborne suggested continuing the item to allow the applicants to provide more information and let the Nye County Water District review a proposal for a three-acre lake.

RPC member Greg Hafen II had wrested some concessions from the applicants, such as an eight-foot berm and the donation of water rights to the state.

RPC member Vincent Clark had concerns over the artificial lake. Rene Morales, a principal in the proposed park project, said, “I’d like to see the lake because it’s what makes these RV parks so beautiful,” but he would proceed with the project if it wasn’t approved. Morales said he was proud to work for Wulfenstein Construction when Terrible’s Lakeside RV Resort was built; it features a seven-acre artificial lake.

Consultant Dave Richards, president of CivilWise Services, said some of the arguments would be spelled out in the design phase, not the request for the master plan amendment and zone change. But he said developers are not adverse to participating in improvements to streets and intersections.

“In our view the proposed RV park facility could be disturbing to neighboring single-family residences. In the area at this time are single family homes. Based on the density, traffic and potential water consumption those could potentially disrupt neighboring uses,” Osborne said.

Richards said it would be a high-end, high-class RV park with recreational facilities, lots of green areas, landscaping and security. He suggested residents look at other high-end RV parks in town such as Nevada Treasure RV Park on the far north end and Lakeside RV Resort on South Homestead Road. Richards said they are quiet areas. Developers are planning landscaping, berms or block walls and downward lighting, he said.

“You really need to consider the investments people have made along Leslie based on the old master plan. It is a major thoroughfare. It makes sense there will be developments,” Richards said. But he complained in the revised 2014 master plan that mixed use designation was wiped out.

“One of the concerns put in the master plan amendment is the area is not developed. There is no growth in the area that would justify this development. Well there’s not been any growth or development in Pahrump that justifies any development,” Richards said.

The plan is to build a tertiary sewage treatment facility that was approved by the Nevada Division of Environmental Protection for another project that never went forward and use the recycled effluent for irrigating the landscaping.

“How do you intend to deal with the noise aspect? What I’m anticipating is it’s late Friday evening and there’s a roll of a dozen RVs waiting to check in, get into this park. I would think that would be very disturbing to people that lived in this neighborhood,” Clark said.

Richards said berms can be a good noise deterrent, there’s also setback requirements and other parts of Nye County Code to protect nearby residents. Clark replied the RV park would be surrounded by RE-1 zoning.

Planning Director Darrell Lacy said it’s an area that already has a steady decline in the water table of a half-foot to a foot per year.

“Our biggest concern should be the fact we do not know how much water flows under this valley,” resident Jane Schmidt said under public comment. “There’s no need for 213 water sucking RV spaces and a three-acre water-sucking pond.”

Leroy Pilkenton asked, “if the water goes down and my well goes down who’s going to pay for deepening my well?”

Carl Jakob derided comments Leslie Street was a major thoroughfare. “If they did a car count between Basin and Charleston Park they’d be lucky to get 2 percent of what Homestead (Road) cars are.”

Lori Benton, who lives at 731 S. Leslie St., wanted to know how many months they would have to put up with the dust and the noise during construction.

Sandy Hollingsworth had concerns over the children waiting at bus stops and the traffic from the RVs.

Michael Ideker said he was a land developer. A project like this could bring a lot of jobs, not only during construction but for operation and maintenance.

“There’s going to be add-on money by visitors we hope to draw to Pahrump,” he said.

Michael Livingston, an architect and planner, said the developers are looking at building a senior living project on some of the remaining 55 acres, using profits from the RV park.