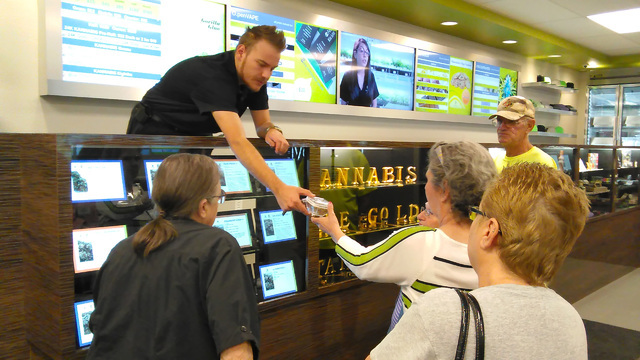 Grove dispensary Manager Zachary Wright provides information on medical marijuana. The facility opened its doors to Pahrump seniors last week who want to learn more about what Wright said are the positive benefits of the drug. Selwyn Harris/Pahrump Valley Times

Officials at The Grove dispensary on East Basin Avenue provided information about the product and the benefits derived from the use of medical marijuana.

One senior, Rosemarie Coppa, said she thought the tour was quite educational.

Coppa said she has an adult daughter who has suffered from several health-related maladies for many years.

She spoke about a strain of marijuana known as “Head Cheese.”

“I truly believe she could use benefits from medical marijuana because she gets depressed at times and she’s also very high-strung,” Coppa said. “She has all of the things that I think the Head Cheese marijuana will alleviate.”

Though Coppa said she has never tried marijuana before, Thursday’s tour of the facility changed her mind about the substance.

As far as the method of ingesting the product, Coppa said she would opt for the edible varieties, rather than smoking it.

An olive oil infused creation on display caught her interest.

“I could put it on my pizza or in a salad, but you can’t cook with it because it will burn all of the medical properties out of it,” she said. “I have a friend whose daughter suffers from seizures and she takes medical marijuana, and it is very effective according to her. Never in my life would I think I would see marijuana labeled as a medicine.”

Coppa was touring The Grove’s sales floor with Pahrump resident Jennifer Paris, who said she thought the tour was not only informative but fascinating.

“I have tried it on a couple of occasions in my lifetime, but I didn’t like it because it made me very paranoid,” she said. “I understand the different strains that they have here can alleviate certain conditions, which would be beneficial to me. I think I certainly would try it again, but I won’t try the marijuana that’s sold on the streets.”

Paris also said she would apply for a medical marijuana card and provide the information she learned from the tour to her adult grandchildren.

“I really came out here for my adult grandchildren because they didn’t have any information on it,” she said. “I now know that there are specific strains and prices. When I do try it again, I don’t think I will smoke it. I will try the edibles.”

Another senior who took the tour preferred to remain anonymous.

He too said the trip gave him a better understanding of the drug.

He noted that a close friend recently offered him some medical marijuana.

“I figured what the heck, so I tried some,” he said. “Not long after, I got the munchies,” he said with a laugh.

Additionally, the man who said he has long suffered from the condition known as Peripheral Neuropathy said the marijuana made a profound difference after roughly two weeks.

The condition causes severe numbness in the feet and hands.

He noticed the difference after stubbing his toe while exiting his shower.

“I said holy cow this really hurts,” he said. “My wife told me I wasn’t supposed to have any feeling in my feet due to my condition, but now I do. I reached down and had feeling in my toes. It was amazing, so I decided to go on this tour to learn more about medical marijuana. I am sure it was a direct result of the medical marijuana I tried for two weeks.”

As a result, the man said he’s since applied for a medical marijuana card.

“I don’t necessarily want to smoke it all the time, but I understand there are edibles that people can eat like candies and cookies,” he said. “If it helps you live a healthier life and being pain-free, I think it’s worth it. It’s relatively safe, and I have never heard anyone dying from an overdose of marijuana.”

Since opening in March of this year, the facility dispenses anywhere from $4,500 to $6,000 worth of product each day, while serving upward of 52 patients daily.

The Grove dispensary is located at 1541 E. Basin Ave.

For more information on obtaining a medical marijuana card, contact them at 775 556-0100, or visit them online at www.TheGroveNV.com.