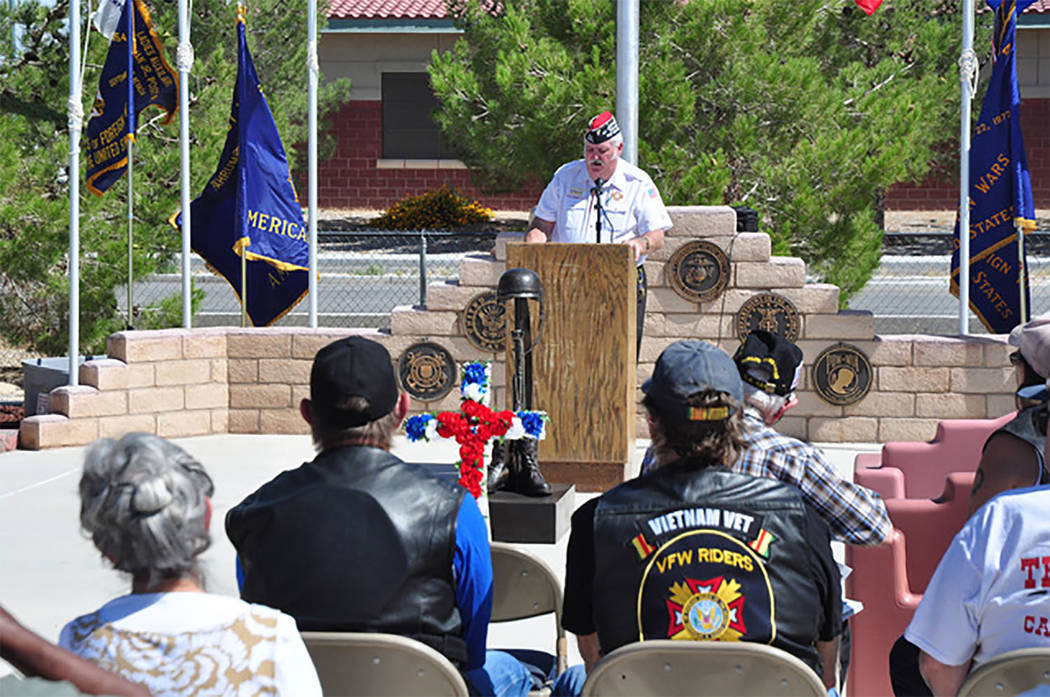 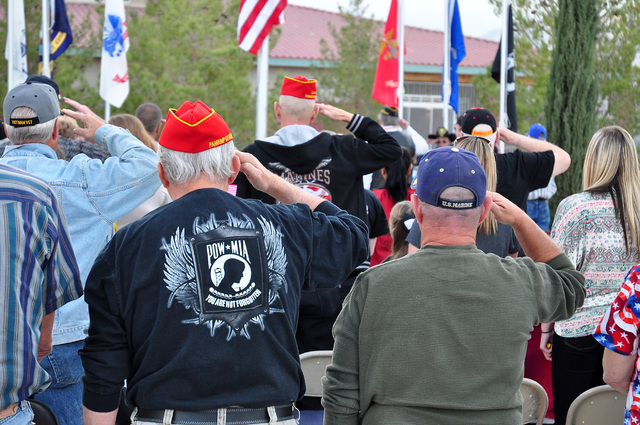 There will be no shortage of local Veterans Day observances on Saturday, honoring the more than 9,000 veterans living in Nye County, the first of which is scheduled for Saturday at the VFW Post 10054, at 4651 S. Homestead Road.

Post Commander Tom Vick said the ceremony will begin on the 11th day at the 11th hour, during the 11th month.

“Veterans Day always begins at 11 a.m. sharp,” Vick said. “We will have our ceremony on the VFW grounds in front of the flagpole, with a flag changing ceremony. After that, we will hold our flag retirement ceremony at 3 p.m., with the local Boy Scouts. The Nevada Silver Tappers will be here joining us this year. They will be performing a flag dance, which will be right after the ceremony.”

Vick also said activities are planned throughout the day inside the VFW Post.

“We will have karaoke in the afternoon and lunch will be served throughout the day,” he said. “Anybody can attend our VFW ceremony on Saturday. It’s not just for veterans and their families. The Veterans Day ceremony at the VFW here has been in existence at least since 2003 when I took over as commander. We’ve been doing this for quite some time.”

Later in the afternoon on Saturday, the Veterans Memorial at Chief Tecopa Cemetery will host a second Veterans Day ceremony at the site along the 700 block of East Street, adjacent to the community library.

The 4 p.m. observance is coordinated by members of Pahrump’s Disabled American Veterans Chapter 15 in Pahrump.

Cles Saunders, 1st Junior Vice Commander of the organization, said he’s hoping have much support throughout the town.

He noted the ceremony is expected to run roughly 45 minutes to an hour.

“We want to get more participation from the community to honor our veterans,” Saunders said. “We invited the Pahrump Valley High School Key Club to the ceremony. They will convey patriotic messages during the ceremony. We will also have the high school JROTC honor guard as well as the band performing patriotic-themed music.”

Additionally, Saunders said he plans to show a video presentation at the site.

“I’m not sure whether I can include that in the main ceremony, but I will try,” he said. “If people want to stay after the main ceremony, they can view it. This is our first Veterans Day event for the DAV Chapter 15. We also had a Purple Heart Day ceremony at the veterans section of Chief Tecopa Cemetery.”

Also on Saturday, officials at Pahrump’s HealthCare Partners is hosting a special event for all veterans.

A news release stated the event is a private screening of the motion picture “Thank you for your Service,” from 6 p.m. to 8 p.m. Saturday.

Those who can’t attend the movie may want to consider the Pahrump Elks Lodge at 2220 East Basin Avenue.

The facility is hosting its annual Veterans Day Appreciation Dinner on Saturday at 6 p.m.

The event is to honor military veterans in and around the Pahrump Valley.

On the menu is pork loin, mashed potatoes and gravy, green beans, along with a salad and dessert.

All veteran meals are free.

The cost for non-veterans is $8.

Bearing down on century mark

When World War I hostilities ceased on Nov. 11, 1918, that day was commemorated as Armistice Day a year later by President Woodrow Wilson.

Roughly 20 years later, in 1938, Armistice Day was officially made a legal public holiday, according to the U.S. Department of Veterans Services.

Later, in the wake of more lives lost during World War II and the Korean War, Armistice Day was renamed Veterans Day in 1954.