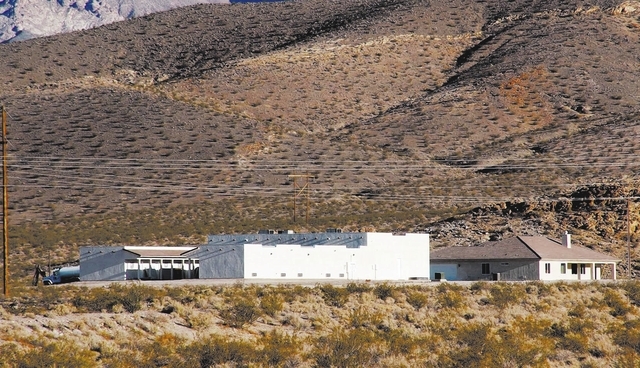 BEATTY — One brothel near this community of just over 1,000 people closed last summer, Bikini’s, while the owner of another, Angel’s Ladies, is scheduled to appear for a show cause hearing soon before the Nye County Licensing and Liquor Board.

Guy Brenkman was given the seventh brothel license in Nye County in January 2011 for Bikini’s, a strip club and brothel about two miles south of Beatty on the turnoff to Airport Road.

He soon ran afoul of authorities and other brothel owners, after a flyer surfaced depicting a sex act and there were complaints about signage on Highway 95.

Bikini’s license wasn’t renewed after it expired in June, according to Sheriff Tony DeMeo. Brenkman, 66, died Sept. 25. His funeral was held in his hometown of Peoria, Ill.

DeMeo said under the brothel ordinance the club could advertise nude girls, but the ordinance regulates the size of signs that say “brothel.” DeMeo said if someone wanted to complain about the signage, they could file a nuisance complaint. A probate hearing on Brenkman’s estate is scheduled in Fifth District Court Tuesday.

Dennis Hof, owner of Dennis Hof’s Love Ranch in Crystal and the Area 51 Cat House in Lathrop Wells, as well as the Moonlite Bunny Ranch near Carson City, summed up why Brenkman’s business didn’t make it. Brenkman hoped to attract people flying into Beatty Airport; Brenkman himself used the airport to fly his plane up to the Midwest.

“He was a very nice guy, but he was a train guy. That’s where he made his money. He was in the strip club business so he had some idea how they operate. But the things that worked against him, he didn’t understand the business. He didn’t have the ability to get the right girls in there and Beatty is not a good location,” Hof said. “There’s not enough business between the three of them for one good brothel.”

Nye County Commissioner Butch Borasky said he asked to hold a show cause hearing on Angel’s Ladies, a couple of miles north of Beatty, to verify some information that has come to his attention. He didn’t elaborate on the specifics.

Angel’s Ladies owner Mack Moore, now 85, said he was unaware he’d be asked to appear for a show cause hearing. Moore said he sold the business four years ago to a man from Oregon.

“I sold it for $1.8 million and he paid $800,000 down and he gave a $1 million promissory note to me and my wife. He’s supposed to be making payments. I had a lease with him to live here. But my attorney said that the lease was not proper. I was still the owner of it, if he wants to be an owner he’s paid about a half a million on that $1 million promissory note,” Moore said. “He paid $500,000 on the promissory note and he doesn’t think he needs to pay any more.”

Moore said the licensing and liquor board has to know if someone has an investment in his brothel but the investor doesn’t have to get a brothel license. But George Flint of the Nevada Brothel Association said the county brothel ordinance requires board approval before any contracts are signed relating to the business. Flint said his brothel association now only represents Hof in Nye County.

Moore tried to sell Angel’s Ladies once before in 2007, but ended up taking it over again through foreclosure a couple of years later. The sale includes 14 acres.

Moore has continued running Angel’s Ladies; he said the license is still in his name.

Hof said it would help the brothel business here if 18-year-olds were allowed to go into the brothels, like up north.

“In Lyon County, where I have four brothels, an 18-year-old can come in. They just have to be kept away from the bar,” he said, adding that would cater to the military business.

The county should also allow customers to take prostitutes out on dates, said Hof, who has become famous through his “Cathouse” TV series on HBO.

Moore said his business dropped off a lot because of the recession. He said they used to have 25 customers every 24 hours, including truck drivers who would spend hundreds of dollars.