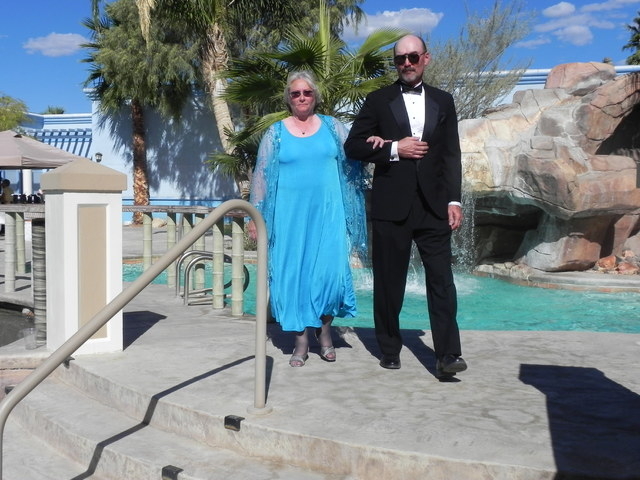 Wehrly said she had a doctor’s appointment scheduled for an eye problem in the afternoon.

“I will have my eyeball completely dilated tomorrow about 3 p.m., 3:30 p.m., so I will not be anywhere,” Wehrly said.

Wehrly said she has a macular hole, a tear close to the retina, where the optic nerve attaches in the back of the eye.

When asked what would be her response to opponent Rick Marshall’s campaign, Wehrly said, “she’s going to see if her eyeball is falling out.”

“Those appointments, you can’t change them,” she said.

Tuesday would have been the last meeting between the two candidates before the Nov. 4 election.

The invitations to both candidates by KPVM owner Vern Van Winkle said the station was coordinating one last sheriff’s debate for a live television audience, moderated by Jim Mutton, a former Pahrump town board member, nuclear physicist and former college professor. Mutton used to be the co-host of a KPVM television show “Issues and Perspectives.”

The invitation pledged it would be a professional setting with “no mockery type of actions allowed,” nor personal questions of either candidate.

Questions were to be submitted by phone and email. After a standard three-minute opening, the candidates would have two minutes to answer questions, a one-minute rebuttal, 30-second rebuttal and finally a two-minute closing statement.

“Vern Van Winkle has been trying since September to get a date from both camps,” Marshall said. “We said in the very beginning we would debate anywhere, any time. We have honored that commitment to the voters of Nye County, we have cancelled appointments, we have cancelled scheduled events so we could be here. I even flew home from Carson City to attend the Nugget debate during the primary.”

Marshall said debates are a chance for voters to learn about the candidates for themselves.

“This is a chance for the voters to assess each candidate, to talk to them, to learn their knowledge of the job and see how they would react in an unscripted environment,” Marshall said. “Mr. Van Winkle called me last week, I immediately accepted, I cancelled an appointment in Las Vegas I had because it is that important to the voters.”

Marshall said her desire not to debate him directly is “a direct result of her performance in the last debate.”

“As the sheriff you have to make last-minute decisions and you have to be accessible to your constituents and that begins in the election process,” said Marshall, who planned to appear on television Tuesday without Wehrly to take calls.

Marshall appeared in a call-in talk show by himself Tuesday evening.

Wehrly previously objected to Van Winkle’s invitation to a live debate Aug. 28. In a letter to Marshall, Wehrly wrote “it is my belief our debate should be conducted in front of a live audience with uncontrolled access to the Nye County voters and news media.” She didn’t want one single entity to monopolize the event.

The Marshall campaign rejected Wehrly’s suggestion, calling it not a real debate but a candidate’s meet and greet.

Wehrly declined an invitation to attend a Nye County Republican Central Committee debate in August because a family member entered hospice. On another occasion, Wehrly said she was taking a class in Reno for her Peace Officer Standards and Training certification.

Both Marshall and Wehrly met up in Tonopah. Then despite all the maneuvering on debate protocol, when both sheriff’s candidates debated each other for the first time in Pahrump it was in front of a sometimes rowdy crowd packed into Veterans of Foreign Wars Post No. 10054 on Oct. 10 that shouted questions at the two candidates and other political hopefuls.

Though both candidates already met four times to discuss the issues, Marshall said, “my belief is Channel 41 would not be putting this on unless there was a demand for it from the public. Evidently Vern got enough demand from the public to schedule it.”

Marshall and Wehrly emerged from the 10-candidate primary field in June as the top two vote earners, with Wehrly taking 23.8 percent of the vote with Marshall grabbing 16.3 percent. Marshall, however, has outpaced his opponent’s spending, dropping $53,418 compared to Wehrly’s $38,826.

• In another heated campaign, District Attorney candidate Angela Bello said she wanted to refute statements she said incumbent Brian Kunzi made on KNYE radio that she lived with friends in Pahrump and didn’t have a lease. Bello said she moved to an address on Bourbon Street months ago and has a lease with Provenza Realty.