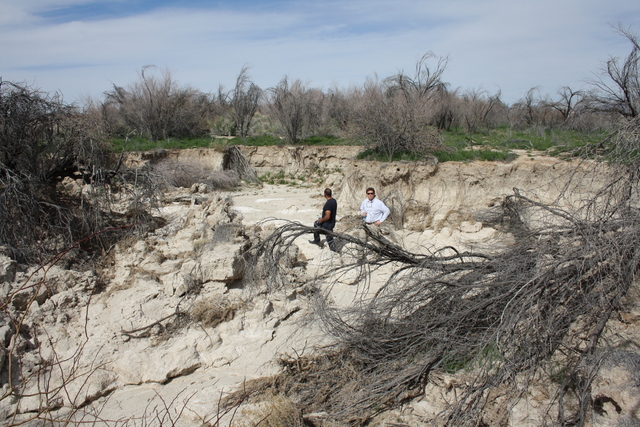 The U.S. Fish and Wildlife Service has 90 days to return water to Ministerio Roca Solida, a private church ministry located in the Ash Meadows National Wildlife Refuge, according to the state.

On Nov. 4, the Nevada Division of Water Resources ordered the federal agency to cease diversion of water through the Ministerio Roca Solida parcel after the investigation found several violations of the terms of the ministry’s water permits.

In 2010, the U.S. Fish and Wildlife Service diverted the creek away from the Ministerio Roca Solida where Victor and Annette Fuentes, the leaders of the ministry, had founded the Patch of Heaven church camp. The agency cited the need to preserve endangered species, including the Ash Meadows speckled dace that inhabit the refuge.

“Getting the water returned would be a major first step in making the ministry whole, after years of suffering litigation and egregious constitutional violations by the U.S. Fish and Wildlife Service,” said Joseph Becker, director of Nevada Policy Research Institute’s Center for Justice and Constitutional Litigation, who represents the Fuentes.

Becker argued that the diversion of the waterway and taking of the ministry’s vested water rights was done without the Clean Water Act permits, in violation of Federal Emergency Management Agency requirements, and with no regard for the ministry’s use of the water for baptisms.

The diversion also resulted in repeated flooding of the church’s property.

The federal government, however, has denied any liability for the flooding and argued that the ministry had no rights to the water that had traversed its property.

While the order from the Nevada Division of Water Resources verified the institute’s claim that the ministry’s vested water rights were violated, the ministry continues to suffer “significant damage and constitutional violations,” Becker said.

“The ministry still suffered significant harm in the interim from the federal government’s actions, including repeated flooding and five years of flood damage resulting from the illegal water diversion project,” Becker said.

He called the state’s order a boost to the “takings” case against the Fish and Wildlife that was brought by the Nevada Policy Research Institute for diverting water from the Ministerio Roca Solida. The case is currently pending in the U.S. Court of Federal Claims.

Fish and Wildlife has multiple water rights within the refuge that are on file with the State Engineer. The entity said that it had acquired these permits “to re-establish historic natural drainage patterns and wetlands within the refuge.”

According to the order from the state, the U.S. Fish and Wildlife Service must return the water to its “historic path” traversing the church property, within 90 days, or face administrative fines up to $10,000 per day until corrective action is taken.

Failure to take corrective action will result in the matter being referred for additional action available to the state engineer.

Possible penalties for noncompliance can include payment of an administrative fine not exceeding $10,000 per day for each violation, replacement of not more than 200 percent of the water used, and payment of the costs of the proceeding, including investigative costs and attorney’s fees.