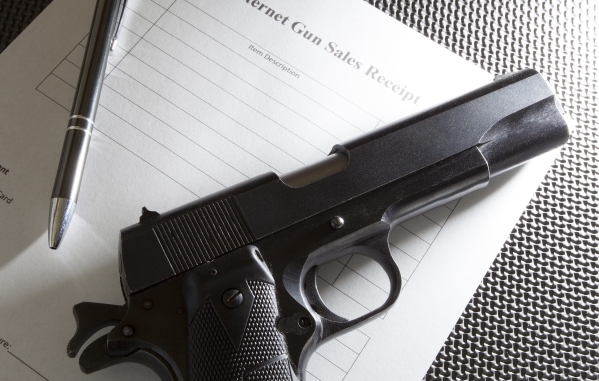 Nearly one in 11 people shopping for guns online in Nevada is prohibited from possessing a firearm, according to a study by Everytown for Gun Safety released Jan. 29.

“Frontier days seem distant in Nevada, where the rugged landscape has recently acquired a 21st-century sheen. Cities have sprouted in its deserts. Technology companies like Tesla Motors and Faraday Future vie for the state’s workforce,” the report said. “But invisible to most Nevadans, an unregulated commerce in firearms continues. And it’s facilitated by the same digital platforms driving the economic boom.”

The websites were monitored for different amounts of time and using different methods. For Armslist and Gunlistings, all ads posted offering firearms for sale or trade were collected with a computer program on a daily basis for a year, from Nov. 1, 2014, to Oct. 31.

Listings on Backpage were collected for 80 days in the fall, and an “investigative agency” was hired to manually track posts on 27 Facebook groups for about a month starting Dec. 25, according to the study.

Everytown for Gun Safety Research Director Ted Alcorn said the reason for the differences in monitoring periods is because of the differences in how the websites work. A computer program wouldn’t be able to track Facebook like the other sites, so staffers spent eight-hour shifts manually going through posts on the social media site.

“It’s very labor-intensive,” Alcorn said, adding that despite the differences, the data were consistent among the sites.

“We wanted to ensure that we’re using the gun sale ads as a proxy for gun commerce,” he said. “You can infer a lot by looking at those ads.”

The Everytown researchers, about 10 people, identified 13,570 unique ads for firearms for sale during their study. The group used that rate to estimate that private-party sellers in Nevada would post 35,862 firearm ads to the four websites each year.

Most sellers appeared to post just one or two ads during the observation period, but a small number of sellers offered guns in higher volumes, which Everytown said might mean they were unlicensed dealers. On Armslist, six sellers posted 25 or more ads in a year — including one seller who posted 157 ads.

One seller posted 13 unique ads on Facebook over four weeks, and nine other users each offered six or more guns. These sellers accounted for 9 percent of gun ads posted by Nevadan sellers (81 of 962 ads), according to the report.

The study included an undercover operation — researchers placed ads for guns and followed up with respondents to see if they were barred from having a firearm because of convictions for a felony or domestic abuse.

Investigators posted 19 ads selling firearms for sale on the websites Armslist and Facebook from Aug. 24 to Sept. 17. Investigators received 394 responses to the ads and used information the would-be buyers voluntarily provided to identify 229 unique Nevada residents.

Ninety-eight percent of the respondents were men, ranging in age from 19 to 74 with a median age of 33.

They then analyzed court records — any felony convictions, domestic violence misdemeanor convictions, bench warrants, protection orders, or other records that could be linked to the individual — to determine if they were prohibited the possession of firearms under state or federal law.

The group found that 8.7 percent, 20 of the 229 respondents, had been convicted of crimes that prohibited them from possessing firearms. At that rate, online gun sales from these four websites would put an estimated 3,132 guns into the hands of felons and domestic abusers in Nevada every year, according to the report.

And that estimate may be low — Everytown couldn’t examine records that would indicate noncriminal prohibitions such as severe mental illness, dishonorable discharge from the armed forces and immigration status.

Alcorn said the numbers show that criminals who would be blocked by background checks by licensed dealers and at brick-and-mortar stores are flocking to the Internet.

Background checks blocked more than 5,000 gun sales to prohibited people in Nevada from 2012 to 2014, according to an Everytown analysis of FBI data. Those denials made up 1.3 percent of gun sales, but the buyers who are prohibited made up 8.7 percent of the study’s respondents. At that rate, in a single year, just four websites in Nevada could put more than 3,100 guns into the hands of felons and domestic abusers, the study said.

The study includes some examples of prohibited possessors, such as a 23-year-old man who inquired about a handgun ad posted by Everytown. Six years ago, the man shot three people in Reno.

In another example, a 21-year-old man with convictions for possessing a stolen handgun and removing a serial number from a gun aggressively tried to buy a firearm listed in one of Everytown’s posts. A month later he was arrested with a handgun.

“The prior criminal histories that these (people) had is shocking,” Alcorn said. “These are the kinds of individuals we’re talking about.”

In every example the names of the prohibited possessors was redacted, but Alcorn said the information was passed on to law enforcement.

Everytown for Gun Safety is advocating for the passage of a November ballot question that would extend background check requirements to private-party sales, including those done via the Internet. Rather than transactions done in parking lots, the law will require private sales be conducted with licensed dealers, Alcorn said.

Gun rights groups have said the language in the voter initiative is vague and would criminalize some normal behaviors of law-abiding gun owners, such as loaning a gun to a friend.

“Over the last two years, more and more people have been using Facebook to discover products and to buy and sell things to one another. We are continuing to develop, test, and launch new products to make this experience even better for people and are updating our regulated goods policies to reflect this evolution,” she said in a statement.

Alcorn said the move by Facebook sends an important message about corporate responsibility, but there should be legislation in place to regulate online sales of firearms.

“There’s plenty of other websites in Nevada,” he said.