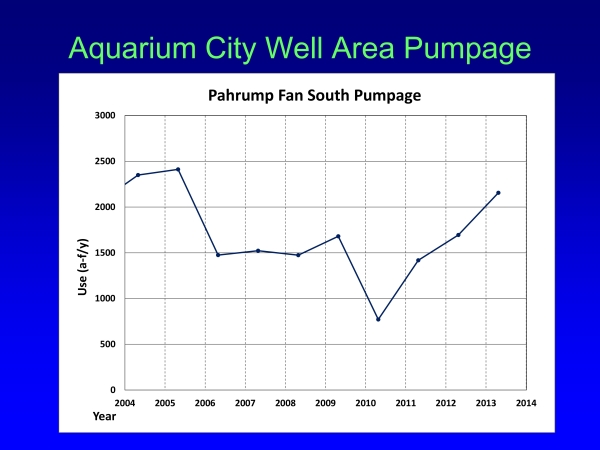 Domestic well owners now can get information on changes in water levels and pumpage across the Pahrump Valley thanks to a few recent studies.

The hydrostratigraphic assessment and climate response studies were conducted by Leising Geoscience and initiated by the Nye County Groundwater Management Plan Advisory Committee to identify areas in the Pahrump Valley where water levels are dropping and possibly try to move pumping to the areas that have more water available.

Joseph Leising, principal at Leising Geoscience, who presented the results of the hydrostratigraphic assessment and climate response evaluation in the Pahrump Valley to the Nye County Water District Governing Board on Monday, said the hydrologic similarity between the Pahrump and Las Vegas Valleys was at the basis of the study.

“Within the (Pahrump) Valley, I looked at the Pahrump sub-basin up in the northern part of the valley, I looked at half of it and estimated the amount of water that is not being recharged based on pumping, based on water changes down below and water assumptions,” Leising said.

According to the study, Pahrump Valley has an estimated recharge of 20,000 acre feet of perennial yield, and the depreciation of water levels occurs in the most populous parts of Pahrump.

While the study showed water declines occur below the areas that are pumped the most, it also identified water resources on Trout and southern Carpenter fans and source areas on Pahrump and possibly Manse fans.

Earlier analysis of 10 years of data from well level measurement throughout the Pahrump Basin showed an overall steady decline of approximately one to two feet per year in water levels in portions of the Pahrump Basin.

“The best fit that I obtained suggests that domestic use in the vicinity of half an acre foot or maybe 27 of an acre foot per year per domestic well,” Leising said.

Nye County Water District Governing Board Chair Greg Dann said the high concentration of water production wells along the Highway 160 corridor contributes to the diminishment of the water farther downstream from the Spring Mountains.

“As far as the domestic well owner, I think there’s sufficient information out there now for the make of proper choice where they want to live and at what depth of water they want to pump up from the ground to their house,” Dann said.

Several Pahrump residents however argued about the efficiency of the assessment.

“In my opinion, and what I would tell anybody is it didn’t do anything to address the water situation,” Pahrump resident Dwight Lilly said.

“There’s one thing that we can utilize this for in a very short-term fashion,” said Nye County Planning Director Darrell Lacy. “We, as a board, are reviewing water rights transfer in a basin today. This is (to) help us to identify basins that are essentially fully appropriate or some basins within the overall basin and we can utilize it if someone wants to make a large move of a water right to an area that’s based on this study doesn’t have the water available to us, then we can count down if you want to use this water … you don’t have to go somewhere other than right here to pump it.”

The study is yet to be finalized, but Dann noted that a further development of the plan would require more funding.

“When he comes back with his final presentation, his final report, and maybe in a binder, that gives everybody up here, seven people here, the staff, the county commissioners, it gives everybody something to go by where they can make appropriate decisions,” he said.