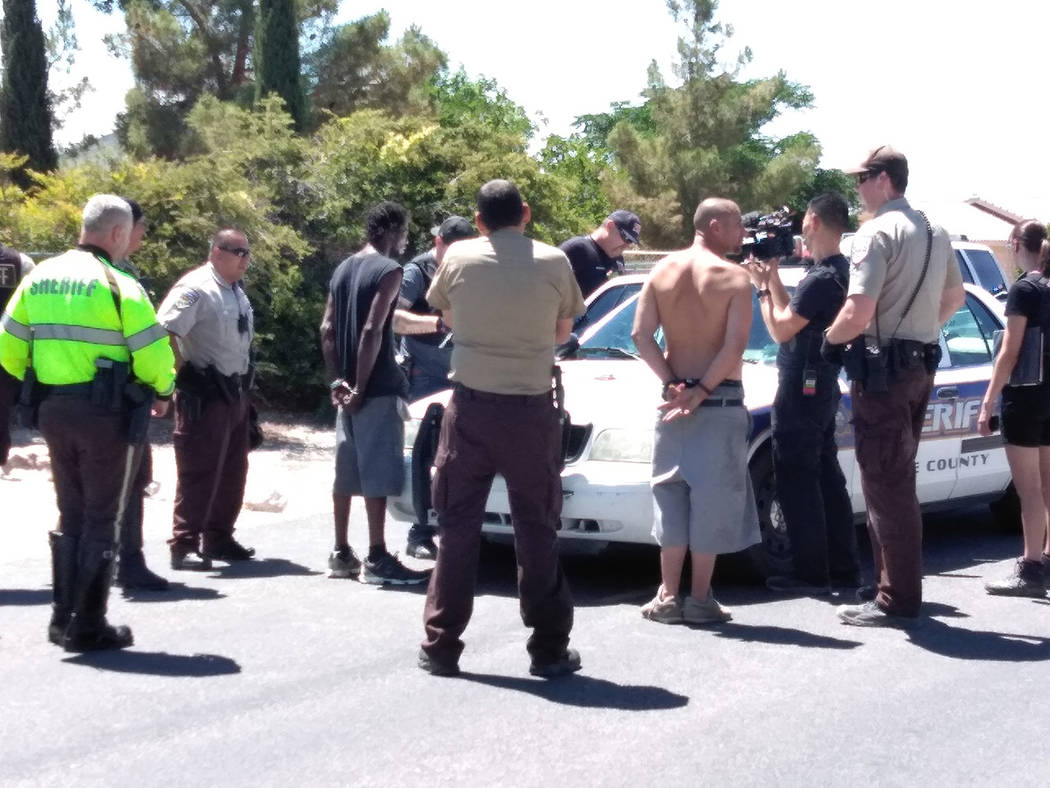 Selwyn Harris/Pahrump Valley Times Two of three suspects are seen detained in handcuffs awaiting transport to the Nye County Detention Center Tuesday afternoon. The trio led sheriff's deputies on a brief pursuit after the driver failed to pull over for a traffic stop along Highway 160. The sheriff's office has yet to release details on the incident.

What initially appeared to be a simple traffic stop led to a brief pursuit and the arrest of three individuals.

The incident began just before 2 p.m. on Tuesday, June 19, when a Nye County Sheriff’s deputy on his motorcycle attempted to perform a traffic stop on a vehicle traveling southbound along Highway 160, when the driver of that vehicle refused to pull over, leading the deputy on a brief pursuit.

According to communications between Nye County dispatchers and the deputy, the driver of an early model light blue sedan turned onto Calvada Boulevard from Nevada Highway 160.

The deputy continued following the fleeing vehicle to South Mount Charleston Drive, then onto Hacienda Street, where the driver eventually pulled over.

He and two passengers in the vehicle were held at gunpoint until other deputies arrived on scene to assist.

Pahrump resident Daniel Devine, whose family lives on Hacienda Street, was arriving home when he noticed the situation unfolding just feet from his front yard.

“I saw the three people detained in handcuffs while the deputies were searching the car they were in,” he said. “It looked like drugs may have been involved. I was just coming home from lunch and saw a bunch of cops in front of my house. I could not get to my house for about 10 minutes, so I just backed up and circled around to get home. For the four years we have lived here, we have never really seen any incidents like this one. I’m just happy that they were able to get all of the suspects, and no one got hurt.”

The Nye County Sheriff’s Office has yet to release any details about the incident, which was all captured by crew members from the popular Live PD television broadcast on the A&E network.