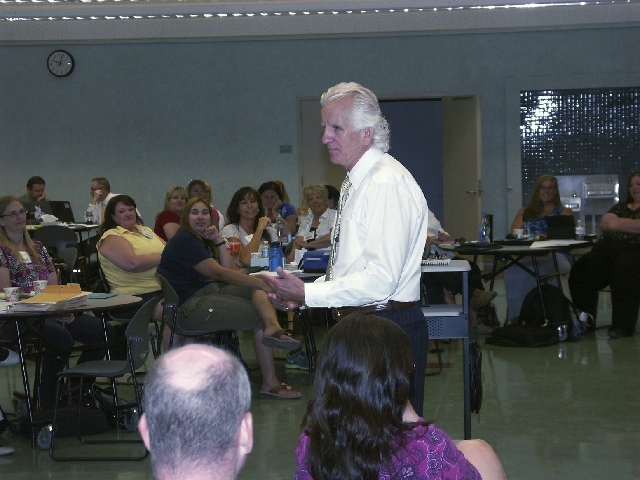 Some of the new teachers will become part of the district’s Special Education program.

Those educators were all officially introduced this week during the district’s teacher orientation at Rosemary Clarke Middle School.

General education teachers will take part in their orientation next week.

Simatos said about him, “He has done a lot of research on discipline, school violence, psycho-educational assessment and related special education issues. He is also a noted speaker who provides consultative services for many regional, state and national conferences. We are fortunate to have him for our teacher orientation this week.”

District Superintendent Dale Norton said the additional staffing was just what the district needed after layoffs and retirements over the past several years.

In 2011, the district relieved more than 50 staff members of their jobs as part of budget cuts.

Last year, the district was forced to cut more than 70 positions to shore up a $6.5 million budget deficit.

“After the four years of RIFF’s, cuts and bumps, this is very exciting because we have had several retirements and late resignations for whatever reasons. The training this week was mainly for the special education teachers. The general education teachers and administrators could also attend if they chose to,” he said.

The addition could not have come at a better time as the district’s all-day kindergarten program also begins this year.

“The all-day kindergarten law brought in some new positions for us that were added. I want to say it’s somewhere around 10 to 12. Of those 40 positions, about a quarter of them are be for the new kindergarten positions. Some of which transferred into those positions which opened up other positions,” the superintendent said.

Norton also said that a few of the teachers are already familiar with the school district.

“Uniquely enough, some of the people who are coming in are people who are returning to Nye County. I know one for sure. They relocated for one reason or another and some are now coming back. The funding for the kindergarten position was funding that was brought about through the legislation process. It’s not 100 percent funding for us because a good portion of the funding was brought back through the recent legislative session which was tremendous,” he said.

This year, Nye County schools got a boost of $1.6 million in extra revenue thanks to state legislators.

Lawmakers in Carson City voted earlier this summer to approve an increase in the district’s Distributive School Account (DSA) funding by $368 per student.

The DSA determines how much the district will receive from the government for each student enrolled.

“We were frugal last year in many ways which helped us have a little bigger ending fund balance which allowed us to move forward with some additional staffing. You still have to take into consideration that not all of those 40 positions are new. Of the new ones about a fourth are for the kindergarten program,” he said.

Norton said that the new hires will take positions throughout the vast 18,000-plus square mile school district.

“Gabbs, Round Mountain and Tonopah I believe each got one additional kindergarten teacher. We did not need to do anything in Beatty because their numbers were not that high, nor was Amargosa. The schools in Pahrump scattered through the four elementary schools we will have one to three teachers in the kindergarten program. Manse right now sits pretty good because they already had full-day kindergarten in place under a grant,” he said.

Additionally, Norton said that the extra staffing will help cut down on overcrowding for the younger students at the elementary school level.

Zone variances too will be watched very closely.

“The law is very specific. We cannot exceed 25 students in a classroom — period. It is against the law. Twenty-five to one is the mandatory state cutoff. For those parents who have requested and have been granted a zone variance, it is with acknowledgement to the parent to let them know that if we hit that 25 mark, they may be asked to take their child back to their original home zoned school because we cannot exceed that,” he said.

Zone variances allow parents to enroll their child into a school of their choice only out of necessity.

“There are custody issues and we have staff members who may be working at another school and they can take their child to that school. There is a multitude of reasons why they request that and I can understand all of them. However, I hope that they would understand our policy and our regulations and certainly would hope that they understand that I’m up against the law on the kindergarten classes being 25 students to one teacher,” he said.