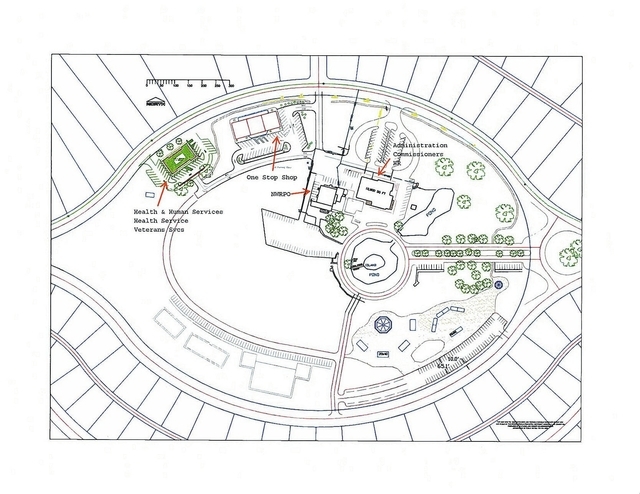 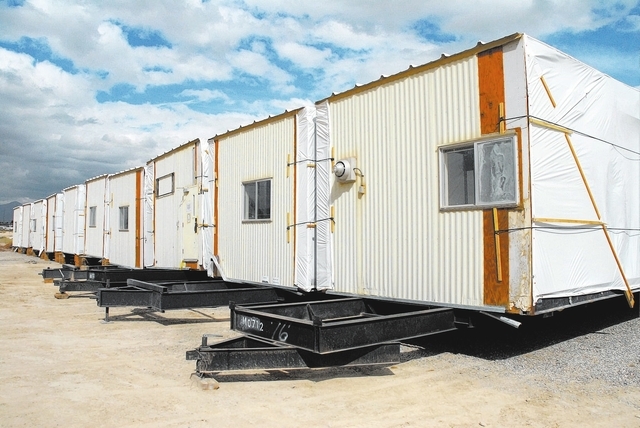 The 10 modular buildings sitting on the Calvada Eye were acquired by Nye County from the Yucca Mountain project and are waiting to be assembled as the new One Stop Shop, incorporating county planning, the building and safety department, public works and code compliance department in one location.

It is part of a continuing attempt by Nye County to consolidate its operations in one location on the Calvada Eye. The county acquired the 32-acre Calvada Eye which is slowly filling up with county buildings, for $3 million after Preferred Equities Corporation declared bankruptcy in 2002.

County commissioners awarded a $195,375 contract to Pac-Van Inc. of Las Vegas back in June to set up a dozen 60-foot by 168-foot modulars for the One Stop Shop at the Calvada Eye and five 12-foot by 60-foot modular units for an Amargosa Valley Senior Center. The county is using $140,188 in bond money for the new jail project for part of the cost. Commissioners allocated $850,000 for the entire One Stop Shop project.

Commission Chairman Butch Borasky said the final plans haven’t been completed for the One Stop Shop, which will be located between the Nuclear Waste Repository Project Office and the new Nye County Health and Human Services building.

“We have to pull all the permits and do all the things everybody else has to do,” Borasky said.

County Manager Pam Webster said, “we are almost finished with all the drawings and getting everything through planning.”

The county had the site surveyed and the public works department is ready to start the site preparation, Webster said. “Then we’ll start moving and putting the buildings back together and assembling them and doing the internal build out.”

The buildings have been sitting there a while because they were acquired at an auction and had to be moved quickly, Webster said. Though the buildings were used for the Yucca Mountain project, she said, “none of them are contaminated by radiation.” The buildings will have stucco exteriors like the rest of the county structures on the Calvada Eye.

The planning department will move from the Marilyn Gallivan building at 250 N. Highway 160. The Pahrump Building and Safety Department, run by Charles Abbott and Associates, moved to that building recently, vacating leased office space on East Basin Avenue. The public works department is currently a little hidden, in the road department yard on Boothill Lane off Highway 160.

There was more space in the Marilyn Gallivan Building after the Community Health Nurse and Nye County Health and Human Services Department moved into the new 5,760-square-foot, Health and Human Services building on the Calvada Eye last year. Pac-Van was awarded a $544,850 contract to construct the health and human services building, which ended up costing $783,356 after the change orders, including a $196,083 second change order to provide water lines, a fire hydrant and shade structures with stucco columns. It also houses the Veteran’s Service Office, which formerly operated out of a trailer behind the Marilyn Gallivan Building.

“There’s a lot of money that can be saved by having everybody on one property,” Borasky said. He said if the county would’ve known about the Yucca Mountain buildings they wouldn’t have spent money on remodeling the Marilyn Gallivan Building.

“Unfortunately the timing wasn’t right. But it will save a lot of travel going back and forth from the existing planning department back and forth to our office, as well as public works,” he said.

The county hasn’t decided what to do with the Marilyn Gallivan Building, but there are discussions about offering it to the town of Pahrump. Borasky said county officials will decide what to do with that after they open the new One Stop Shop.

Webster said the One Stop Shop will enable developers to get all their county permits at one location.

“This is the government complex. We wanted to have it all together. We are going to use this as that ultimate destination, it’s still kind of choppy over there the way it’s set up. This will be more easily accessible. Our intent is to have a common cashiering capability, you can visit all three departments but you only pay once. You will be assigned a case number and visit all the entities,” Webster said.

The county’s Tyler Eden software system will have a permitting module with on-line scheduling and information showing the status of the developer’s project, she said.

The county signed a $1.4 million contract with Pac-Van Inc. in August 2009 to build the 11,000-square-foot, modular county administration building, using money from the settlement agreement for the Yucca Mountain project. It opened in June 2010. That project involved a number of other costs including $61,359 to demolish the old Calvada Eye buildings, $45,000 to Nevada Geo-Tech Inc. to provide plans for the new building, $73,855 for utility connections to the Utilities Inc. of Central Nevada system, a $74,043 contract with Valley Electric Association, $24,539 to Byrd Underground to make utility connections and a $13,495 contract with Engle Technical Services for the installation of fiber optic cable.

But before moving to the Calvada Eye, county administration had been housed in different locations, including rented office space at 401 N. Frontage Rd. and on East Basin Avenue near the courthouse.

Pac-Van received the contract for modular buildings assembled for the county treasurer, assessor and recorder. Nye County bought the buildings for $260,000 and spent about $650,000 when renovations are included. Those county officials moved into their new offices at 160 N. Floyd Dr., behind the courthouse, the Ian Deutch Justice Facility, in February 2008.

Borasky said those officials need to be closer to the clerk’s office, in the courthouse. “There will actually be two locations to do all the county business,” Borasky said.

Pac-Van is a nationwide company providing mobile offices, office trailers and other portable buildings. The trailers are sometimes used for on-site construction offices, or for special events.

Nye County was unsuccessful trying to get parks grants to build walking trails on the Calvada Eye, but Borasky said county grant writers are still pursuing them.

The new One Stop Shop still leaves considerable space on the south side of the Calvada Eye for other improvements.

The only other request for land on the Calvada Eye was for 3.27 acres for a visual and performing arts center.

The county commission approved setting the land aside in May 2007, with the stipulation it be built within five years or the property would revert back to the county. The project never materialized.