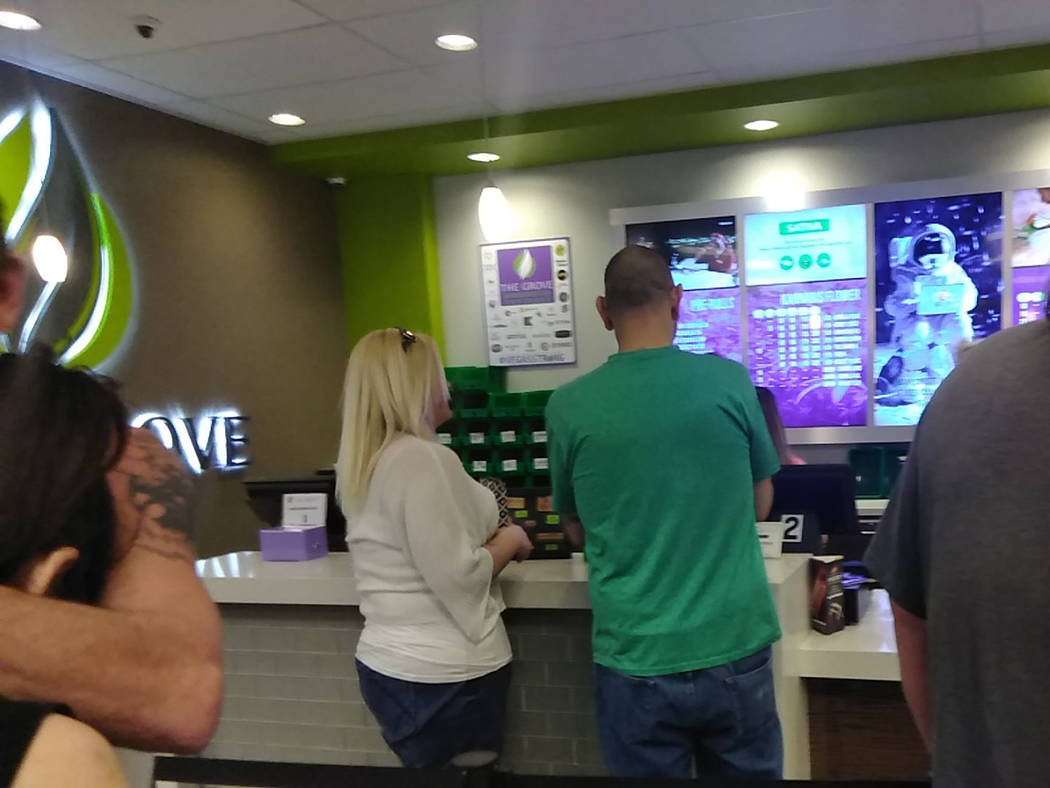 Selwyn Harris/Pahrump Valley Times There was a steady flow of customers throughout the day as officials with the Grove dispensary hosted a third anniversary, all-day celebration on Saturday March 16. The event offered attendees raffles, food, music and specials on numerous products throughout the store. 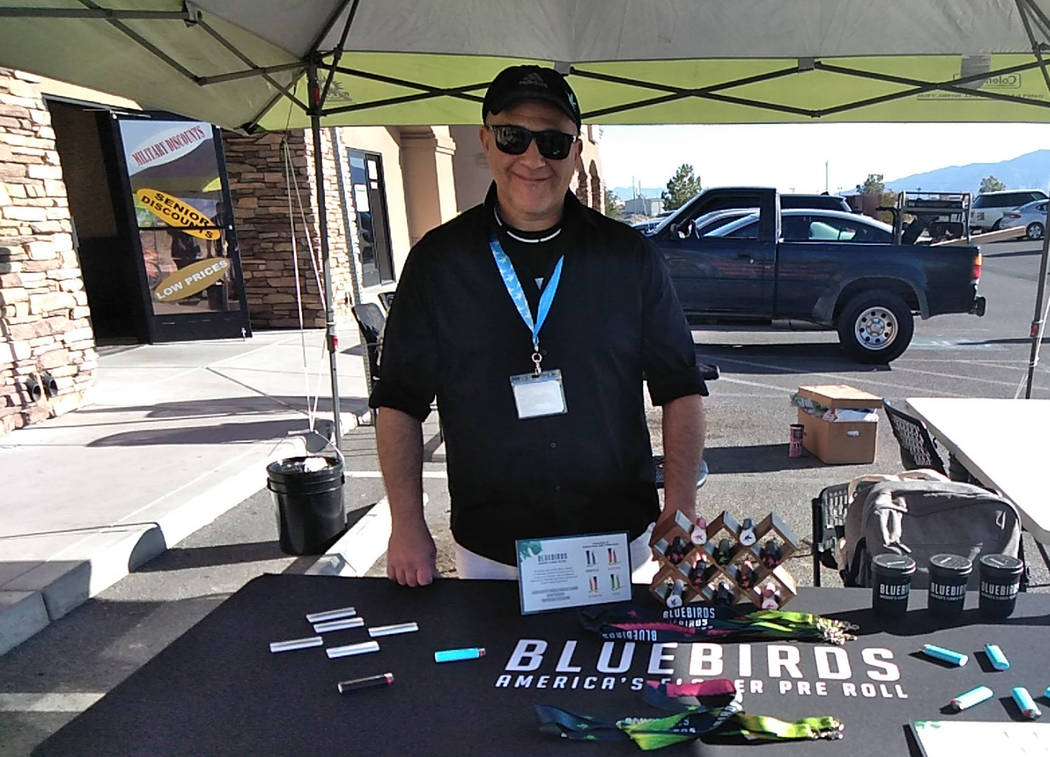 Selwyn Harris/Pahrump Valley Times Todd Lenett, a brand ambassador for Deep Roots Harvest out of Mesquite, Nv., was offering pre-rolled marijuana joints, dubbed “Bluebirds” at his booth. Lenett was one of several out of town vendors at the anniversary celebration, which drew in hundreds of customers and visitors alike.

“Everything went great today and there was a huge turnout, as always.”

Those are the words of Grove Manager Zachary Wright, who hosted the marijuana dispensary’s third-anniversary celebration on Saturday, March 16.

“All of the vendors are awesome and I really have great relationships with all of them,” he said. “Almost every vendor product that we carry in the store was here today representing themselves and their company. It’s always good to see the community out here and their smiling faces. I really enjoy meeting the customers that employ me and everyone else here at the Grove.”

Among those customers, surprisingly, or not, were area seniors, wanting to learn more about the benefits of marijuana.

“Usually, when people think about marijuana use they think about young people, but we get a lot of senior citizens here,” he said. “They are my favorite clientele, mainly because they are curious. Young customers, such as millennials and people in their late twenties and early thirties, but my senior customers, are new to this whole thing, and they are very curious. They want to learn and I like to be able to teach them about the benefits of marijuana.”

Regarding his younger customers, Wright noted that many tend to seek out alternative marijuana-infused products, rather than the traditional flowers to smoke.

“As everyone knows, the flower is from a different generation,” he said. “The older set all grew up as smokers. They all grew up with Maui Wowie, Thai Stick, and Acapulco Gold. Those are the classics. It’s a different kind of feel, and I actually love that I get to educate them on other kinds of cannabis like the edibles and the waxes, and they get to educate me on the old stuff. It’s kind of cool.”

One thing that the younger and older users of marijuana have in common is the price and quality of the product.

Wright said all are always looking for ways to save money on their purchases.

“I hear a lot of things from the community regarding lower prices and we are working on that,” he said. “We also want to make sure we don’t lack in quality at the same time. We want to bring lower-priced flower into the store, and make sure it’s up to their standards as well.”

Wright also spoke about how marijuana is slowly, but surely, becoming mainstream across the country.

He actually made a prediction about which state will likely legalize the use of recreational marijuana.

“I know it sounds crazy, but I think Idaho will come around to it,” he said. “I’ve seen crazier stuff happen. I know of people who are lobbyists in Idaho, and are pushing for that. You can also think about the state of Utah and medical marijuana. That’s a highly conservative state and I was surprised that they legalized medical marijuana.”

Though the majority of his customers are local residents, Wright said he’s had the pleasure to meet people from all around the globe at the Grove.

“Just by an estimate, I think we get about 20 new people a day, and that’s just a ball-park figure,” he said. “Many are just passing through town. We get German tourists, we get French and Italian tourists, and I’ve seen a lot of tourists from India, which is kind of neat.”

After three years of doing business in the valley, Wright said there have been a few changes for customers to expedite their respective transactions.

“We have a new online ordering system here, and it is super fast and super easy,” he said. “We have a tablet in the lobby, and all you have to do is put in your phone number. It will then shoot you a text and that text will have a link to it that will get you registered for the ordering program. It’s literally your first name and your phone number and that’s it. We process orders within at least 30 seconds after receiving them.”

Among the many vendors at the anniversary celebration was Todd Lenett, a brand ambassador for Deep Roots Harvest.

“Bluebirds are a premium pre-roll,” he said. “They’re very high-quality buds and are hand-packed, hand-finished, and probably some of the best you can find. Deep Roots started back in 2014 and based in Mesquite, Nevada. We have flower and edibles. We also have concentrates and vapes. This year, they will be opening dispensaries in Las Vegas, under Deep Roots Harvest.”

“I really want to get involved with the community, and get my footprint in this valley,” he noted. “I want people to be able to come to us as well as us coming to them to help each other out with their organization or charity. I have a great staff here. They’re ready, willing, and happy to reach out. After three years in business, it’s still at a steady incline, which is obviously good. We always hope for more, and as the population in Pahrump increases, I’m sure that will happen.”