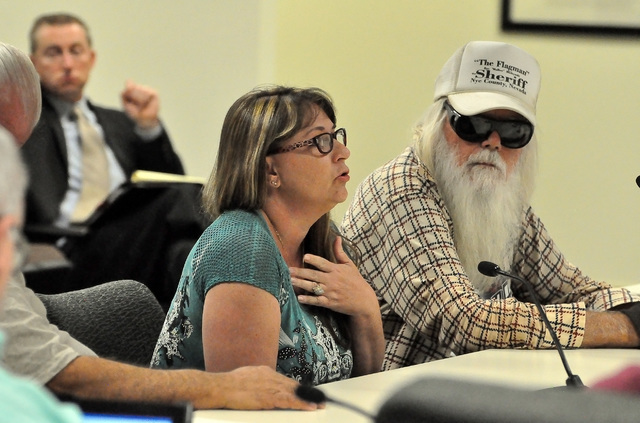 Horace Langford Jr / Pahrump Valley Times Kayla Mitchell and Ray "the Flagman" Mielzynski speak at the Pahrump Regional Planning Commission meeting on Wednesday, July 13. The commission gave Mitchell 60 days to comply with the remaining conditions of the conditional use permit.

The owners of the nonprofit Big Cat Encounters have 60 days to comply with the remaining conditions of a conditional use permit after an animal rights group asked town planners to revoke the permit for violations.

In a 4-2 vote, members of the Pahrump Regional Planning Commission continued a two-year use permit at the meeting Wednesday. They told owners Kayla and Karl Mitchell, who own 10 tigers, that the animals should not be allowed out of their caged facility when friends and family come over.

In question are three of the 18 special conditions approved in November as part of the use permit. They include submission of a notarized statement acknowledging that the CUP will be revoked immediately if there is any exhibition of the animals on the property, making a bladed road passable by 2-wheel-drive sedan or emergency vehicles for BLM right of way and Woodchips Road to the property and not exhibiting the animals on the premises.

An appeal of the granting of the CUP was later filed by the Animal Legal Defense Fund (ALDF), People for the Ethical Treatment of Animals (PETA), Lions, Tigers &Bears Sanctuary, Keepers of the Wild Sanctuary, and Big Cat Rescue Sanctuary.

In January, Nye County commissioners upheld the RPCs decision to approve the CUP. However on June 7, the Animal Legal Defense Fund submitted information alleging that illegal exhibition had occurred at the property and requested a revocation hearing to determine compliance with the CUP.

It is clear from numerous public reviews on the Big Cat Encounters Facebook page that the facility is defying not only the BoCC, but the license revocation of the U.S. Department of Agriculture by continuing to thumb its nose at the laws meant to keep your community safe, Nasser said in a letter.

A review by Alicia Cook that dates to May 17 reads, The habitat area was clean and well taken care of; you can see where they are planning on expanding to give the animals more room to play. The responses from the tigers was amazing; you can see the love these animals have for them!

Kayla Mitchell said that she doesnt exhibit tigers and that Cook is her friend.

I am allowed my personal friends and family to my home to see my animals, she said.

I promised you guys back in November, and Im a man of my word, theres no exhibiting, he said.

Karl Mitchell said that out of 39 people who left reviews on the Big Cat Encounters Facebook page, 38 have never been to their property. In a packet provided to the commission, Mitchell included his correspondence with several people where he stated that his entity is private and doesnt accept requests for private visits.

He also argued that posting a picture or doing a review on Facebook doesnt constitute or meet the criteria for exhibiting.

According to one of the conditions of the CUP, the sanctuary shall not be open to the public and no exhibiting of the animals shall be allowed to occur on the premises.

Chair of the commission Gregory Hafen II said that the definition of open to the public is one of the sticking points.

Kayla and Karl Mitchell will have 60 days to submit a notarized statement acknowledging that the CUP will be revoked immediately if there is any exhibition of the animals on the property and make a bladed road passable by 2-wheel-drive sedan or emergency vehicles for BLM right of way and Woodchips Road to the property.