There are nearly four times more inmates who have tested positive in the federal detention center run by CoreCivic than positive tests from all state prisoners -- by far the highest numbers of any detention center in Nevada. (Elizabeth Brumley/Las Vegas Review-Journal)
By Katelyn Newberg Special to the Pahrump Valley Times
October 29, 2020 - 5:40 pm 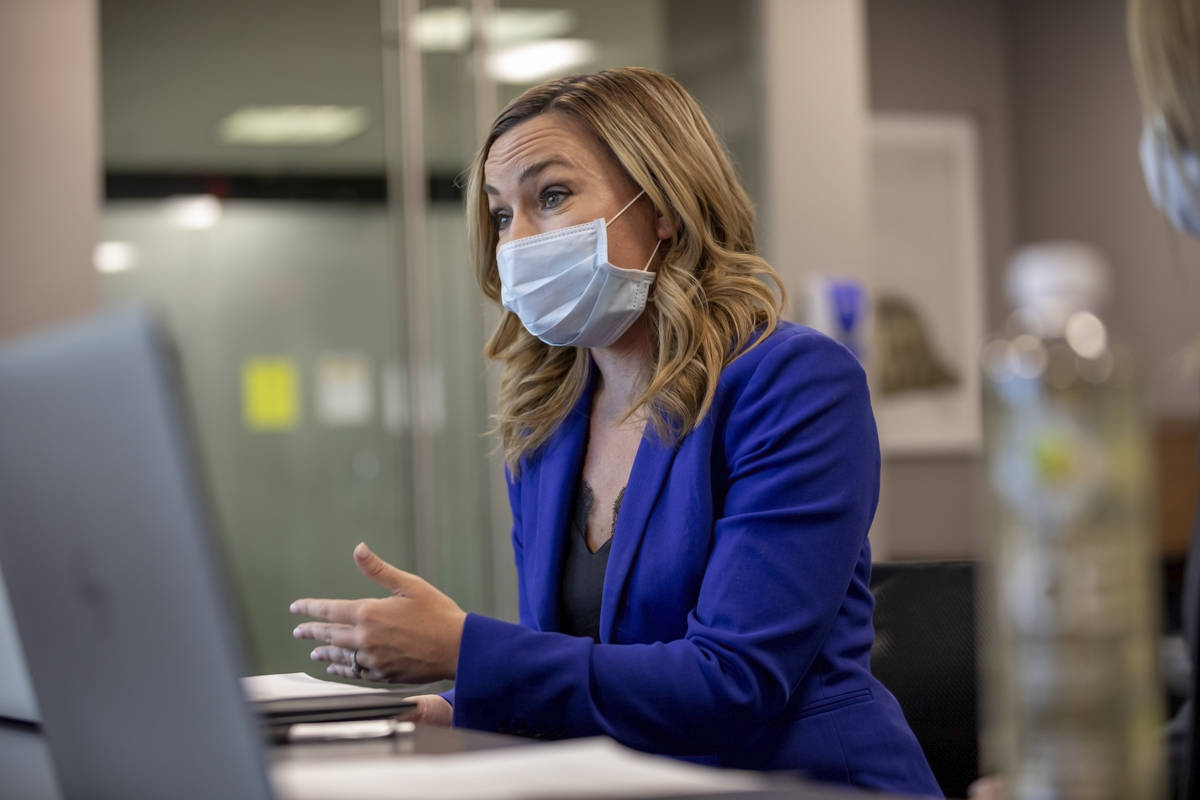 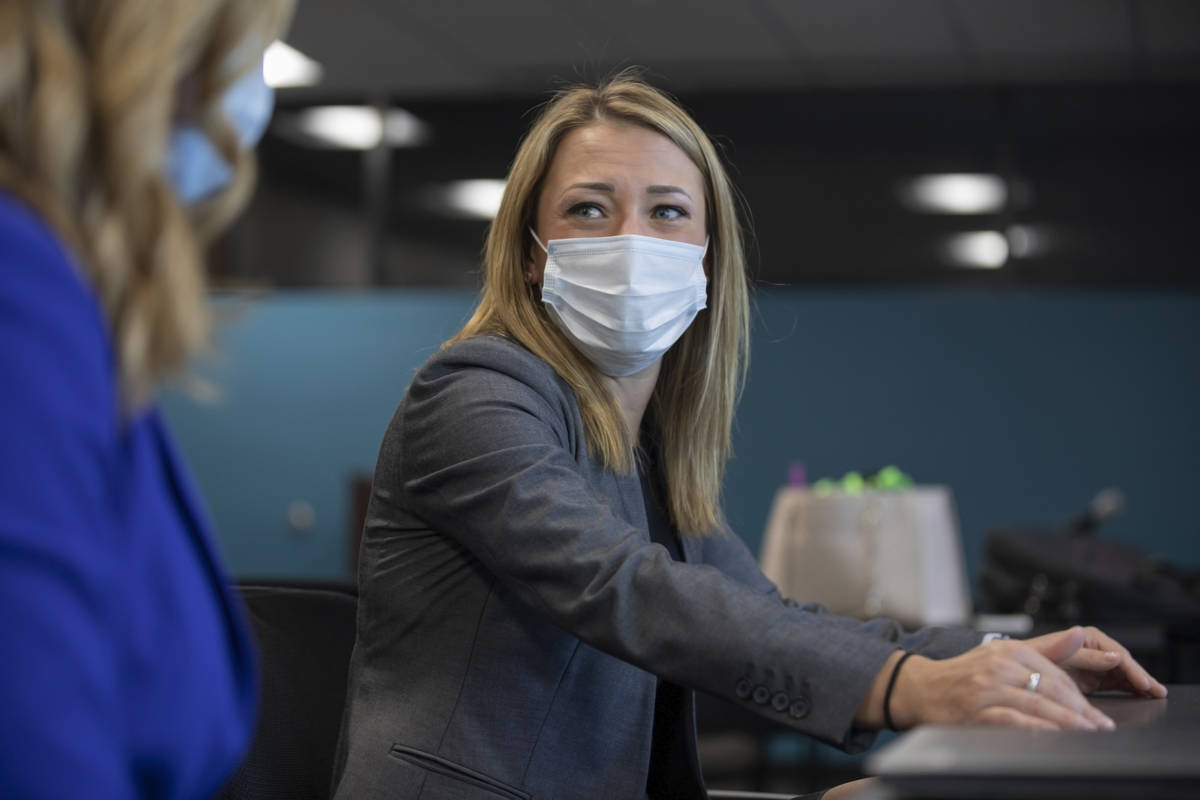 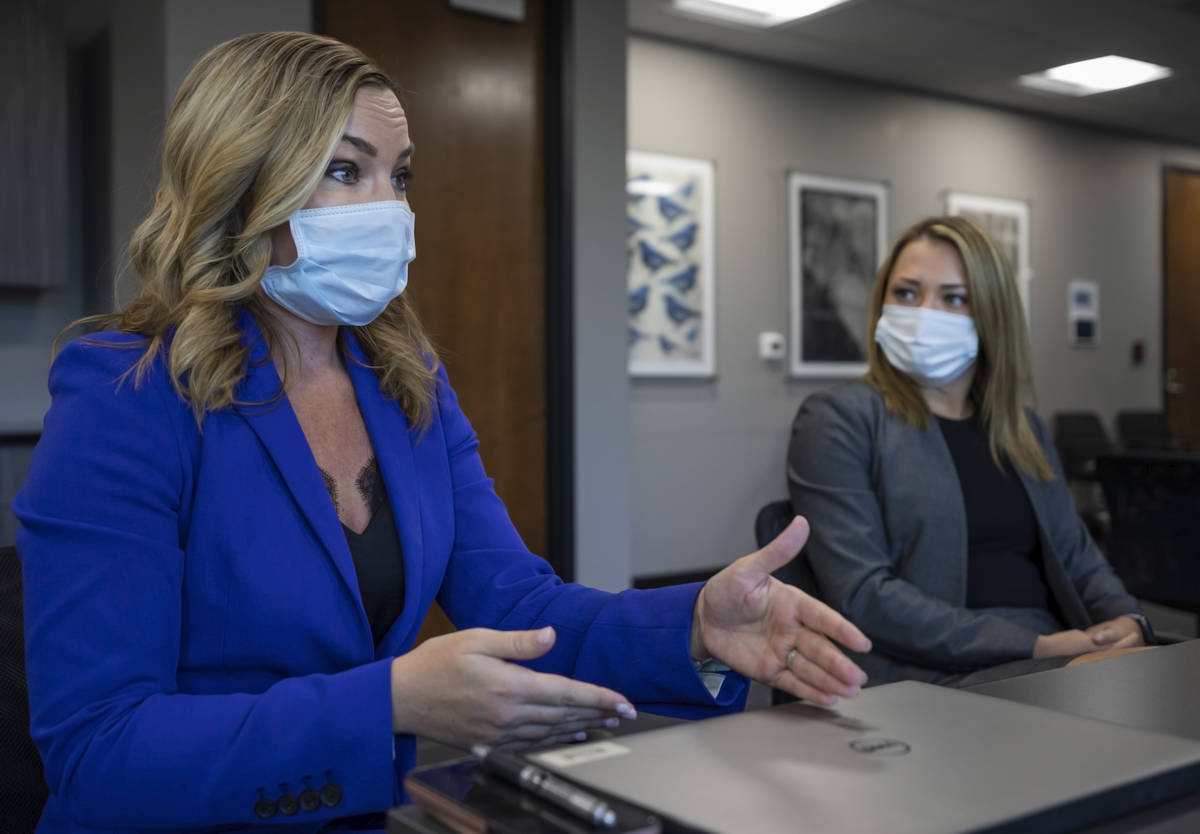 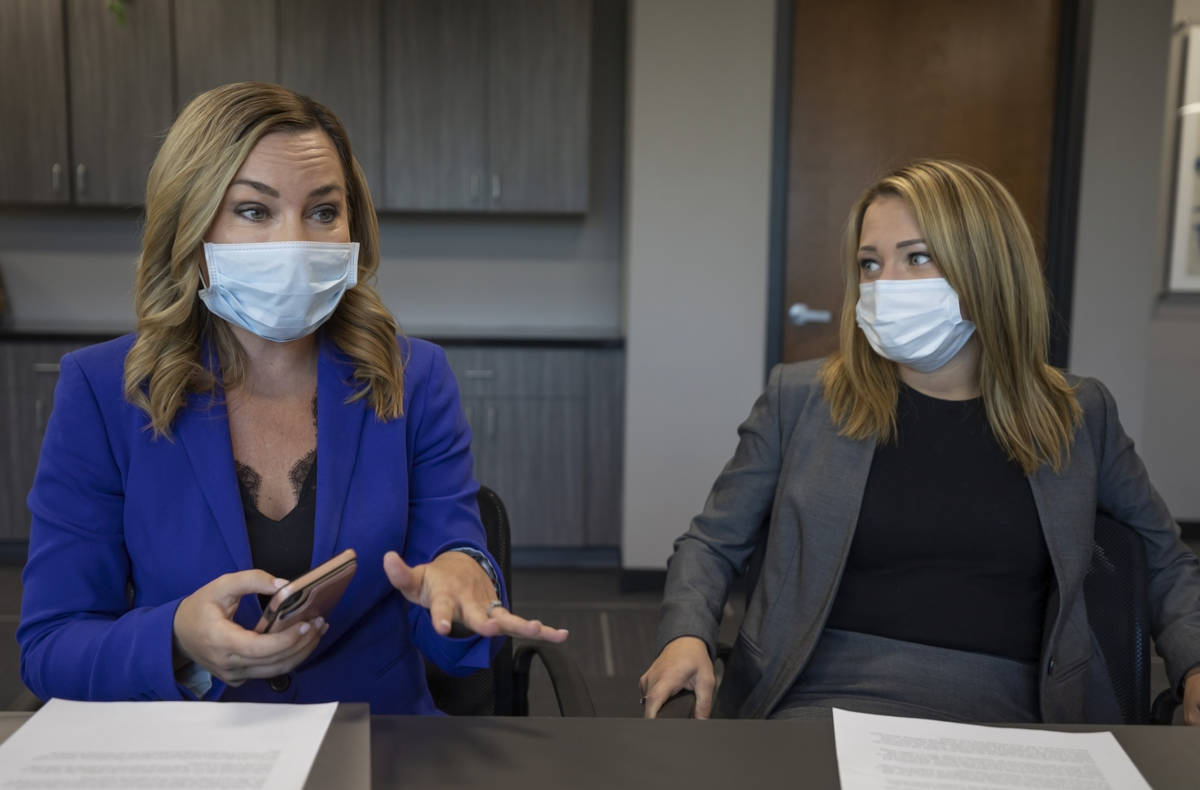 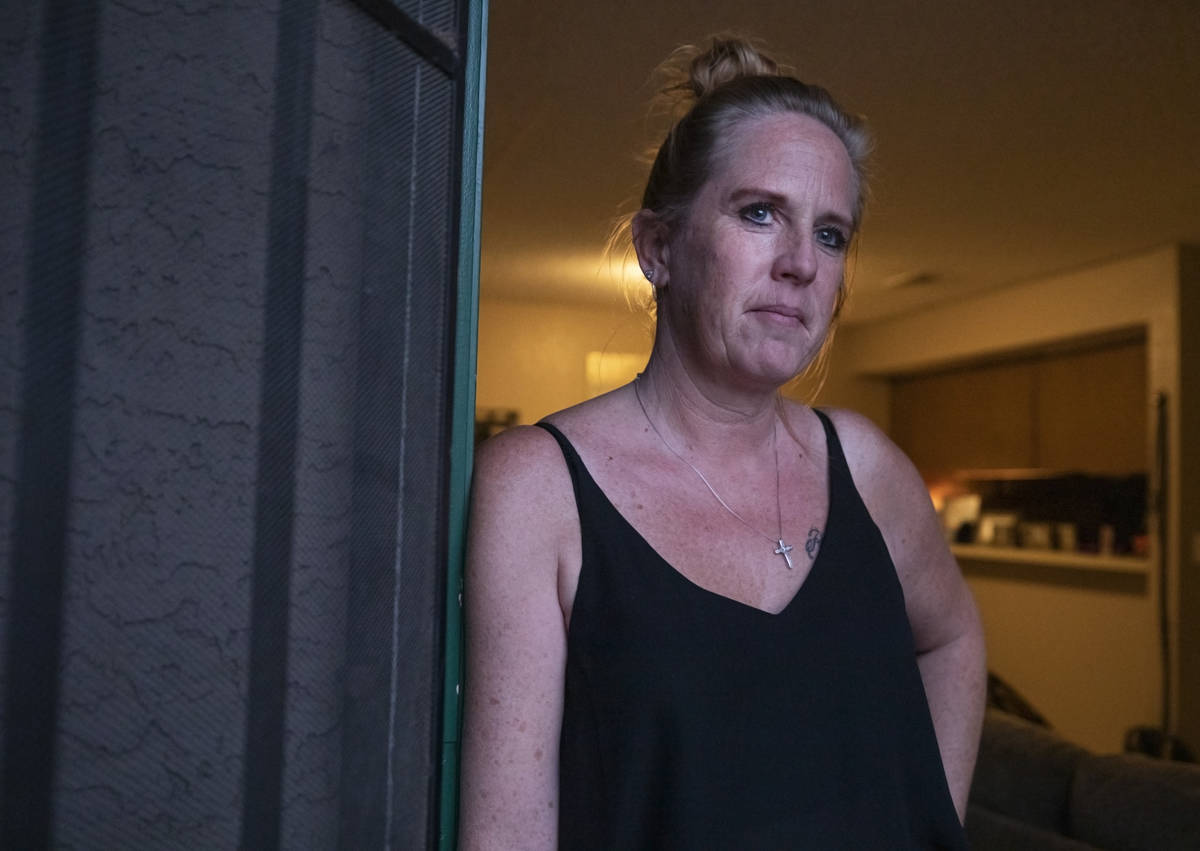 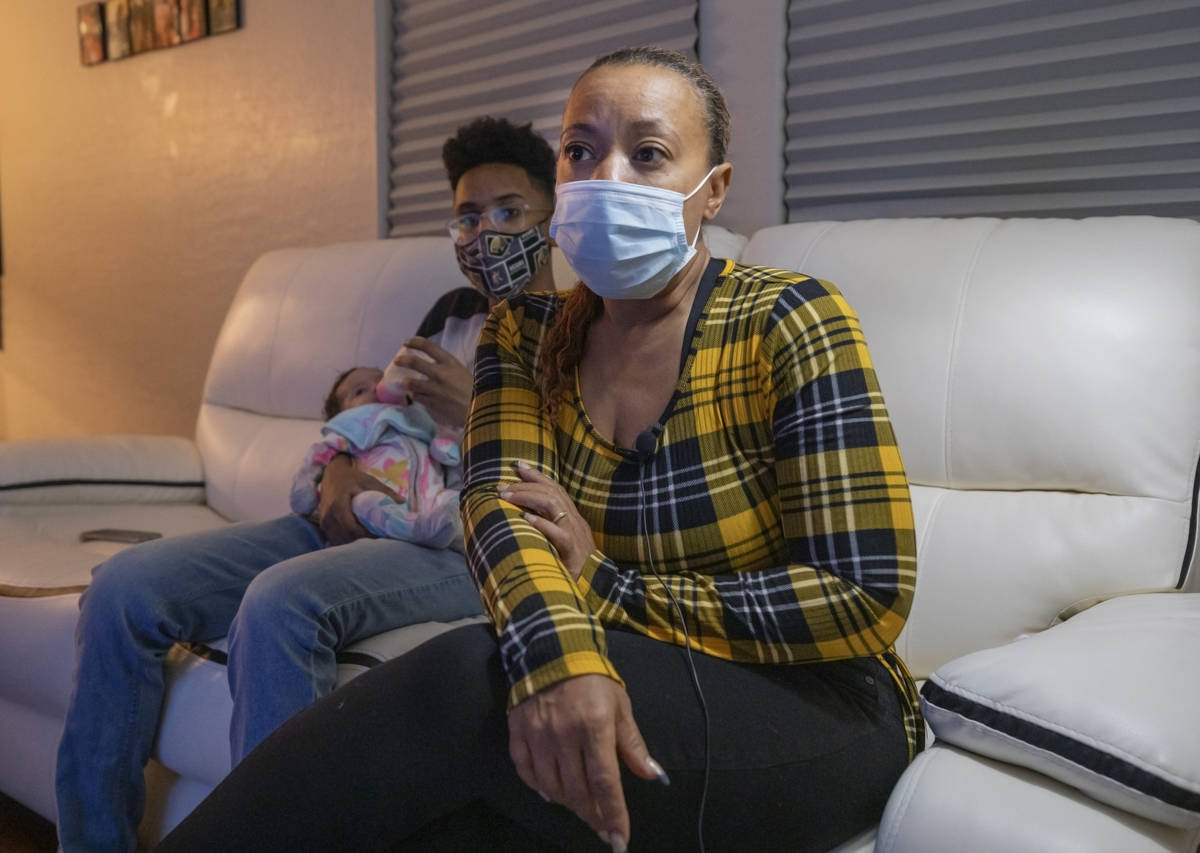 Daniva Chandler is seen with her son Tavaras Jr., 14, and her granddaughter Zoie Chandler, in their home on Wednesday, Oct. 21, 2020, in Las Vegas. (Elizabeth Brumley/Las Vegas Review-Journal @EliPagePhoto) 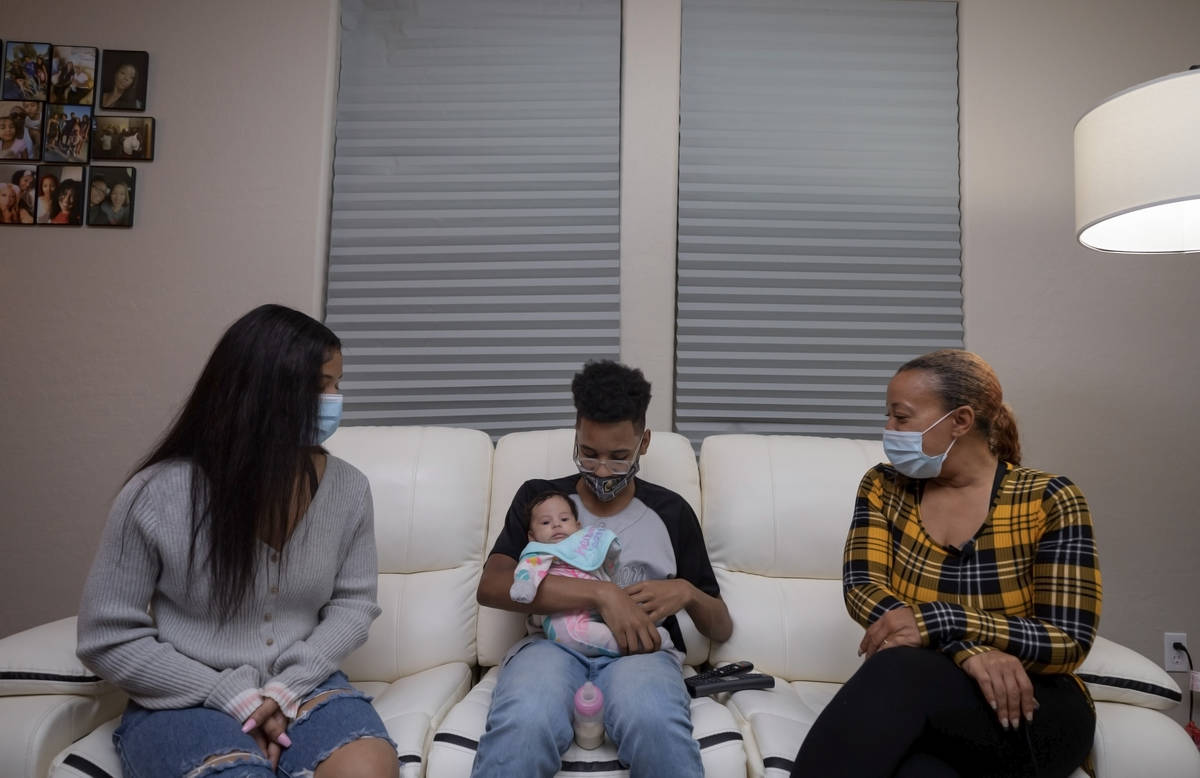 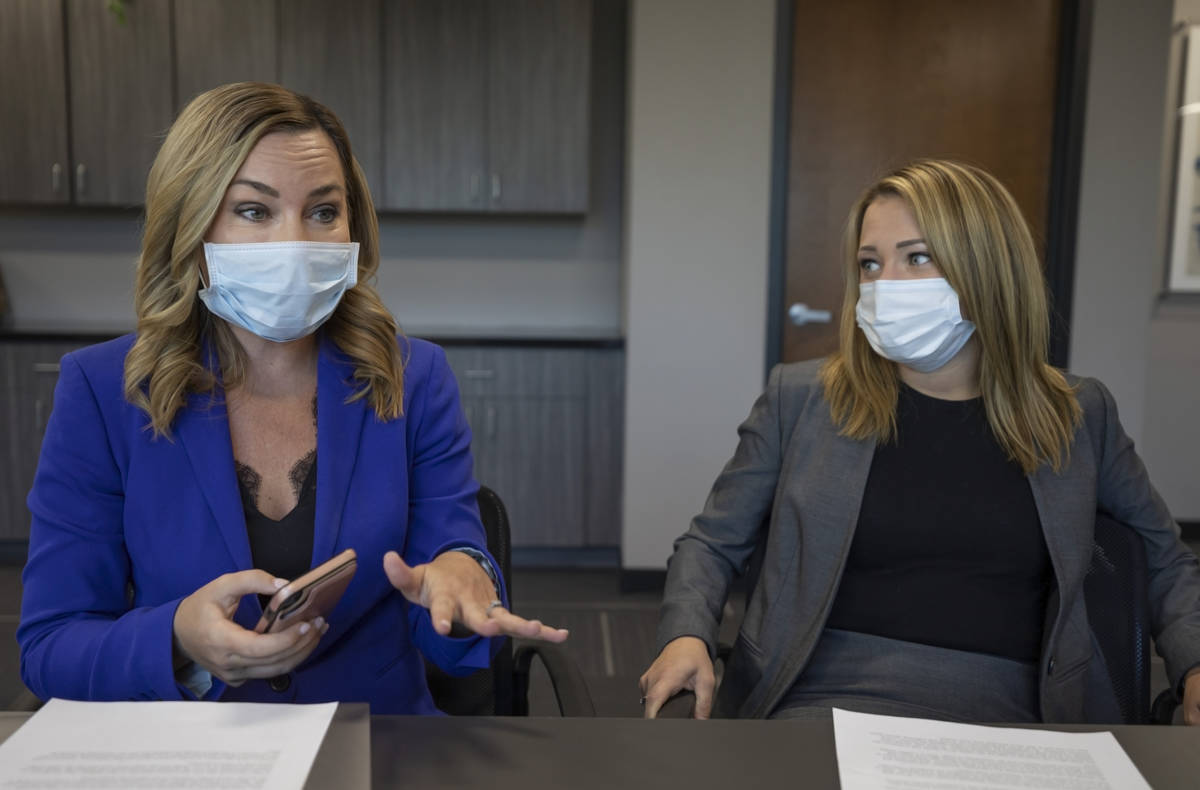 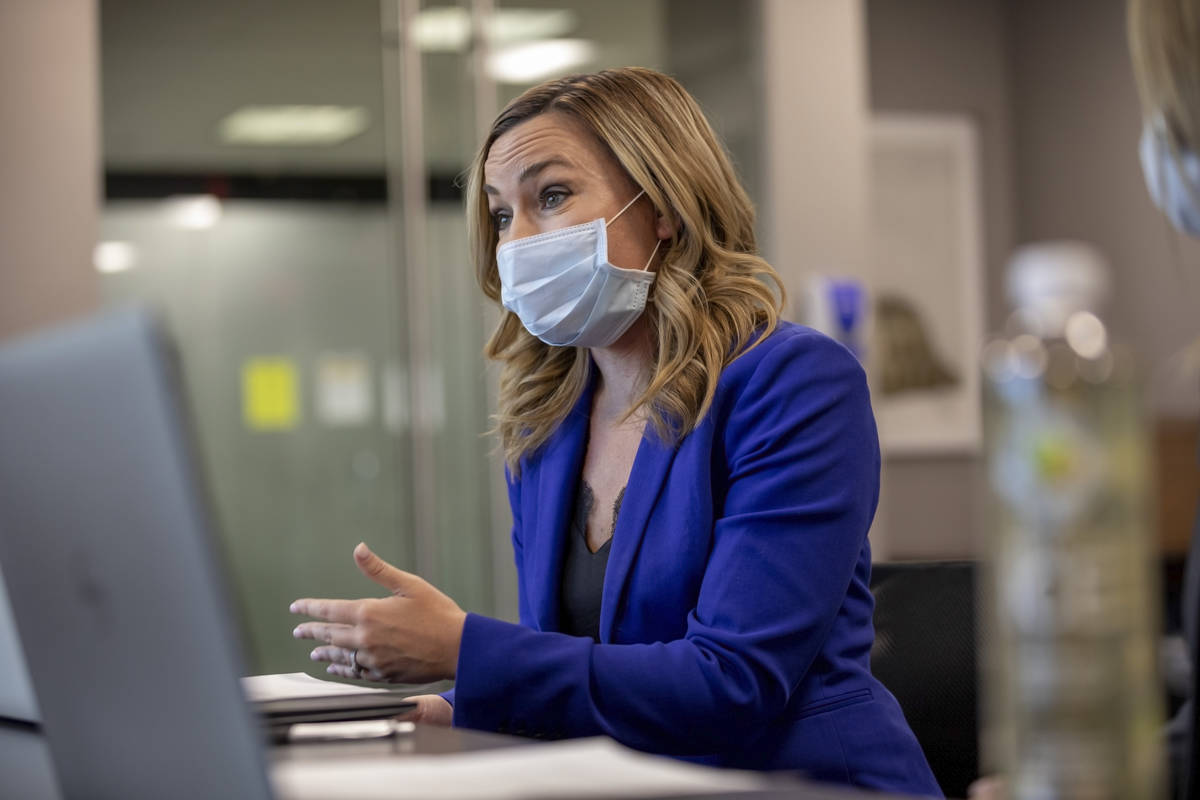 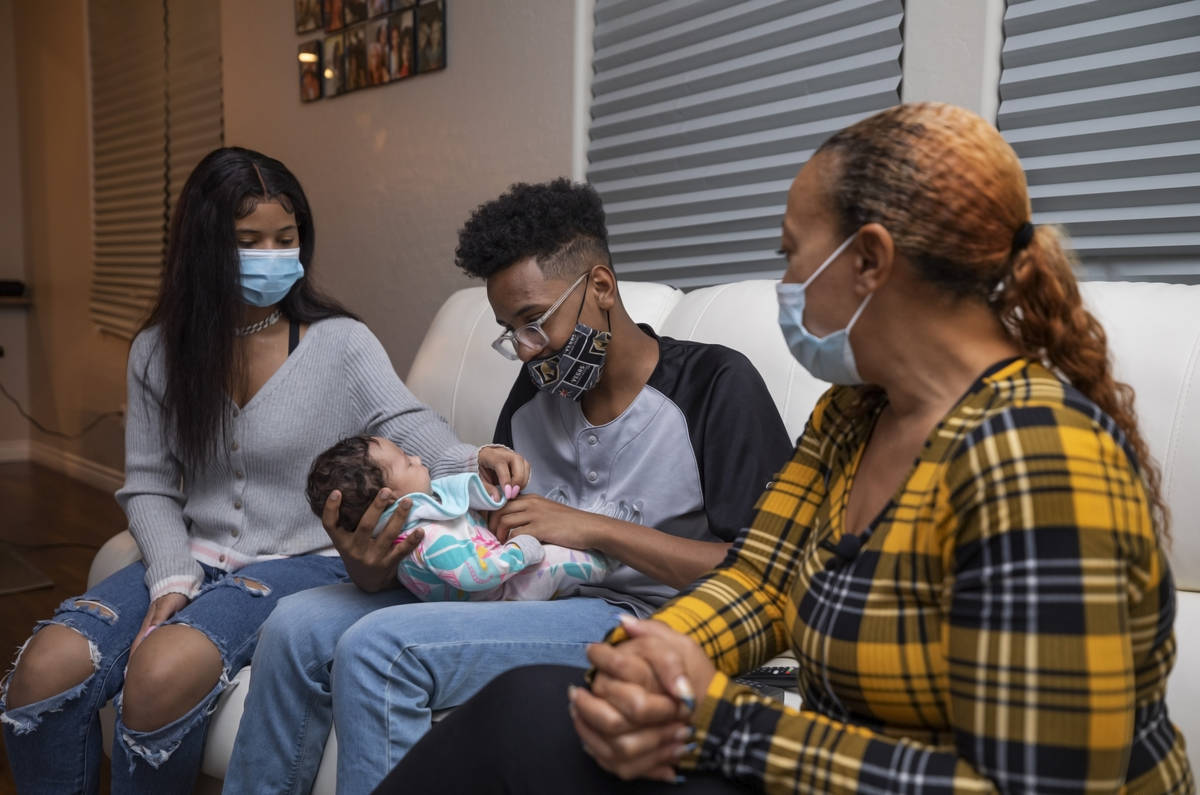 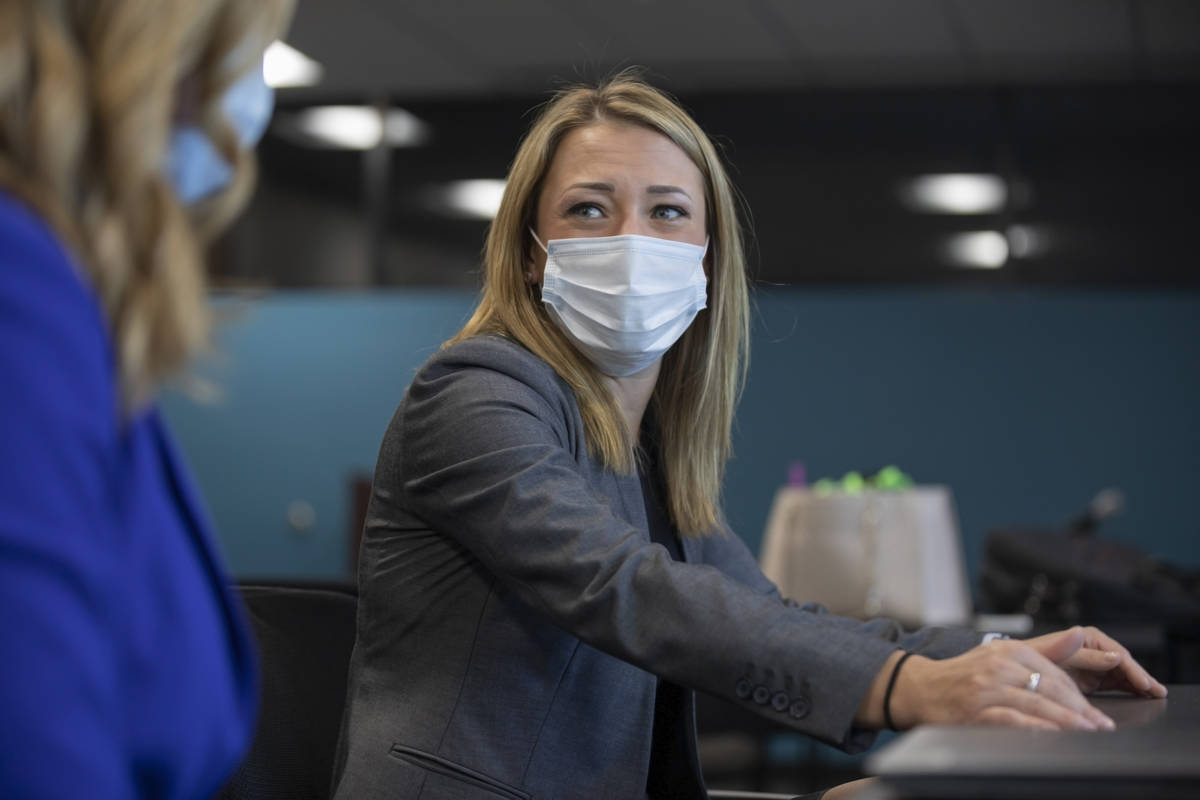 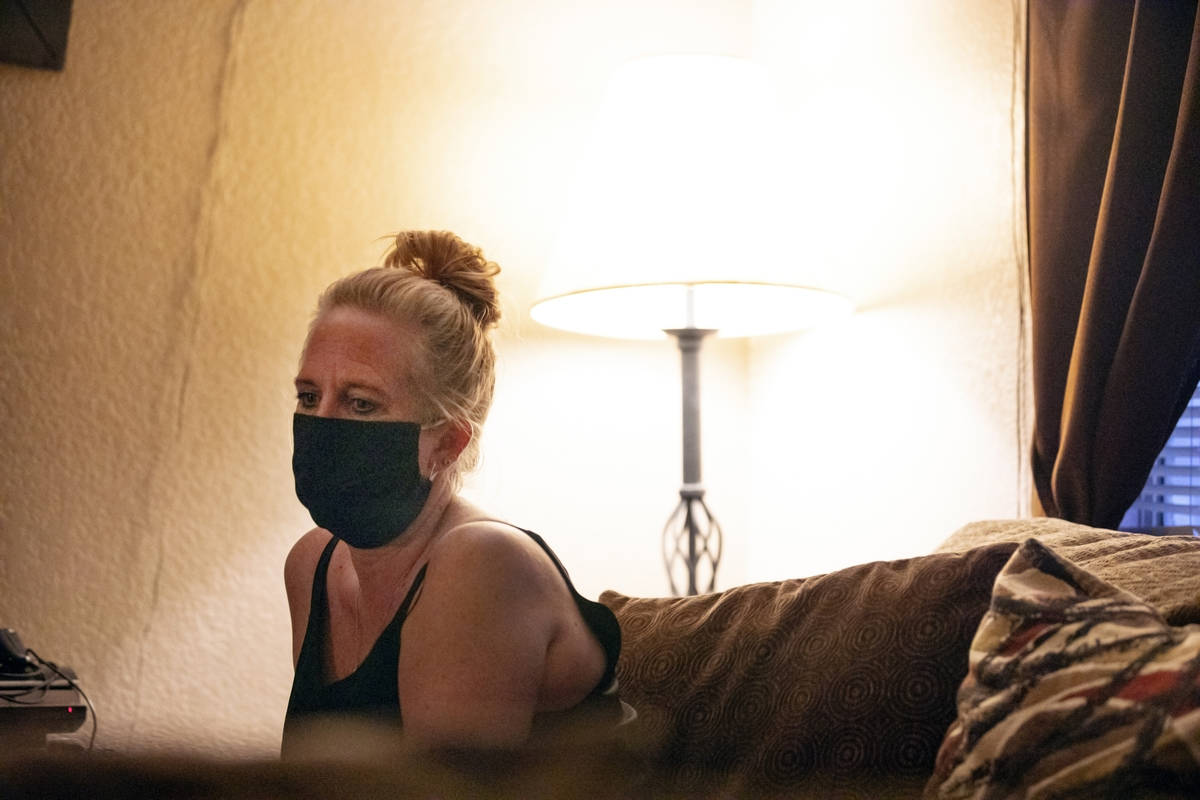 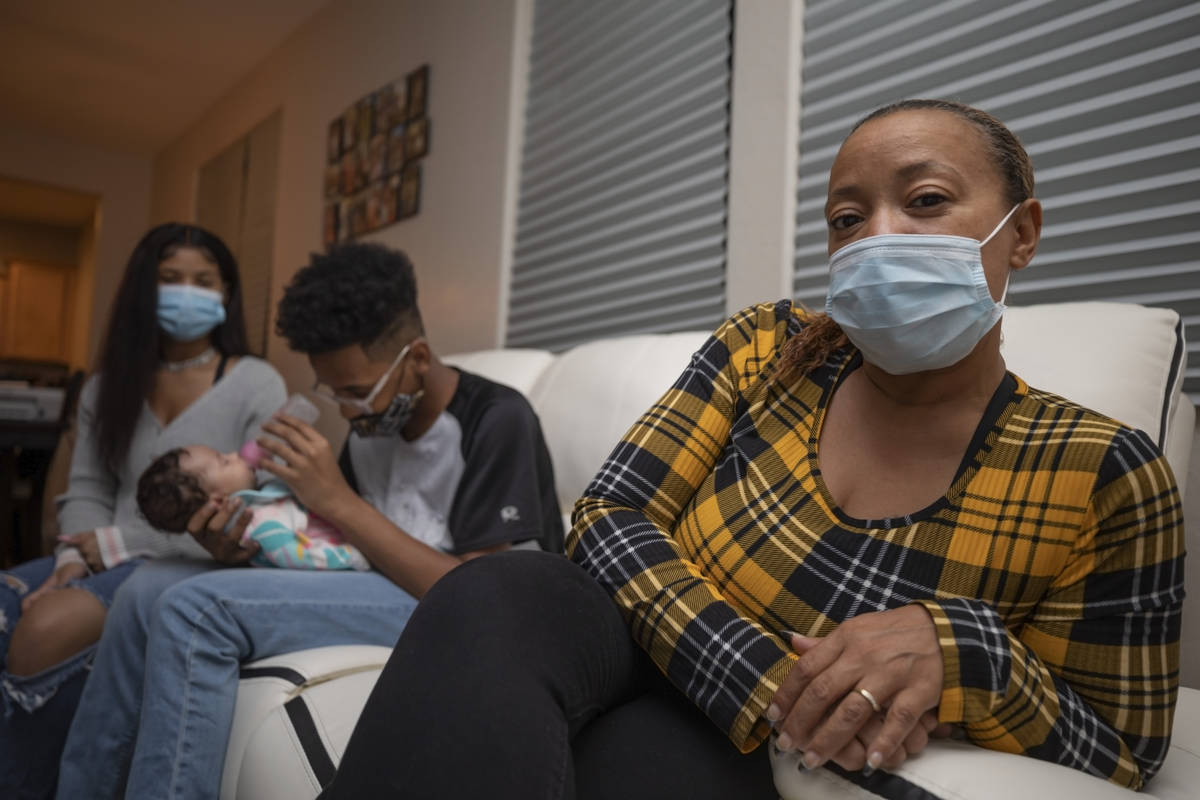 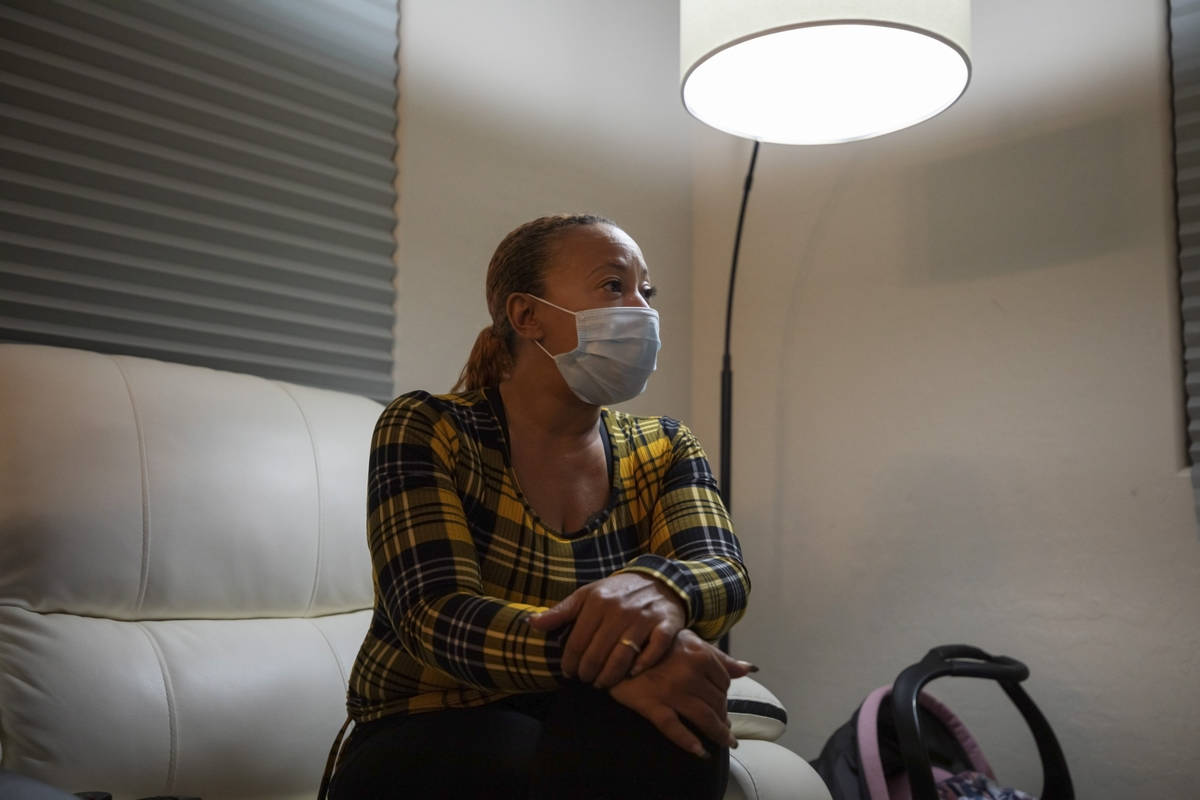 Throughout the coronavirus pandemic, inmates and attorneys have been trying to sound the alarm at Pahrump’s privately owned Nevada Southern Detention Center.

Now, seven months after the virus came to Nevada, an inmate and a detention officer are dead. Among inmates at the federal detention center run by CoreCivic, the number of positive tests is nearly four times more than that for all state prisoners and is by far the highest number of any detention center in Nevada.

“It’s been a time bomb that our office has been waiting to go off since March,” said Maggie Lambrose, one of two assistant federal public defenders who spoke with the Las Vegas Review-Journal on Friday about conditions inside the detention center.

Most of the inmates are in the custody of U.S. Immigration and Customs Enforcement or the U.S. Marshals Service. As of Friday, at least 102 had tested positive throughout the pandemic, according to statements from the agencies.

The facility has about 500 inmates, ICE and the Marshals Service said last week. The Nevada Department of Corrections, with nearly 2½ times more people in custody, has had only 27 inmate cases, according to the state Department of Health and Human Services.

Almost all the inmates at the Pahrump facility are awaiting trial or sentencing. Lambrose and Assistant Federal Public Defender Erin Gettel said their office has succeeded in only a handful of requests for compassionate release of sentenced inmates over health concerns.

Brandon Patton, a 29-year-old who was awaiting sentencing for drug and probation violation charges, died Oct. 8 after two motions in his case were denied.

‘Getting ready to explode’

In phone conversations and affidavits, one of which was signed by 56 detainees, inmates described living conditions that have created a “hotbed for the disease,” Lambrose said.

Inmates said the facility tests only those with a fever of at least 100.4. The Marshals Service said in a court hearing Oct. 20 that it will begin testing new arrivals, but there has been no widespread testing of every inmate at the facility.

Cleaning is irregular, social distancing is impossible, and guards walk from virus-free units to those on quarantine, inmates said.

When the detention center isolates new arrivals or those with a positive test, it sends them to a solitary cell and lets them out for 30 minutes three times a week, according to court documents.

In a statement sent Friday, CoreCivic spokesman Ryan Gustin disputed that the “hole,” as inmates call it, should be considered solitary confinement but did confirm that the facility uses “separate housing units … when someone is confirmed positive.”

The Centers for Disease Control and Prevention recommends that detention centers create medical isolation “distinct” from solitary confinement to avoid concealment of symptoms by inmates out of fear that they will be sent somewhere normally used for punishment.

Last week, inmates told the Review-Journal that people with positive results were not being removed from dormitories, which house about 90 people each. Gettel and Lambrose said they have heard similar reports from their clients.

Umoren, who tested positive in August and has recovered, said there’s increasing tension between the men in his unit, especially after they were told that eight inmates with positive results would not be isolated. He counted a dozen others showing symptoms last Wednesday.

Mary Barbee, 68, said last week that her two sons, both with chronic asthma, had tested positive in the Pahrump facility. One of them, 48-year-old Melvin Dillon, was being kept in Umoren’s unit after his test came back, she said.

Barbee, from Oregon, created a letter-writing campaign advocating for her sons’ release while they await trial. But no one answered, and her worst fears have come true.

In Friday’s statement, Gustin did not address questions regarding reports of CoreCivic’s failure to isolate positive detainees. He also declined to grant an interview with the warden.

“Like others, we are relying upon the expert guidance of the CDC and other health authorities as well as that of our government partners to combat this unprecedented health crisis,” he said.

After his first motion to reconsider his detention status because of underlying conditions was denied, Patton wrote letters to his family. He feared getting sick and dying before seeing them again, his public defender wrote in court documents.

Patton died six weeks after U.S. Magistrate Judge Andrew Gordon denied his second motion over the summer. He died intubated in a hospital room, “gasping for air,” thousands of miles from his family, according to court filings.

“Brandon had accepted responsibility for his crimes, but the detention center failed to accept responsibility for his health, and as a result he died,” Patton’s family said in a statement sent to the Review-Journal. “We are devastated by the untimely and unnecessary death of our father, son, brother and friend.”

When his first motion was dismissed, Gordon acknowledged that Patton was at risk for the deadly virus.

“I hope he is doing the best he can to maintain his avoidance of getting exposure to it, but you know, unfortunately that’s the risk of crimes, committing crimes and putting yourself in a position that he’s in right now,” he said, according to a transcript of the hearing.

Three people in Daniva Chandler’s family had died of the coronavirus when her husband, Tavaras, was arrested in August and taken to Pahrump.

“That’s my lifelong partner. That’s the only person I’m going to have. I don’t want to lose him to something that could have been prevented,” Daniva Chandler said last week.

Talking through his wife’s phone, Tavaras Chandler said he worries about what would happen to his family if he were to get sick and die, especially because his wife is a stay-at-home mom struggling to care for four of her children and a 2-month-old granddaughter.

And he said he is always worried that a stray cough will turn into something worse.

“We just want people to help us,” he said. “You don’t necessarily have to let me out, but let the ones that they can let out, because people are in here stressing. People are scared.”

Roosevelt Jones said CoreCivic should at least improve social distancing inside the facility, where he’s been since August. Jones said he listens to people cough at night, while they are denied a test during the day.

“You come in here, you don’t get tested,” said Jones, who, like Tavaras Chandler, was arrested on a probation violation and has not been convicted.

While ICE ordered widespread testing of its detainees in September, the Marshals Service said Friday that individual facilities are responsible for inmates’ medical care, along with “quarantine decisions or policy adjustments.”

“When it comes to ‘widespread testing’ at any of our facilities, including NSDC, we follow the direction of the local and state health departments as well as our government partners,” Gustin said.

Jones is one of many inmates who wrote letters and petitions to judges. Gettel said Friday that she’s never seen a more “concerted action” from inmates.

But filing formal complaints feels like a waste of time, Jones said.