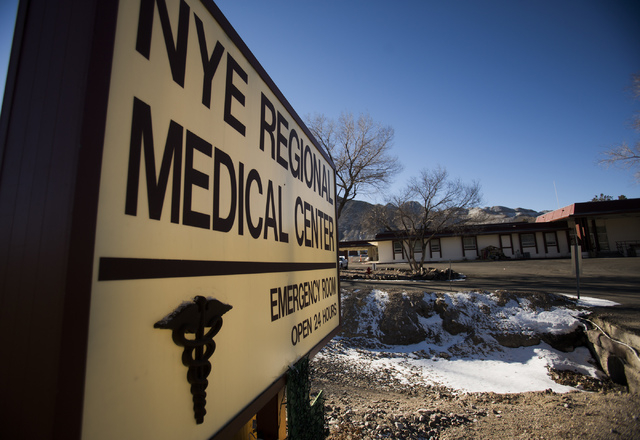 While discussing the creation of a Northern Nye County Hospital District on April 7, the Board of County Commissioners heard a dim reality revealed about the Tonopah hospital.

Tonopah Town Manager James Eason said the facility is in need of more funding as it struggles to make payroll. Town Board member Horace Carlyle said the financial crisis for the hospital is as bad as it was in 2013.

“We virtued back to bankruptcy and you’re (board of county commissioners) toast, because I couldn’t even compile the liability on the settlement agreement,” Carlyle said.

The settlement agreement Carlyle is talking about is the creation of a hospital district, along with a new 20-year lease in December with Prime Care Nevada, the corporate entity the hospital operates under, to help the hospital become financially stable.

Carlyle went on to mention that the reason he was so adamant to bring up the topic now is to make sure that the issue is not slept on and appropriate actions are taken to resolve the issue.

“You have debt in this, probably in excess of $1 million, how we deal with it as of today, I don’t know,” he said. “I’m just bringing it forward so we don’t feel comfortable about sitting back and meditating on this.”

The 12-bed facility is the only hospital in a 100-mile radius of Tonopah.

The county backed a $250,000 loan during the bankruptcy, and took the steps in court to recover the hospital’s property and equipment, which had been transferred to a previous administrator’s various entities.

County Manager Pam Webster said that there was no more money left in the health fund and she would have to look elsewhere to see if money was available to further aid Nye Regional.

Carlyle expressed concern the hospital could be sent back into bankruptcy court if the provisions of the court agreement can not be met.

“So therefore, on public record, I want this clear, you have a crisis,” Carlyle said.

“We may have to go back to the bankruptcy court and say, ‘Give us a little more time, we’re working on this,’” Wichman said. “But we can’t do a thing about what happened yesterday, or prior. We can’t change that.”

Wichman explained the county is taking the necessary steps to work toward eradicating the monetary issues of the hospital.

“We’re doing everything we can at this moment, to rectify it now and for the future,” Wichman said.

Eason asked if hospital staff could work with the county to obtain funding from the U.S. Department of Agriculture’s Rural Development programs which support rural hospitals.

The board unanimously approved to go forward with putting together a hospital district, and Wichman suggested to make Amargosa Valley and Beatty exempt from the district.

A hospital district is a taxing entity that funds specialty and/or hospital care to those people residing within the area of the approved district. Northern Nye had a hospital district from 1984 until 1999, where it was dissolved citing a severe financial emergency.

It was not clear from the meeting or supporting documents how much funding such a district would raise, especially if Amargosa Valley and Beatty are removed from the district.

Nye Regional Chief Executive Officer Wayne Allen could not be reached for comment by press time.