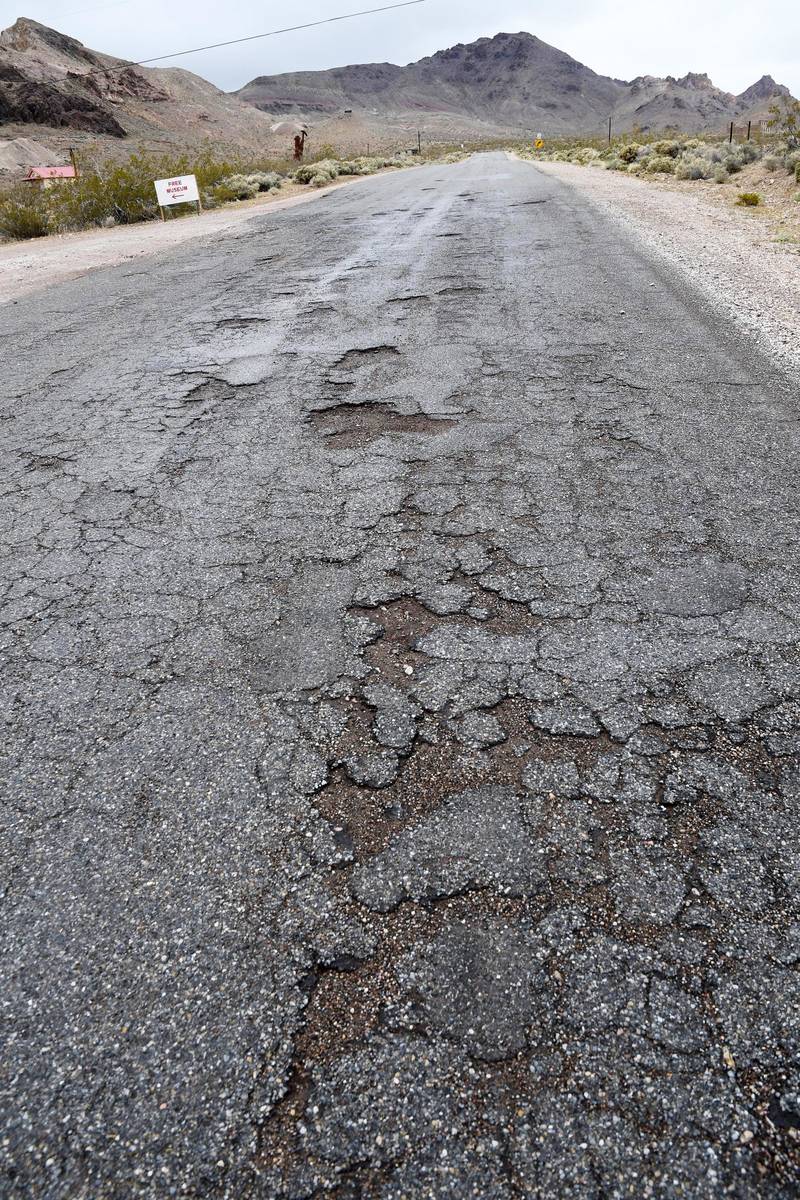 Richard Stephens/Special to the Pahrump Valley Times Potholes are present all along Rhyolite Road in April 2020. Visitors to the area have to maneuver through them on the way to the ghost town. 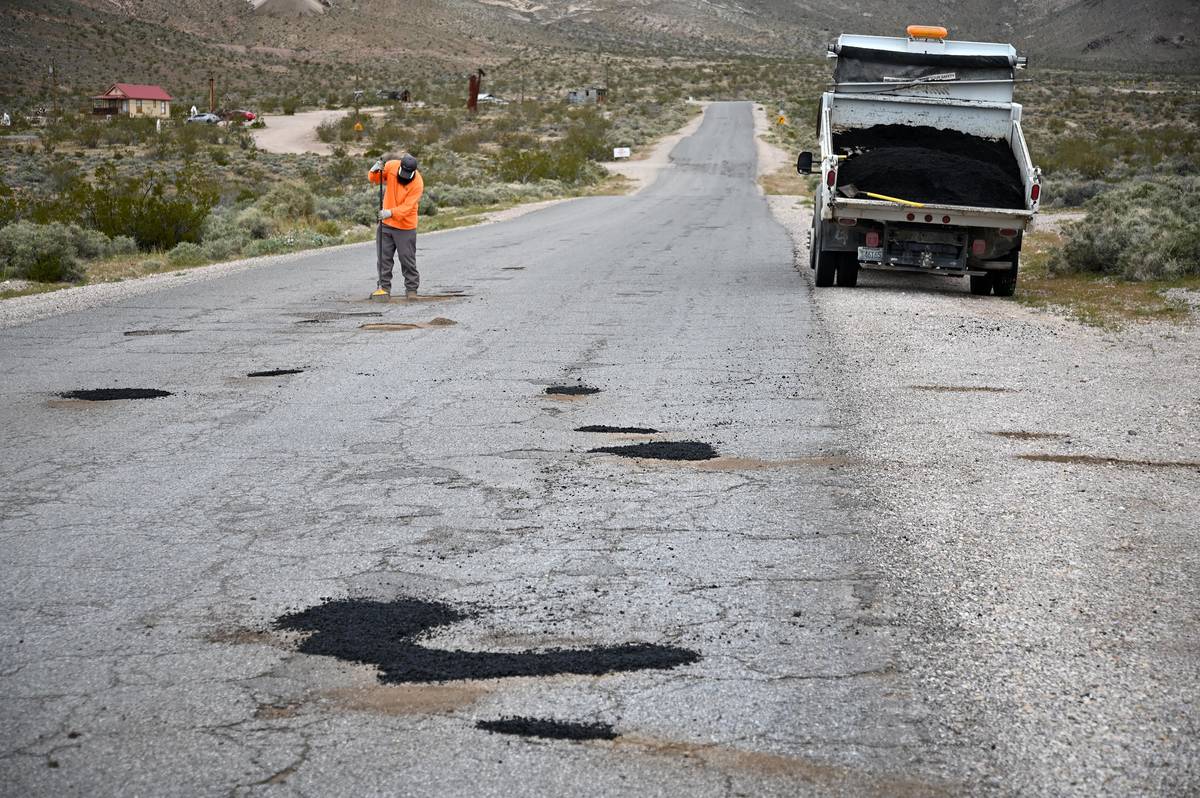 Richard Stephens/Special to the Pahrump Valley Times A road construction crewman works to patch potholes in Rhyolite on April 16, 2020. The problem is a constant situation. 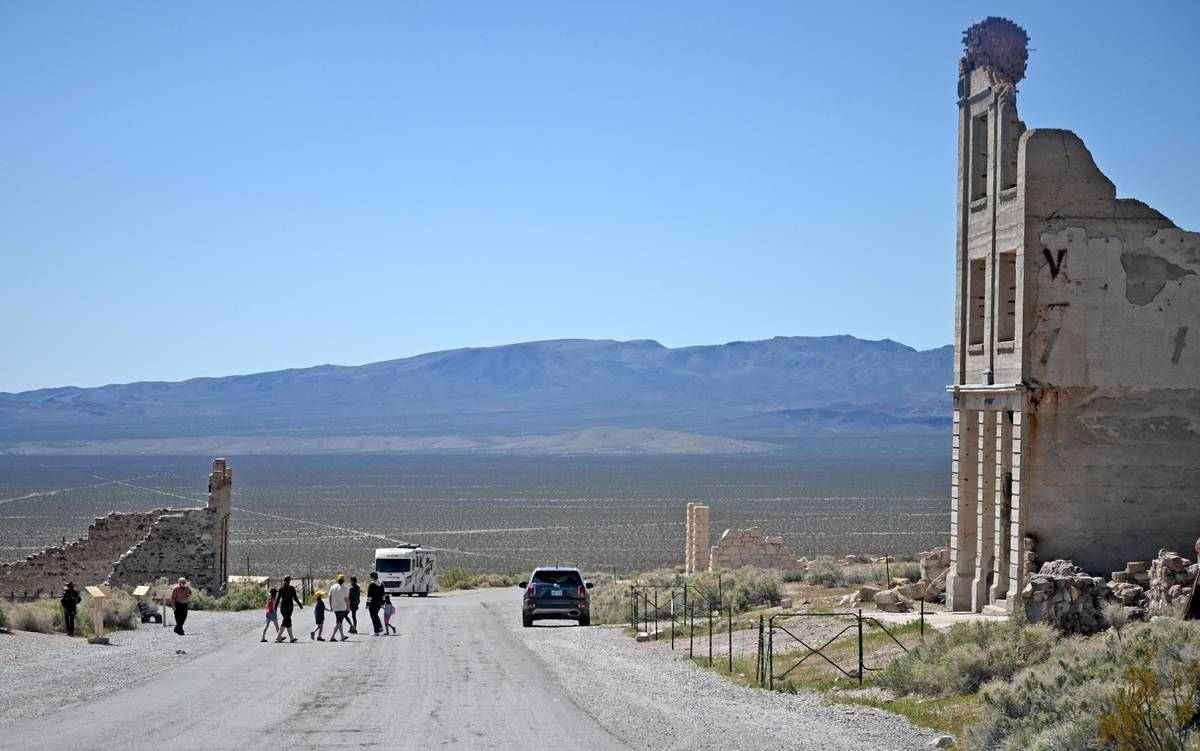 Richard Stephens/Special to the Pahrump Valley Times People, mostly from out of state head to Rhyolite during Nevada's lockdown, probably since it so close to Death Valley, which is closed.

Tourists visiting Rhyolite Ghost Town have often had to drive a slalom course to avoid the potholes that plague the aging asphalt in the access road.

Tim Dahl, Nye County Director of Public Works says that, because of the road’s classification, and because it is on Bureau of Land Management land, the county only does enough maintenance to keep the road from being a hazard for EMS responders.

Dahl explained that they don’t want an ambulance or fire crew to have a problem responding to an incident with a tourist or resident in the ghost town.

“I haven’t heard of there being any interest in improving it,” said Dahl. “In the past, we’ve done cold patch on the potholes.”

The next day, after learning of the condition of the road, Dahl had a crew at Rhyolite filling poholes. It is a never-ending task, as new potholes keep developing, and some that have been patched open up again.

The county sees the BLM as having the main responsibility for the road, and, according to Rhyolite caretaker Karl Olson, the BLM in turn, sees it as a county road.

“At one time the BLM considered putting in a gate and a pay station,” said Olson, “but they said they couldn’t because it was a county road. I’m glad they didn’t. It wasn’t practical anyway because there are so many roads into here.”

According to official count, the ghost town averages 25 to 30 thousand visitors per month, and neither bad road conditions, nor the coronavirus lockdown have taken much of a toll on Rhyolite tourism, even with the fences around the Bottle House and the Rhyolite Depot locked and the public restrooms closed.

Olson noted that all the bus, van and bicycle tours that normally visit Rhyolite have been canceled, but visitorship is still quite heavy. He described conditions on a recent Sunday as “a free-for-all, a madhouse out here.”

“It was the first time ever that I’ve had to empty the trash two days in a row,” said the caretaker.

Many of the visitors are from out of state, and Olson theorizes that people who have traveled to visit Death Valley and find the park closed are turning to Rhyolite as the only thing to see.

He said one couple from Washington state told him that, rather than return to Seattle, they were going to camp out in the desert until the coronavirus emergency was over.