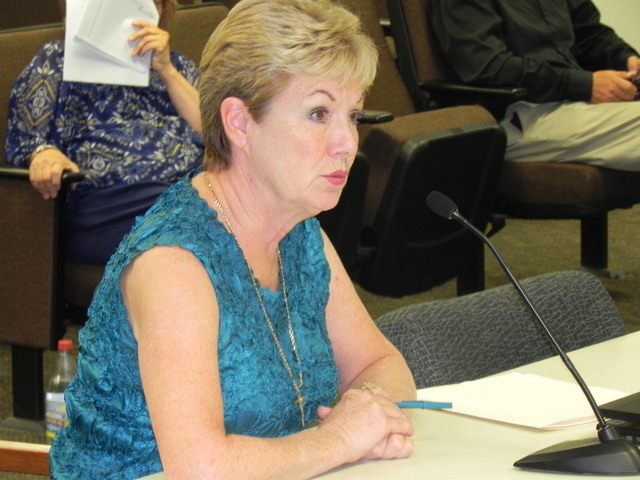 Last night’s Pahrump Town Board meeting may not have been the final curtain for the body.

A special emergency meeting addressing a recent $20,700 bill and other issues connected with the Adventure Springs project may be on the horizon, according to one board member.

“There is a possibility that it might happen, but it hasn’t been finalized or scheduled yet,” said Dr. Tom Waters on Tuesday, hours before the board’s last scheduled meeting. “It’s merely a possibility to complete the contract.”

At the same time, Pahrump Town Manager Susan Holecheck is taking heat for the actions of a previous town board and town manager who greenlighted the proposal with Los Angeles-based Contour Entertainment more than three years ago.

The issue arose after Holecheck said the town received the bill last month for the proposed tourist destination in town, which did not come to fruition several years after a development agreement was signed between the parties.

The town hired Contour for a design proposal for Adventure Springs.

Though board members and Holecheck thought Adventure Springs was a dead issue following a July 9, 2013 board meeting, the town still received the $20,700 bill last month from Contour President Chris Brown for services rendered on the initial phases of the project, slated for the Pahrump Fairgrounds site.

Last week, Nye County Manager Pam Webster appeared to have placed the blame directly on the shoulders of Holecheck by suggesting in an email the town manager was shirking her responsibilities on the Contour issue, even though Holecheck was still living in Mesquite when original contract for the first phase was signed in August of 2011.

On May 22, 2012 both Contour and the town entered into the second phase of the project, more than a year before Holecheck was hired by the town board. Phase two cost the town $207,000.

“Why is this my call?” Webster asked the town manager. “I have had absolutely no involvement with the execution of the contract, the management of the contract, or the lack thereof. This appears to be a conscious decision to avoid dealing with town business,” Webster stated.

The county manager went on to ask about why the item was not placed on this month’s town board meeting.

“You had knowledge of this issue well before the board meeting on the 9th,” Webster stated. “Why isn’t it on your agenda if you need board action to pay the invoice, and if not, why isn’t it in the parables on the agenda for approval?”

Waters said he too thought the Contour issue was dead.

On Monday, Waters said Holecheck’s role in the Contour deal was virtually non-existent, as previous town officials actually entered into the agreement with Brown. He noted that the town can still vote to pay the invoice at Tuesday’s final town board meeting.

“It can still be taken care of,” Waters said. “I think we can probably get together and just go ahead and do accounts payable or something else because we always vote on it when we’re not going to have a meeting. I’m sure it could be added to the next accounts payable.”

Waters also said he believes the county just wanted to have the issue settled before they take over town duties next month.

“I think we all thought that the Contour issue had been put to bed,” Waters said. “When this bill came up, we all said ‘wait a minute, we’ve already finished all of that.’ The thing I feel we should do is pay it, even though we feel we didn’t receive anything major for it.”

This week, Holecheck said Contour has not performed any additional work on the project since she was hired by the town board in July 2013.

“I met Mr. Brown for the first time in May 2014,” she said. “At the time, I told him that the project was not going to go forward because we needed to deal with water and power issues. He said that was fine and he sent a final bill, which I just assumed it might be a couple hundred dollars.”

“Since it didn’t seem like we were going to move forward, our board chair Harley Kulkin asked me to provide some information about the patent and reversionary issues, which I did. I then got a bill for $20,700.”

Holecheck said a binder provided by Brown to the town essentially contained information about the project that the town was previously presented with by Contour.

“Appendix A in the binder is what I gave to Contour about the reversion,” she said. “I didn’t ask them to do anything, because I gave it to them and they gave it right back to me. There were several other documents in the binder that had already been provided to us.”

Holecheck noted that a credit report contained in the binder was the only new information provided by Brown and his associates.

“They said the new part was the credit rating,” she said. “All they did was pull a credit report. This town has already paid about $300,000. We got some beautiful pictures and layouts and we did get an important sports study which was good, but I did believe the issue was over.”

Waters also spoke about why he believes the Contour project did not move forward. The lack of water and electricity on the fairgrounds site was chief among the reasons.

“We probably would have had it if the county commissioners had voted to put a sewage plant at the fairgrounds property,” Waters said. “I know commissioners Schinhofen and Borasky did everything they could to get it passed. We had one commissioner that came out staunchly against it and she was wrong but two other commissioners supported her and we lost the capability of moving forward with the fairgrounds.”

Waters was referring to the owners of the nearby Spring Mountain Motor Sports Ranch who offered to dedicate a $4.5 million water and sewer plant to the county if they agreed to operate the utility.

The development agreement called for the sewer plant to be built on the Pahrump fairgrounds site across the highway where effluent could be used to water the ball fields. Commissioner Donna Cox led the revolt against the action which was enough to sway fellow commissioners Frank Carbone and Lorinda Wichman to vote against the sewage treatment plant.

Due to time constraints, board decisions from last night’s final town board meeting will appear in Friday’s edition of the Pahrump Valley Times.