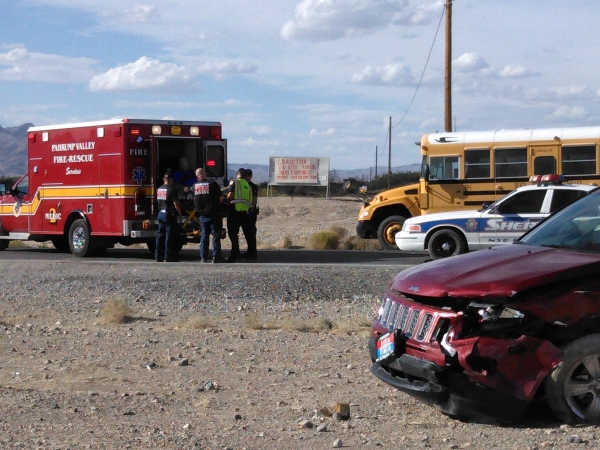 “Upon arrival we did a scene size-up and a risk assessment where we found a T-bone type collision with two people still in the car where one was mechanically entrapped and the other was medically entrapped in the back seat,” he said. “As part of the overall extrication process, the Engine One crew came in and performed a roof removal and a driver-side door removal allowing access to both patients.”

Lewis said the extent of injuries to both patients required them to eventually be airlifted to Las Vegas for treatment.

Both victims, he said appeared to be middle-age or older.

The occupants of the second vehicle all claimed non-injuries.

“We had wanted to utilize flight but both of the local Mercy Air helicopters were unavailable so we ended up closing down the landing zone portion and we transported three people to Desert View Hospital,” he said. “One patient was flown out later with a significant injury but they were initially treated by Desert View Hospital staff and then flown out.”

Lewis also said Nye County Sheriff’s deputies are still investigating the cause of the collision.

“Someone may have pulled out at the stop sign but that is being investigated by the sheriff’s office.”

The second collision happened on Monday at Blagg and Highway 160 where two people were transported to Desert View Hospital.

Both patients are expected to recover.