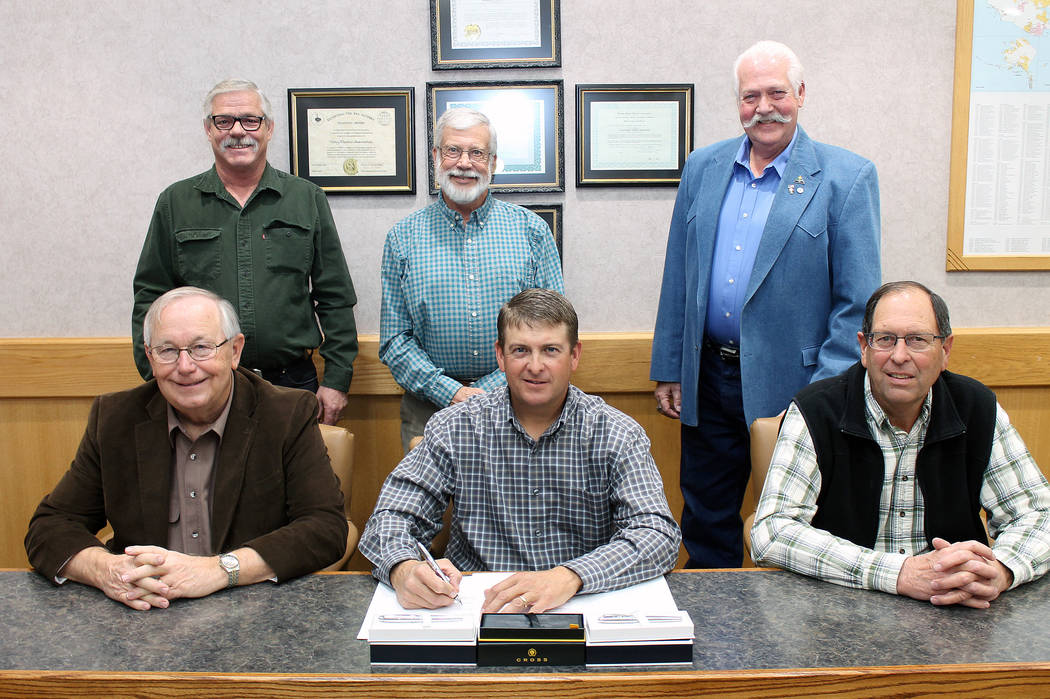 Valley Electric’s board of directors released a response to the allegations surrounding former CEO Thomas Husted and alleged cover-up of sexual misconduct claims and the search warrant executed at the co-op’s administrative offices on Feb. 22.

The sheriff’s office also refuted several similar statements made by Valley in a news release the co-op dispersed on Feb. 23.

“As elected members of the Board of Directors of Valley Electric Association, we would like to express our outrage at the unnecessary and likely unlawful search conducted Friday by the Nye County Sheriff’s Office at VEA offices, 800 E. Highway 372,” the news release, distributed on Feb. 25, from the board stated. Each board member from Valley’s six districts were noted at the bottom of the release.

“We were shocked at the unprofessional manner in which officers treated VEA employees when initiating the warrant – the same officers to whom our employees show the utmost respect on a daily basis,” the release continued.

In the release, the board maintains arguments made in an earlier release by Valley that the search violated Nevada law and the constitutional rights of those detained.

“We believe the heavy-handed manner in which the search was conducted violated Nevada law, as well as the constitutional rights of those detained,” the release stated.

Valley’s administrative offices were closed at 8:45 a.m. and for the following two hours while deputies and detectives conducted “searches of cell phones, personnel files, payroll records, other financial files, email, texts and other correspondence,” the release stated.

This is a point of contention for the sheriff’s office who doesn’t agree that the co-op was closed for that period of time.

The board also expressed concerns that they were kept in the dark for more than five hours on the reason for the search, according to the statement. “Officers denied requests by VEA CEO Angela Evans to contact counsel until approximately 1:30 p.m.,” the release stated.

“Innocent, law-abiding employees of VEA were denied access to outside communication and, as such, did not have access to legal counsel,” the statement read. “Deputies even required detained employees to ask permission before using restrooms.”

This was another point of contention for the sheriff’s office that answered to this in a video news release.

According to the release, officers arrived on scene at 8:32 a.m. Two minutes later, a copy of the search warrant was handed to Angela Evans by deputies, according to the sheriff’s office.

Sheriff Sharon Wehrly addressed all employees, who were all gathered in the conference room, at 8:37 a.m. “to outline the objectives of the search warrant and what was to be expected,” according to the video release.

“She was denied this request and told she would need to wait. The next time that investigators were aware that Evans wanted to speak to counsel, she was afforded that opportunity,” according to the video statement.

Board members also argued that no financial cover-up has occurred, pointing to “a recent forensic audit, which showed no financial irregularities,” the release said.

“Further, we were appalled that detectives seemed unaware of readily available on-the-record facts that refute the claims in the affidavit supporting the search warrant, as well as their outright disdain for laws they were sworn to uphold,” the release stated.

The board denied that recent rate hikes for Valley’s energy customers were due to a cover-up and hush money.

“Since May 2018, VEA has been transparent about actions we have undertaken to control Cooperative costs,” the board stated in their release. “Prior to that time, the Co-op was on a financial trajectory that was quickly exceeding our financial capabilities. Our actions including the decision to increase rates has placed us in a better financial condition.”

“It was no surprise to us to learn at the end of the day Friday that no current VEA employee is under investigation,” the release continued.

A similar point was made in Valley’s release.

“We have been assured by the lead investigator (Det. Jose Parra) that no one at Valley is under investigation,” said VEA CEO Angela Evans in their statement released on Feb. 23. “This investigation appears to involve former CEO Thomas Husted.”

In the sheriff’s office video news release on Feb. 25, the statement made about Parra was called inaccurate.

The board also questioned “the motives of Sheriff Sharon Wehrly, whom we hold personally responsible for the unconscionable and unprofessional manner in which the search was conducted. We intend to pursue all legal options.”

“Friday’s events, unfortunately, speak to the media-obsessed environment in which the Nye County sheriff’s department operates on a daily basis,” the release stated. “It’s all about the cameras. This was at heart a publicity stunt instigated by a small group that is spreading a false narrative about the motives and actions of our cooperative.”

The sheriff’s office made several rebuttals to both news releases from Valley and its board of directors. This is not an exhaustive list of all the arguments here. For more, check the Pahrump Valley Times’ coverage of this topic in its Feb. 27 print edition or at PVTimes.com.

Evans was arrested on Feb. 26 and was booked into the Nye County Detention Center for embezzlement of $3,500 or more, according to information from the sheriff’s office.

Valley released a statement on Wednesday, the day after Evans’ arrest.

In the release, it was stated that “regarding recent events involving Valley Electric Association, we would like to assure members that VEA will cooperate fully and transparently with authorities. VEA regrets the current circumstances, and we have initiated our own internal investigation. We remain committed to our members. Services will not be affected.”

Evans made bail of $5,000 on Feb. 26, according to officials at Pahrump Justice Court.

A court appearance is scheduled for Evans on April 29 at 9 a.m. at the Pahrump Justice Court.

Valley said Evans is currently on administrative leave pending an investigation, which will be conducted by an outside, third-party firm, a spokesman for Valley said.