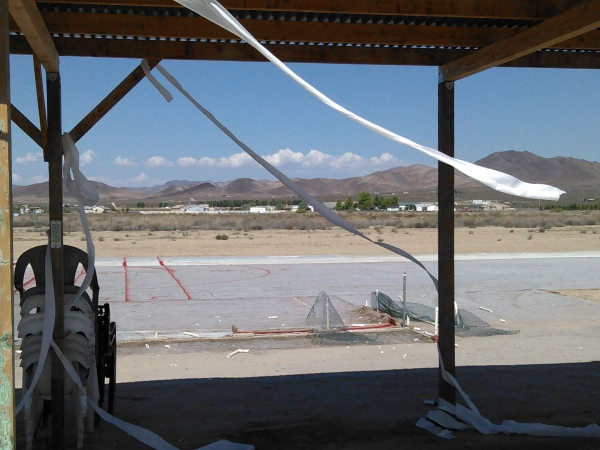 “We are just 27 guys trying to keep our hobby going.”

Those words are from local resident Larry Chapman, president of the Pahrump Valley Model Aviators Club, who was busy Wednesday morning surveying the damage by vandals to the clubâs site at Murphy Park.

The club is for radio-controlled model airplane enthusiasts who fly their model aircraft at least three times a week on a multi-acre plot of land on the valley’s far north end at Murphy Park.

Chapman and club members want to raise awareness of the recurring attacks on the site’s property to residents in the area bordering Basin Avenue, as well as Bannavitch and Corbin streets.

He said it’s not the first time the site has been vandalized, while noting all of the repairs come from the annual dues club members have to pay. Members are now sizing up the cost to repair the site.

“Somebody stole about 60 feet of fence a couple of months ago and we had to replace that,” he said. “We have had the cops out here three times from last year up to this year. All they can really do is take a report unless they catch them in the act and we understand that.”

Damage to the site was extensive.

Chapman said he believes the crime took place between Tuesday afternoon and Wednesday morning, as tables were overturned and toilet paper from the portable restroom was strewn about the property.

“We flew on Tuesday morning and it was fine here,” he said. “Our club logo sign is completely destroyed and they really did it in this time. The flight barrier that protects us was also destroyed but luckily they didn’t get on top of our shade structure and destroy that.”

Following each act of vandalism, sheriffâs deputies respond and make a report.

Chapman said he believes teenagers in the area may be responsible for the damage, and urges nearby residents to say something if they see something.

“I just want the community to know about this and I want the homeowners to the west of this property to know it was probably one of their kids that did this,” he said. “They must have walked in because there are no tire tracks out there.”

As far as a motive Chapman has suspicions about who may be behind the culprit.

He spoke of a man who complained about the noise some of the planes make when club members come together and fly.

He noted some of the planes are gas powered.

“We don’t know who the gentleman is who made the complaints but he lives in the homes just west of us,” he said. “We changed it so nobody can fly gas planes until 9 o’clock in the morning to help with that. The first time this happened it was an elderly gentleman and about a week or so later, we had all the vandalism happening.”

Despite the incidents, Chapman said he and club members will continue to fly three days a week at the site.

“There is really nothing we can do to prevent this type of thing,” he said. “If you put cameras up of any kind you need electrical service and we don’t. I really hate this kind of behavior. People try to have something nice and other people come in and they destroy it. I left California to get away from this type of stuff.”

The Nye County Sheriffâs Office is seeking information on who is responsible for the crime at (775) 751-7000.

For information on the club, logon to pahrumpvalleymodelaviators.com