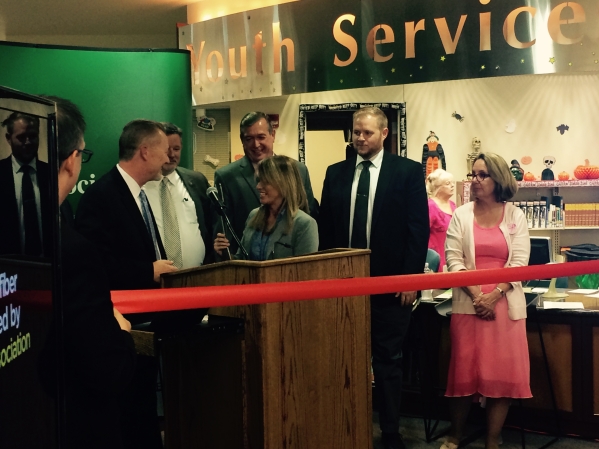 High speed communications are coming to rural areas of Nevada, as Valley Electric Association rolled out its first broadband initiative in Pahrump.

“There’s not anybody within the community or within our service area that will not be touched positively. It’s a very positive program across our entire service area and that’s phenomenal when you think of a program such as this. Sometimes, you will touch the majority. In this particular case, we touch all of our members with positive attributes from raising the value of homes to health care to school to economic development,” Husted said ahead of the ceremony.

VEA started as a small rural electric utility cooperative in 1965 and now provides service to more than 45,000 people along the California-Nevada border. The VEA service encompasses a 6,800-square-mile area.

Construction is currently underway for the first phase of the broadband initiative that will include a large portion of Pahrump in addition to Fish Lake Valley, according to a VEA press release.

Once the work is complete, Pahrump and other areas of the Valley Electric service area will be the only communities in Nevada with direct connections to a fully optical fiber broadband network, officials said.

With the new service, the library will be getting up to 1 gigabit-per-second Internet speed, Pahrump Community Library Director Susan Wonderly said. The library averages over 21,000 patrons who use computers and over 12,000 mobile devices, Wonderly added.

Pahrump resident Dorothy Lawson said she plans to use the Internet for online shopping and education.

“I think it will be beneficial for all people here in Pahrump because when you live in a rural area, it’s very hot to have high speed anything and it makes a big difference in that. This isn’t just a library, but it’ll help to sell your home, you will have high speed for people who want to move out of Vegas or somewhere else.”

Nevada Assemblyman James Oscarson said the service will help to attract more businesses and services to rural parts of the state.

“What’s happening here is a start of an economic boom, not only for Pahrump but for all the areas that Valley Electric services,” Oscarson said. “There certainly is going to be a great opportunity. This is infrastructure that we desperately need. … This is the actual infrastructure businesses use today to grow and develop their businesses in rural areas and that’s what we are looking forward to.”