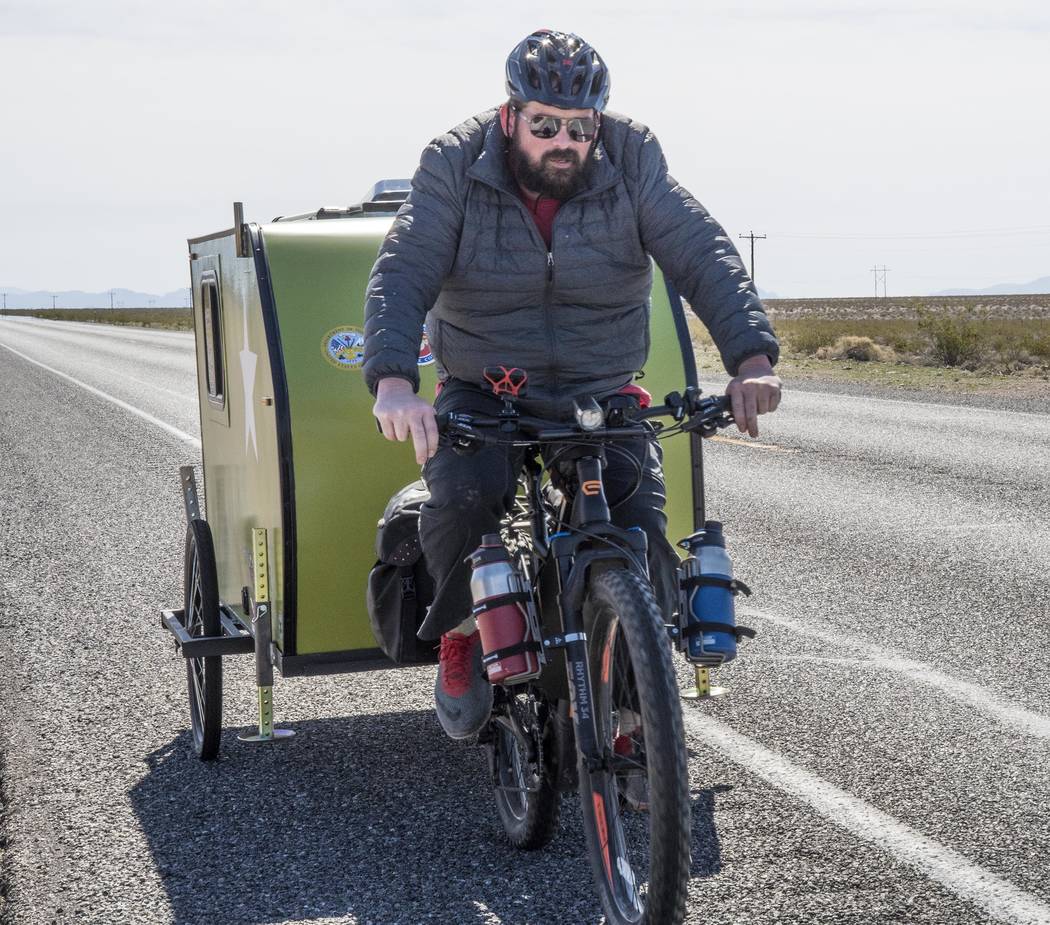 Richard Stephens/Special to the Pahrump Valley Times Eli Smith pedaling between Lathrop Wells and Beatty before the hit-and-run crash. Smith, an Army veteran, is traveling the four corners of America. 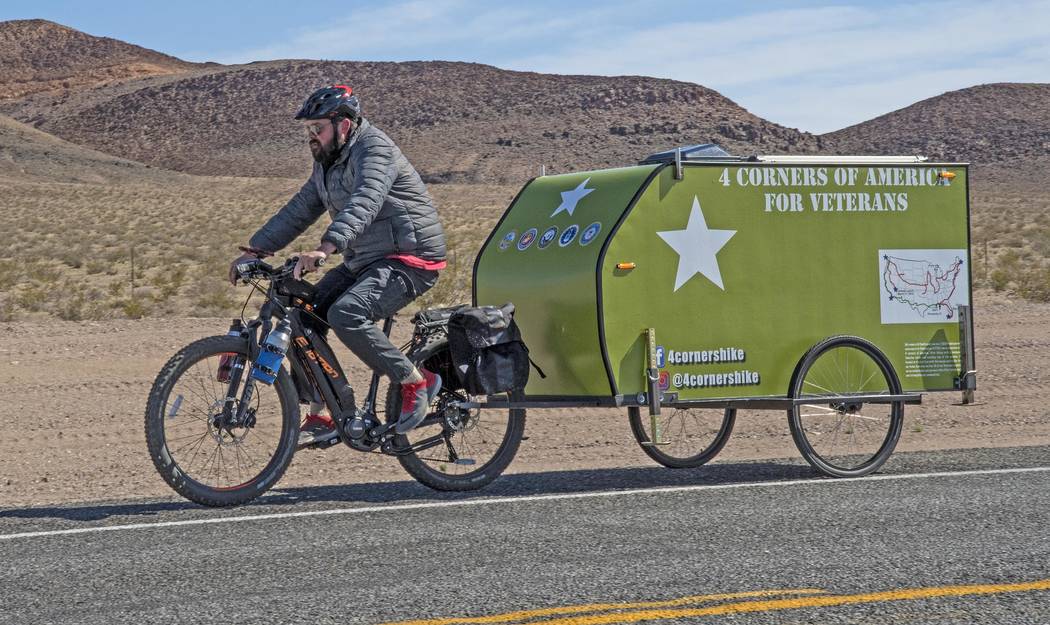 Richard Stephens/Special to the Pahrump Valley Times Eli Smith was not injured, and the damage to the trailer was repairable. He is shown pedaling between Lathrop Wells and Beatty before the hit-and-run crash. 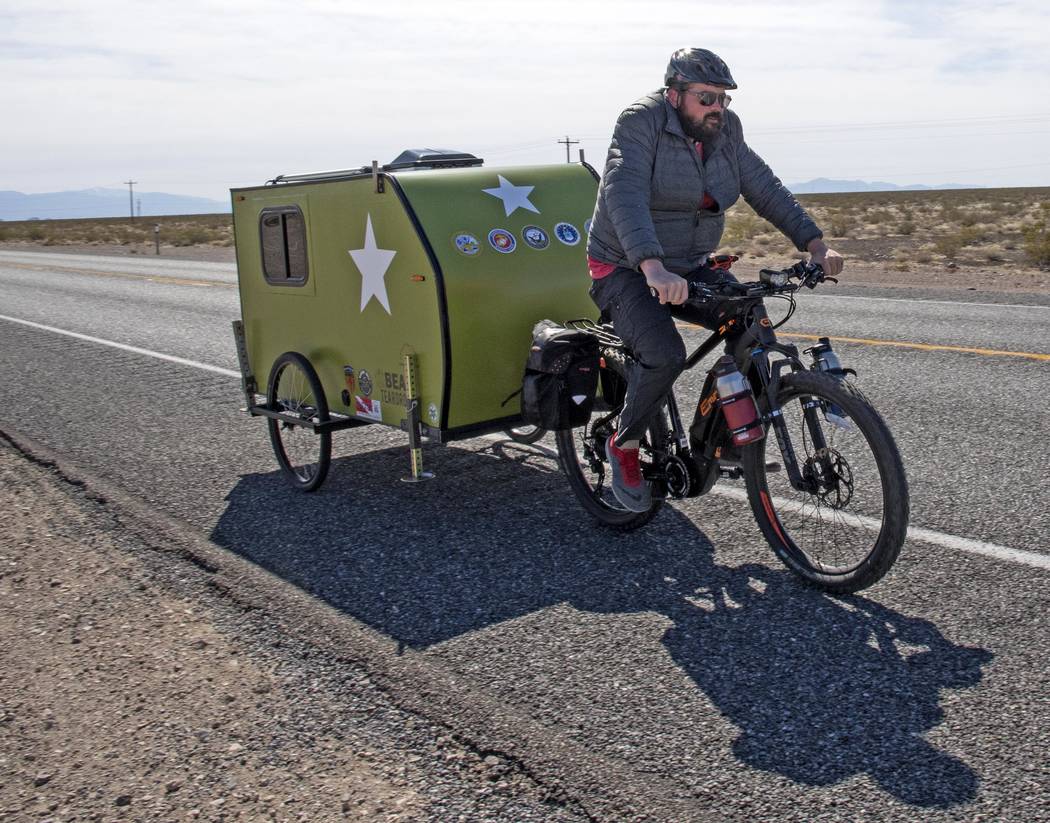 Richard Stephens/Special to the Pahrump Valley Times Eli Smith sold everything he had, except for a few keepsakes, to finance the beginning of his journey, but now mostly relies on “donations and the kindness of strangers.”

“You can’t control moronic drivers and the weather,” someone told Eli Smith after he was hit by a car on his way from Lathrop Wells to Beatty March 24.

Smith, an Army veteran, is traveling the four corners of America to raise awareness of PTSD and veteran suicides caused by it. He points out that we lose an average of 20 veterans a day to suicide.

He managed to walk from Pensacola, Florida to San Diego, California, and from there to Neah Bay, Washington before a bad knee forced him to change his mode of transportation.

Bear Teardrops, of Oceanside, California, built Smith a one-of-a-kind trailer to pull behind a bicycle, and he launched the latest part of his anticipated 14,000 total-mile trek from Las Vegas on March 17. The plan is now to pedal to Seattle, then across the country to Quoddy Lighthouse in Maine, then down to Key West.

He left Lathrop Wells for Beatty on the morning of the 24th.

Members of the Beatty VFW post were set to meet him as he came into Beatty to escort him to the post, of which he is now a member.

The driver who struck his trailer did not stop, and he says he didn’t even see the car because he was too occupied with trying to keep upright on the bike. His trailer is just about as wide as the area of pavement to the right of the white stripe on the road, and he believes high wind was a factor in the crash.

He was not injured, and the damage to the trailer was repairable, but he decided it would not be a good idea to try to continue before the wind died down. He was able to get a room at the Exchange Club Motel at a reduced rate and hunkered down to wait out the weather.

Smith sold everything he had, except for a few keepsakes, to finance the beginning of his journey, but now mostly relies on “donations and the kindness of strangers.” Some of the donations come from those who follow or visit his 4cornershike Facebook page, where he posts updates on his progress.