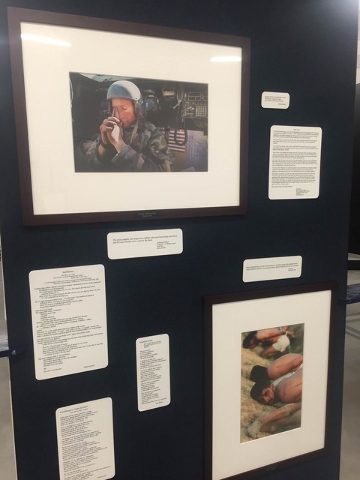 An exhibit that reflects upon the cost of the freedom each American enjoys will enter its final week at the Pahrump Valley Museum.

The celebrated war memorial Titled “Always Lost: A Meditation on War,” began its two-week run at the museum on July 4, when the country celebrated its independence, and runs through July 18.

The arts and humanities exhibition includes the faces and names of around 7,000 U.S. service members that died in Iraq and Afghanistan wars.

“With a large military retirement community in this area, the Pahrump Valley Museum is honored to have the “Always Lost: A Meditation on War Exhibit” displayed at our museum in remembrance of all those who have served our great country,” said Marilyn Davis, museum director.

Pahrump resident Dr. Tom Waters, who had a lengthy military career, will be part of a special speaking engagement Saturday at 1 p.m. at the museum. Dr. Waters was a longtime member of the United States Air Force and the Illinois Air National Guard.

Post-retirement, Waters’ efforts have been directed toward education, community service, and the ministry. Dr. Waters is a recipient of numerous military and civilian awards and recognitions, including the Purple Heart.

The exhibition displays the personal and collective costs of war through original poetry by Nevada writers; the 2004 Pulitzer Prize-winning Iraq War combat photograph collection courtesy of The Dallas Morning News; and the Wall of the Dead, which includes faces and names of U.S. military war casualties in Iraq and Afghanistan since September 11, 2001.

The exhibition was selected as an official NV150 Sesquicentennial exhibit by the NV150 Commission and Pahrump is the ninth venue during the statewide tour sponsored by the Nevada Department of Veterans Services.

NDVS Community Outreach and Engagements Director Tony Forbes is a veteran of the wars in Iraq and Afghanistan and expressed his appreciation for the exhibit.

“I hate war and all that comes with it,” Forbes said. “I love America and all that she offers, especially freedom. In Always Lost, I see the faces of heroes and am reminded that I hate war and yet love America. I will always hold the men and women of our military in the highest regard and forever honor those that have paid the ultimate sacrifice. Thank you, Always Lost, for reminding us of the cost of freedom.”

“Always Lost” was praised by U.S. Senators Harry Reid and Dean Heller, who hoped that the exhibition might someday makes its way to Washington, D.C. Carson City Mayor Robert Crowell calls the exhibit “our community’s gift to the nation,” and Governor Brian Sandoval recognized it with an official proclamation on Veterans Day, 2014.

Beginning as a class project at Western Nevada College in 2009, “Always Lost” has since captured the nation’s attention, and has been bringing a message of awareness and unity to communities across the U.S. since 2010.

A second copy of the exhibition is currently touring the state of Minnesota. By mid-2016, “Always Lost” will have been displayed at 50 venues across the country.

A comment written in the guest book that travels with the exhibition sums up the exhibit.

“You could not possibly leave this exhibition the same person you were when you walked in.”

The exhibit is open for viewing at the Pahrump Valley Museum, located at 401 East Basin Avenue, Tuesdays through Sundays from 9 a.m. to 5 p.m.