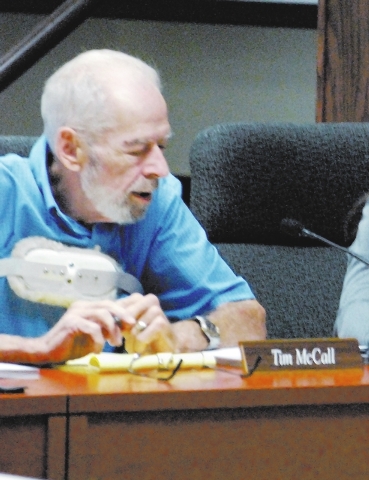 Nye County Water Board member John McLaughlin paid homage at the start of the Monday board meeting to former chairman Tim McCall, an authority on local water issues, after his death Sunday.

McCall was a broker for Terry Hand Realty when he was appointed to the water board Feb. 3, 2009 following its creation by Senate Bill 222 in the 2007 state Legislature. He served as chairman before stepping down for health reasons. In his application to the water board, McCall said he came from a family with a long history of farming and ranching. He had been licensed to sell real estate since 1997 and was a member of the comprehensive zoning task force, charged with zoning a remaining 1,251 parcels of land in Pahrump after the zoning map was approved in 2007.

“He was one of the initial members of this board, instrumental in setting up the goals, objectives, procedures, policies and the fiscal guidelines of the water district. His knowledge of water issues, practical applications, history and water law in the West, along with the history of the Pahrump Valley development and politics can only be matched by a few people.

“I strived to be just half the man he was while mentoring me. But he always let me make my own decisions. Let us continue in these footsteps set before us, of facts, not speculations, highest and best use practices for all resources, best judgment for the community, economy and their environment and remember: service first, politics never, those were his ideals.”

Two members who also had been on the water board since inception, lauded McCall’s knowledge on water issues.

Donna Lamm said McCall was active in other committees, including a zoning task force. Lamm said his health seemed to be going downhill at the last couple of water board meetings, but she still was shocked to hear of his death.

“He was very knowledgeable about water rights. Tim was a good guy and he did a lot of volunteer work for the town and of course he was in real estate for a long time. He was great to work with, I really liked him as a person and he was very, very concerned about our future in Pahrump and what we need to take care of in order for it to be a better place,” Lamm said.

McCall also helped the water board with his knowledge of ranching and mining, she said.

“He was one of our founding board members on the water district board. He was there from the beginning and was actually chairman at one time there. He had a tremendous knowledge of water rights and the history of development, especially in the Pahrump area. We’re really going to miss him,” Nye County Water District General Manager Darrell Lacy said.