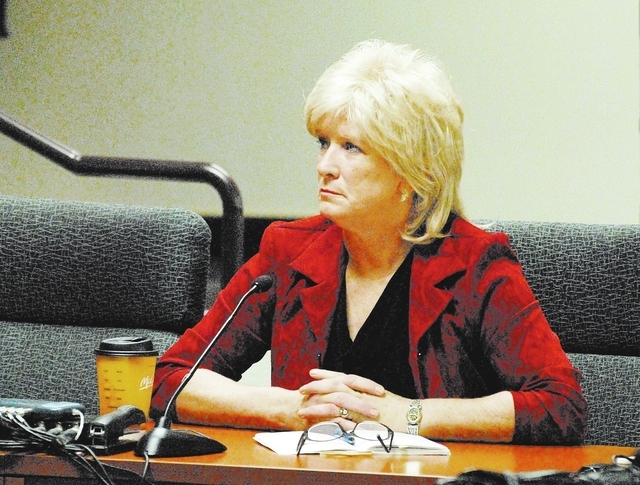 Nye County water board member James Eason, also the Tonopah town manager, feels a little bit like the late comedian Rodney Dangerfield: he gets no respect.

Eason wanted to hear from county commissioners Tuesday whether they needed the water board when so many of their duties overlap. The Nye County water district was created by Senate Bill 222 in the 2007 state Legislature. The primary focus was to deal with the Southern Nevada Water Authority, over concerns the SNWA wanted to file for water rights in Nye County. The county needed a water authority to deal with the SNWA. The water board held their first meeting in March 2009.

“You do not trust this board to work with you on the acquisition of Pahrump Utilities, we are not involved with other matters in this county involving water,” Eason said. “Do you feel comfortable with us taking the lead on that and if you do not, no harm, no foul. Don’t waste each others’ time. Nye County staff is competent to handle these things.”

The water district was told to concentrate on everything involving water, a widely encompassing task.

Eason said that could include purchasing a utility, negotiating water rights in Railroad Valley, debating the importation of water and sitting down with State Engineer Jason King, who wants to implement Assembly Bill 419 setting up a critical management plan for the Pahrump groundwater basin.

“I envision this board handling all the water rights issues for the county and taking that off the staff’s hands,” she said.

Nye County Water District General Manager Darrell Lacy said the board has commissioned a number of studies to come up with good science trying to understand the water situation. A groundwater evaluation grant was used to fund the district the first couple of years, he said.

Lacy outlined the accomplishments of the water district studies: a Pahrump groundwater flow model developed by the University of Nevada, Reno;

a Community Water Source Protection Plan identifying every water source in the valley and threats to that source;

they’re in the final stages of a water supply appraisal investigation;

they took the lead in drilling a well for the Pahrump Fairgrounds using a grant;

“The dropping groundwater level, over allocation of water rights and population growth, these are all things that need to be looked at if we’re going to draw up a plan that’s going to address this,” Lacy said about the overallocation of water in Pahrump Valley.

“There has been some negative press on that. To me if this board is looking at specialized people who have some background in whatever we should think about putting that in our appointments for somebody to submit to the board,” Borasky said.

Carbone said the development of a groundwater management plan should involve a broad array of water rights stakeholders. Wichman said one of the most important duties of the water district is the education and engagement of the public.

“When you’re trying to find a way to have your resources match what your needs are, absolutely everything is on the table,” Wichman said.

But Eason said, “this board was to work with the SNWA. That is not happening.”

“We had some discussions with the SNWA off-line. They are not going after the water rights in Railroad Valley. Economically they’re not going to do it,” he said.

Water board member John MacFarlane said the purpose of the district as specified in the legislation was “to secure and develop sustainable resources of water.”

He said water board members are experienced, well meaning and concerned.

County Commissioner Donna Cox had a less benevolent image of the water board.

“I think we’re creating a monster. I don’t want it to turn into the Las Vegas Valley Water District or the Southern Nevada Water District. Those people started out like we were and ended up wasting a lot of money,” Cox said. “I’d like to see they just become an advisory board and the county commission makes the final decision on things.”

The water district was granted a number of powers in the legislation, to sign contracts, purchase water rights, issue bonds and other duties without approval of the county commission.

Cox asked for an agenda item to let the public decide whether they want to keep the Nye County water board.