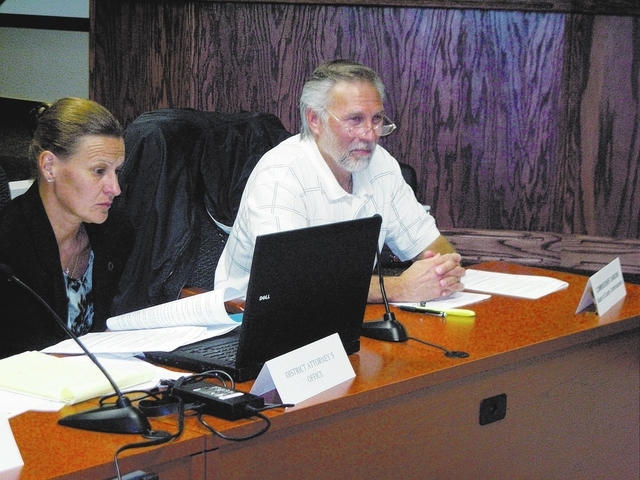 In a sign of the changing times, concerns over water were raised when the Pahrump Regional Planning Commission Wednesday considered a tentative subdivision map to divide 16 acres on East Simkins Road between Blagg Road and Highway 160 into 74 lots.

Shadow Mountain Construction received approval for the subdivision map twice before, in 2004 and 2008, but has had to revisit the RPC for approval because a final map wasn’t submitted within two years. The first approval came before Nye County adopted zoning in 2007, the second time the RPC approved a waiver allowing lot sizes smaller than 8,000 square feet in the village residential zone, the plan is for lots ranging from 6,501 square feet up to 11,928 square feet.

It’s now 2013 and Commissioner Frank Carbone, the liaison to the RPC, warned the Pahrump Basin is overallocated with water rights and there may not be enough water in the aquifer for future projects.

“We do have an issue in here with water and now we’re introducing smaller lots into the mix,” Carbone said.

The Nye County Water Board has been discussing ways to meet possible edicts from the state engineer’s office to deal with an overappropriation of water in the Pahrump Valley. They include suggestions to limit future parceling to five acre plots or larger and the donation of more water rights.

“Today there is no process to say you need to figure out how much water you need to use but I can say that is coming soon,” Carbone warned.

Consultant Dave Richards, with CivilWise Services, said they have held discussions with Desert Utilities about servicing the possible subdivision. A will serve letter was already issued by the utility for 37 lots in phase one. Nye County Code does allow a minimum lot size of 6,000 square feet if the lots are served by a public water and sewer system.

RPC Chairman John Koenig asked, “what do you want me to do?” He said their hands were tied because there are water rights approved for that development, like other undeveloped lots.

Richards said utility companies already manage their water use, the problem is more about development occurring outside of utility company boundaries. Richards said his developer would be willing to adopt restrictions on irrigation and landscaping. They have already spent considerable money on previous studies, he said.

Resident Kenny Bent said approving granting waivers for even smaller lot sizes than zoning permits would be “a slap in the face” to the state engineer. He added, “I’m pretty assured approving a high density subdivision would be a direction that’s not going to make him happy.”

Koenig said the county normally gets something in return for waiving lot sizes, like improvements spelled out in development agreements, he pointed out Simkins Road was in horrible shape. RPC member Bruce Earl had concerns over the drainage onto Simkins Road, Richards said there are improvement plans for bar ditches down that road.

The RPC approved the map but is requiring 8,000-square-foot minimum lots after RPC member Bob King said he didn’t think the Pahrump community would be happy with 6,000-square-foot lots.

Koenig remarked, “if it gets approved tonight, it would be nice to see dirt turned.” Richards said if the economy continues to improve there will be development.

Of 14 site development plans reviewed since enactment of the ordinance December 2011, Lee said only one, the Inspirations Assisted Living Center, was larger than 20,000 square feet where under the 3-2-1 concept planners had 15 business days for the initial review, 10 business days to consider the applicant’s comments and five business days to look over final revisions.

“A 3-2-1 review schedule requires us to put other things on hold,” Lee said. The change would take effect as planners are waiting on phone calls to set up appointments with developers to review plans.

“Growth in this valley is starting to come back. In the last two years we’ve had 14 projects submit development plans,” Lee said. “She indicated planners could have more work ahead of them soon after the economic doldrums. “I have ongoing discussions with 12 potential developments that could start up in the valley.”

Koenig wanted to relax requirements to pave parking lots. Community Planner Cheryl Beeman said Nye County has met conditions by the Bureau of Air Pollution Control and may be able to join a state plan in May, that has been enacted in Reno and Las Vegas, which could allow the county to come up with alternative programs to reduce dust. When the county dust control plan was created, most of the problem was caused by dirt roads, many of which have been paved, she said.

“I get upset with people who want to bring a business in and we look at them in the eye and say you’ve got to pave your lot. All they can see is dollar signs,” Koenig said.

County commissioner Butch Borasky said a property owner on Bell Vista Avenue was permitted to water his dirt parking lots which had little traffic volume. He said not everybody can afford to pave parking lots with two inches of asphalt, they should be able to use chip seal.

Beeman said the revisions to the 2003 Pahrump Regional Planning District master plan must be completed by June, with presentation to the RPC expected by April. Koenig said the master plan committee will have been working on the revisions for three years this January. He wanted to eliminate areas north of Roadrunner Road from the Pahrump planning district.