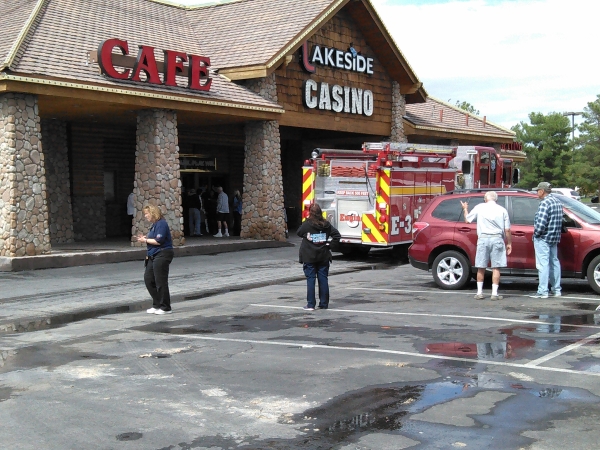 The recent thunderstorms created some challenges for local emergency crews responding to calls for service over the weekend.

Pahrump Valley Fire and Rescue crews were summoned to numerous incidents along flooded roads in the valley.

Fire Chief Scott Lewis said crews responded to brush fires caused by lightning on Sunday, but most were extinguished upon their arrival.

“There was one on Landmark Street at approximately 11:23 a.m. and we had another lightning strike in the area of 2421 South Dandelion Street,” he said. “We also had another one reported about four miles up on the alluvial fan area off of Fort Churchill and Black Rock, but that was deferred to the U.S. Forest Service.”

Lightning strikes aside, Lewis said many businesses were affected by power surges caused by lightning.

He also said the fire department was receiving reports of water damage where rooms at local casinos were closed due to water runoff entering rooms from the roof.

“We responded to numerous alarm systems calls due to power interruptions over the weekend and there were actually one or two alarm systems that actually fried out affecting several businesses here in town,” he said. “We were also getting reports of water damage at particular businesses and casinos. There were no calls for water rescues along the roadways, but I think the interruption between thunderstorms allowed for things to kind of calm down, but it picked up again.”

The calls for service included a two-vehicle collision on the north end of town on Friday, Lewis said, where two people were transported to the local hospital.

“On Blagg and Simkins Road, we had a two-vehicle accident involving a transport van and a car,” he said. “We had to extricate several of the elderly patients out of the back of the van and two were transported locally from the scene. We also had a report of a two-vehicle collision at Charleston Park and Highway 372, but both vehicles were gone upon our arrival.”

On Thursday, fire crews were summoned to a mobile home fire along Cynthia Street, following reports of smoke coming from the home’s interior.

“It broke out around 7:54 in the morning after there was a report of a smoke investigation in the area of Linda and Wilson Street,” Lewis said. “As we were responding we were told that the reporting party said the structure was now involved so we upgraded the assignment to a structure fire and brought all of our resources in.”

As crews worked to extinguish the fire, Lewis said they made a surprising discovery.

“They quickly extinguished it and they found that there was one occupant inside the structure who was unaware that their house was on fire,” he said. “They removed the occupant safely and they reported no injuries. They also removed an exotic snake and two cats, which were all uninjured. The crews did a great stop on the fire, so it clearly could have been a very bad situation.”

Lewis said overall, crews faced a very busy weekend under challenging circumstances as a result of the rainfall.

The challenges included dodging debris from the runoff.

He also noted there were no water rescues even though many valley roadways were inundated with floodwaters.

“The debris caused by the rushing water along the roadways hampered our response times,” he said. “Crews had difficulties getting down parts of Highway 160 and Homestead Road, there was a lot of debris and a lot of water crossing both of those areas. Ambulance calls were the same thing where they were hampered because they could not go the normal speed along the roadway to get to these incidents.”

Lewis also spoke about how the town’s building and grounds crew averted what could have been a serious situation at the town office on Highway 160.

“The rainwater was actually coming over the highway and going down towards the Pahrump Town Office,” he said. “Thank goodness our buildings and grounds crews acted quickly and diverted that water because it could have been a very serious problem at the town office. Buildings and grounds crews under Matt Luis’ supervision did a great job in preventing that from happening. We notified them and several other people throughout the town and we spoke with emergency management and the county/town manager and informed them all as to what was going on and there were great communications through all of the agencies involved.”