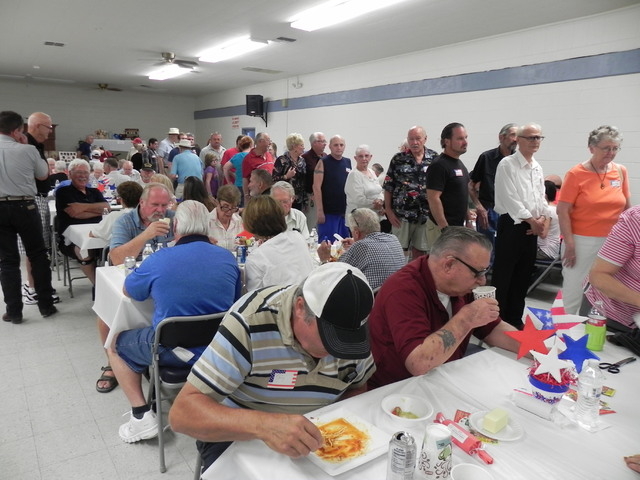 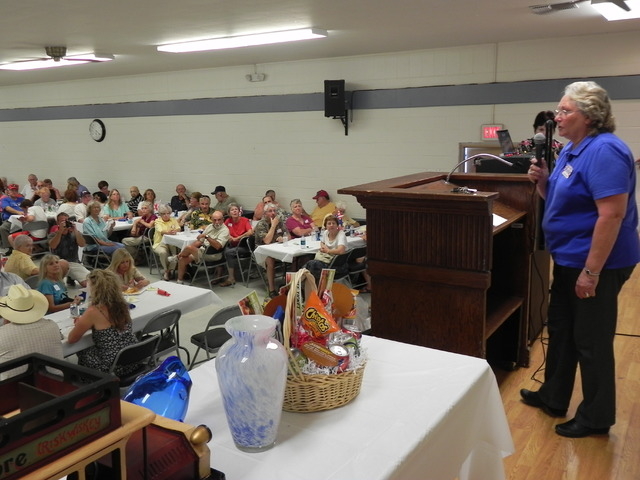 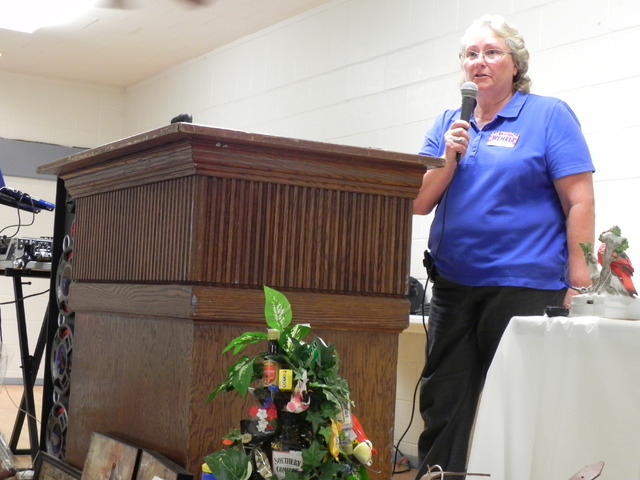 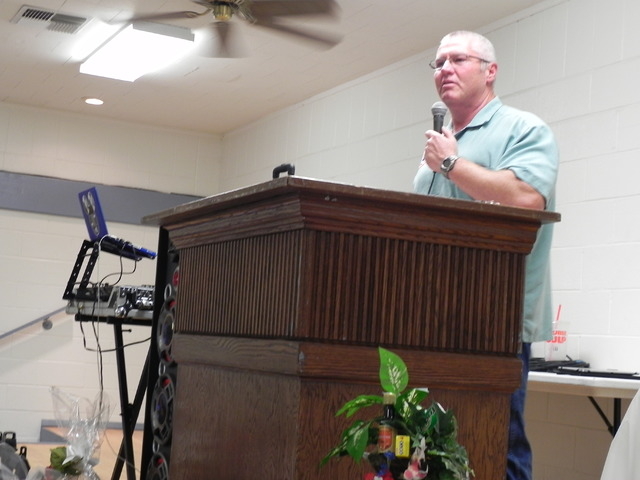 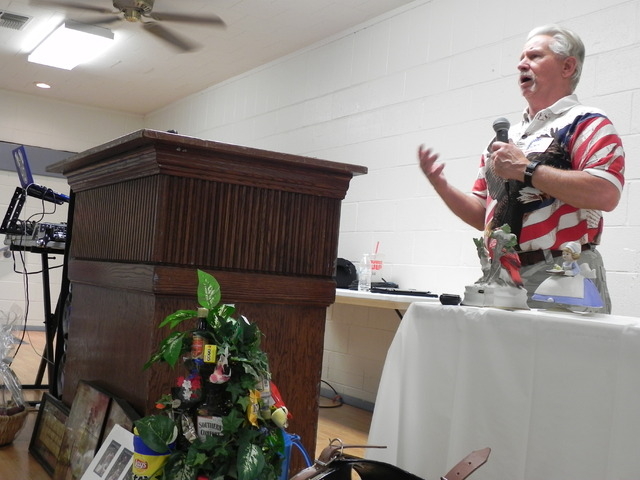 Former Nye County sheriff’s candidates Bill Becht, Galen Morgan and Mark Zane took to the podium during a packed fundraiser of about 300 people Saturday at the Bob Ruud Community Center to announce their support for the top vote-getter in the primary, district attorney’s investigator Sharon Wehrly, in the Nov. 4 general election.

“You just can’t believe how wonderful this is. I had a speech prepared but it just kind of blew away,” Wehrly joked in brief remarks before the crowd, who plunked down $5 per plate of spaghetti at the fundraising dinner. But she warned, “it looks like from here on out it’s going to be kind of rough sailing and I hope you all will hang in there with me.”

Wehrly told the crowd to be patient with her, she didn’t intend to do any candidate bashing. Her opponent is Assistant Sheriff Rick Marshall, who finished in second place in the June primary. His campaign has been bedeviled by controversy, with a brother facing trial in April on child porn charges, a son-in-law and fellow police officer busted in February on felony drug charges — who seven months later is still collecting a county paycheck — and his own arrest in April during a political stunt orchestrated by a now-defanged detective. Marshall was even charged by the attorney general’s office, but the misdemeanor injury to property is expected to be dismissed by a judge on Thursday.

Wehrly read a letter from whom she jokingly called “the infamous” detective David Boruchowitz, president of the Nye County Law Enforcement Association, who wrote over 70 percent of the NCLEA membership endorsed her, the union representing sheriff’s deputies, detectives and sergeants.

Former Capt. Bill Becht, a 24-year veteran of the sheriff’s office, said it was an honor to work with Wehrly over the years.

“The one thing I know about Sharon that I’ve experienced with Sharon is she has integrity and ethics and that’s really important,” Becht said. “She talks about ethics and not running a smear campaign. Ethics and integrity, if you have them, you don’t need to run a smear campaign.”

He criticized people who hide behind a pseudonym or fake name during political campaigns and not conduct business under the light of day.

“Sharon needs to turn the light on and that’s what she needs to be elected to do,” said Becht, who retired from the sheriff’s department last year and finished third in the primary just behind Marshall.

Morgan who ran as “the constitutionalist sheriff” said the different candidates worked hard to win the primary, but all worked together to avoid mud slinging and dirty campaigns.

“We wanted to win on our own merit and Sharon has proven that,” Morgan said. He added Wehrly met him at his home at least six times since the primary to answer his questions.

“Sharon believes the same way I believe. She believes in the Constitution and believes in protecting the citizens and holding the people accountable,” Morgan said. “She brings more in her skills in management and budgetary management and staff management than anybody working currently for the sheriff’s department in the administration today.”

Zane, who won the northern Nye County primary vote and was formerly an undersheriff for Harold “Stick” Davis, said endorsements normally ring hollow; he can’t get all his supporters to blindly support Wehrly. But he added, “the thing that rings important for me is all of us together collectively represented a certain amount of support from throughout Nye County and all of us collectively, together, without the benefit of some prominence or without benefit of some gift or gratuity, all have come together and all are supporting Sharon Wehrly to be your next sheriff.”

“I have a little bit of a disagreement on a smear campaign because for me I don’t think telling the truth is a smear,” Zane said. He added that running a clean campaign could be why he wasn’t elected to anything, to laughter from the audience.

“We all worked with Sharon over the years, she’s always been a tireless volunteer for this county. There were just innumerable and immeasurable things she gave of her time and her effort and her family over the years and it’s my extreme honor to be here and support Sharon in any way that I possibly can in trying to make sure that this department moves in a forward direction and the people of this county enjoy what they’re entitled to and that is good, honest, ethical service for the millions of dollars you’re expending,” Zane said.

After the speeches, Wehrly said she would walk around the audience and answer any questions individually while auctioneer “Ski” Censki auctioned off numerous items and announced raffle prize winners.