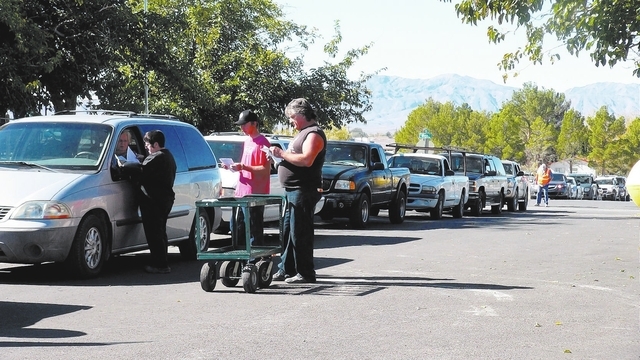 While the needy enjoyed a free Thanksgiving dinner Thursday thanks to the NyE Communities Coalition Holiday Task Force, during the rest of the year there is a big demand for food aid in Nye and Esmeralda County.

The Nevada Division of Welfare and Supportive Services has 8,573 recipients on the food stamp program in the Nye and Esmeralda counties area, all served by the Pahrump office, with $1.04 million in total payments this month, according to staff specialist Miki Allard. That’s an average of $121.31 per person per month.

Payments from the program, known as the Supplemental Nutrition Assistance Program (SNAP), were below $1 million per month in 2010, with $991,740 in payments to the two-county area. By November 2011, the payments had risen over the million dollar mark to $1.06 million.

The payments have dropped by $23,000 from two years ago. Allard said food stamp payments were increased in 2009 under the American Recovery and Reinvestment Act (ARRA) also known as the stimulus package. Those increased payments ended Oct. 1. For a family of four, monthly food stamp benefits were cut $36 per month, for a single person they will receive $11 less as the federal government deals with the ballooning costs of the program during the recession.

The number of food stamp recipients in Nye and Esmeralda counties also decreased slightly, by 86 people during the two-year period. That came after a 39 percent increase in SNAP recipients from 2009 to 2011 due to the economic slowdown, when the program fed 6,708 people in both counties.

The number of Medicaid recipients also dropped slightly in the two-county area, from 6,915 in 2011 to 6,843 this year, or 72 fewer recipients. The medical program for the poor is funded 55 percent by the federal government, 45 percent by the state.

Federal funds through the Community Services Block Grant (CSBG) program to Nye County Health and Human Services were cut from $122,696 in fiscal year 2012-13 to $105,043 in the current fiscal year. Funding for a separate Welfare Set Aside program was cut from $10,500 last fiscal year to $8,000 this year. Nye County Health and Human Services had 54 clients enrolled in CSBG programs this month. The county helped 62 clients with gas vouchers, 61 clients with energy assistance and processed 11 applications for state welfare among a total of 130 clients this month submitting applications for service. County HHS opened 83 new medical indigent cases.

Local providers outside the government noticed an uptick in requests from the needy this Thanksgiving. The line stretched down the block during the latest commodity giveaway at Path of Hope, run by new Hope Fellowship Church.

“We fed 558 families, which is the largest we ever fed this year in the two years I’ve done commodities,” said Sandy Tucker, Path of Hope ministry leader. “It was over 2,000 people.”

When Path of Hope took over the commodity giveaway program from No To Abuse, Tucker estimated there were only around 300 families served during each giveaway.

“We just gradually increased. Our numbers are higher in the winter because we have the seniors who come in,” she said.

Anyone who receives food stamps is eligible to receive commodity giveaways, Tucker said.

“We’re seeing new people in line because of the food stamps being cut because they truly don’t know how they’re supposed to survive on the cuts. The people that I personally know have been affected, there are people who are getting $16 to live on food stamps for a month. I don’t see how anybody can live on that,” she said.

Tucker said the U.S. Department of Agriculture provides $30,000 to $40,000 worth of commodities for the program.

The Three Square food program also contributes about another 13,000 pounds of food every month to the local food pantry, she said.

The USDA requires recipients to have an identification card and a local residence to patronize the food pantry, they can drive through every Wednesday between 9 a.m. and noon to pick up food. But Tucker said they don’t always check the requirements.

“If they lie, they have to deal with God, not me,” she said.

Tucker said there are a number of senior citizens living off Social Security who also need food assistance in the Pahrump community.

“Their incomes are below $1,000 (per month). They still have to pay rent and utilities on that. It’s tough. We see a lot of seniors when they lose a spouse because you go from two incomes down to one income,” she said.

But Tucker was full of thanks for the community support of the food program.

“We’ve always had the support of the community,” she said.