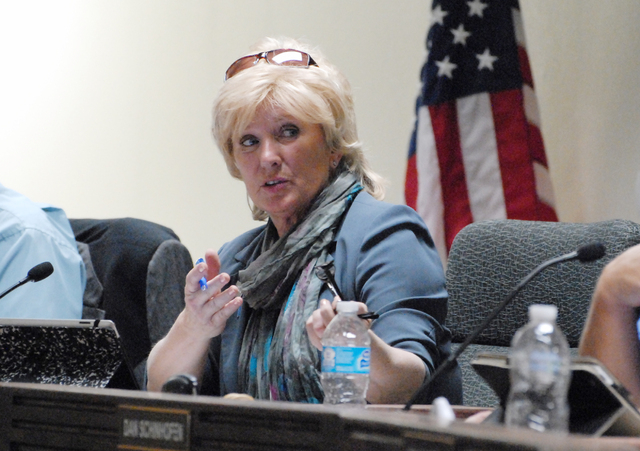 These questions stemmed from publication of a letter from the Beatty board in which they said that county officials had not been truthful in answering their questions regarding plans to close down sheriff’s dispatch in Beatty.

Wichman advised the board that when they write such a letter they should not be vague, but should “name names.”

“If you’re upset with me, pick up the phone. I’m not a teenager anymore — you can cuss at me, and we’ll get a lot done,” she added.

She said that Sheriff DeMeo had originally proposed consolidating dispatch four years ago, but “I don’t get to be privy to everything that’s going on unless it’s something the county commission is voting on.”

“Every year since I’ve been in this job we’ve had to find cuts of $1 million,” said Wichman, added that the sheriff had exceeded his budget every year, “which is illegal, by the way.”

Board member Erika Gerling said she had spoken on the phone with both the assistant sheriff and the sheriff, “and they said, “it’s the Commissioner’s plan.”

Wichman said that the commission can only set the amount of the sheriff’s budget, but that how he spends the money is up to him.

Gerling said that the change in dispatch was “something the whole community is scared about,” to which Wichman said it is largely “fear of the unknown.”

On another topic, a favorite of hers, Wichman said more people need to get involved in conservation districts and to contribute to the discussion about the possible transfer of public lands from federal to state control. She said there will be a workshop on the matter June 4 at 5:30 p.m. in the Tonopah Convention Center.

The balance of the Beatty Town Advisory Board meeting dealt with approving the town’s 2014-15 budget, choosing appliances for the Community Center kitchen remodel project, setting aside money for a float in the 4th of July parade, and approving payment of routine town vouchers.