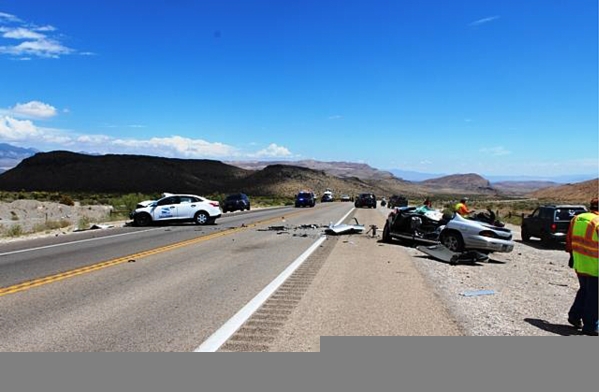 Safety upgrades are planned for a deadly stretch of road that connects the Pahrump Valley to Las Vegas.

The Nevada Department of Transportation said that a $30 million improvement project, which was announced in July 2014, goes out to bid next month, calling for the widening of a 5-mile section of state Route 160 between mile markers 11 and 16, from the state Route 159 interchange to just before Mountain Springs.

“The undertaking will widen the highway from two to four travel lanes, and flatten out the side slopes,” said NDOT Public Information Officer Tony Illia. “The resulting partially-divided asphalt highway will be significantly smoother and safer, accommodating passing around slower trucks and vehicles. Construction is expected to break ground this year, and finish by early 2017.”

The project will also add a median, shoulders and bicycle lanes on each side of the highway once complete.

In a five-year crash study, NDOT found that the stretch of road between mile marker 11 and mile marker 22 saw an average crash rate almost double the rate for the average NDOT maintained rural principal arterial.

There were 280 crashes that occurred on this section of Highway 160 for the five-year study period. Of those, 195 were non-collision (ran off the road) crashes.

On Sunday around mile marker 17, six miles west of the 159/160 interchange, a 24-year-old female driver traveling westbound in a Pontiac Bonneville attempted to pass slower vehicles, veering into the eastbound travel lane. As she attempted her pass, the Pontiac struck a Ford Focus traveling eastbound head-on, according to the Nevada Highway Patrol.

The accident resulted in the death of Patrick Denley, 61, from Henderson, who was seated in the front passenger seat of the Ford Focus. He was declared deceased at the scene. The 16-year-old driver of the Ford suffered minor injuries and was transported to University Medical Center in Las Vegas.

The female driver in the Pontiac sustained serious injuries and was also taken to UMC Trauma.

The accident shut down traffic in both directions for several hours Sunday. There have been several recent fatal crashes on the stretch.

In April, a motorcycle rider veered off the road near Mountain Springs, killing him on the scene. In December near mile marker 16, a fatal crash involving seven motorcycles and a passenger vehicle took the life of an 18-year-old North Las Vegas man and injuring several others.