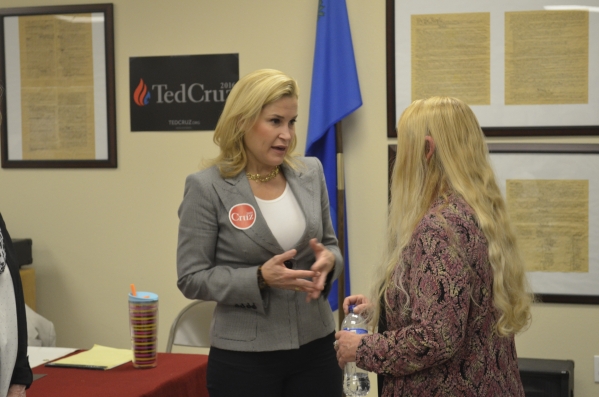 With the presidential election season in full swing, the wife of Republican nominee Ted Cruz and prominent advocate for his campaign, Heidi Cruz, made her first presidential campaign visit in Pahrump on Monday evening.

After a stop in Las Vegas, Heidi Cruz, who took an unpaid leave from her job at Goldman Sachs to support her husband’s presidential run, arrived at Nye County Republican Headquarters where she was greeted by a crowd of residents and a score of local officials.

Dressed in a pair of black slacks and a grey blazer with a sticker that featured her husband’s campaign logo, Cruz chatted with residents, took photos and shook hands before taking to the improvised stage where she outlined some of the key strategies of Ted Cruz’s program.

In a 30-minute speech, Heidi Cruz blasted some of the Obama’s moves, including the recent Iran nuclear deal and encouraged members of the audience to join a grassroots movement that Cruz’s campaign is building up from coast to coast as she continues her tour around the country.

“We have a president who is an apologist for freedom, (who) is an apologist for our leadership, and who wants to make everything fair,” she said. “And as Ted often reminds people in the campaign trail, we don’t want it to be fair, we want to win. And we must protect that.”

Ted Cruz, who campaigns on the promise of defending the 1st Amendment rights, lowering regulations and taxes, reinstating job growth and abolishing the IRS was able to surpass Jeb Bush — one of his chief rivals in a crowded GOP pool by $3 million last quarter with an average private donation of $68, Heidi Cruz said.

“I know that whenever we look at electing a president and any of our leaders, we aren’t going to agree on everything,” she said. “You won’t agree with Ted Cruz on every single issue, but if we agree on the things that are most important, and if can all conclude that he will protect our constitutional liberties, our individual liberties, as Americans, that he is the right man for the job.”

It’s not yet clear whether Ted Cruz also plans to visit Pahrump, but several officials said that a representative from another GOP nominee, Ben Carson’s camp, also plans to come to town.

“We are looking forward to bringing candidates to Nye County, to Pahrump, educate the voters, give the voters here in town the opportunity to engage and converse directly with candidates one-on-one, in these group settings,” said Leo Blundo, vice chairman of the Nye County Republican Central Committee. “I think everyone deserves that and we should have the same privileges as any other place here in Nevada. … I hope other candidates follow suit as well.”

Accompanied by occasional nods and bursts of applause, Cruz tried to energize the public by addressing some of the hot button issues such as economic growth, freedom of speech and touting her husband’s practical understanding of the 10th Amendment.

“Our free branches of government have ceased to function,” she said. “We have a president who is ruling by executive order on everything from the budget to immigration to health care. There’s a slow government takeover. Let no crisis go to waste, we will use it to take over the next industry; and they are largely unapologetic about it. … There’s a lot of issues, there’s a limited scope of what our federal government should be doing and the rest of the issues must be left to the states.”

Pahrump resident Linda Bobeck came to the event in support of Kentucky clerk Kim Davis. Bobeck was among several attendees who patiently waited in line to have a chance to exchange a few words with Heidi Cruz.

“No one knows about Pahrump until you live here,” she said. “It is nice that she came to our town that a lot of people don’t know about. They know (about) Las Vegas but they don’t about Pahrump, Nevada.”