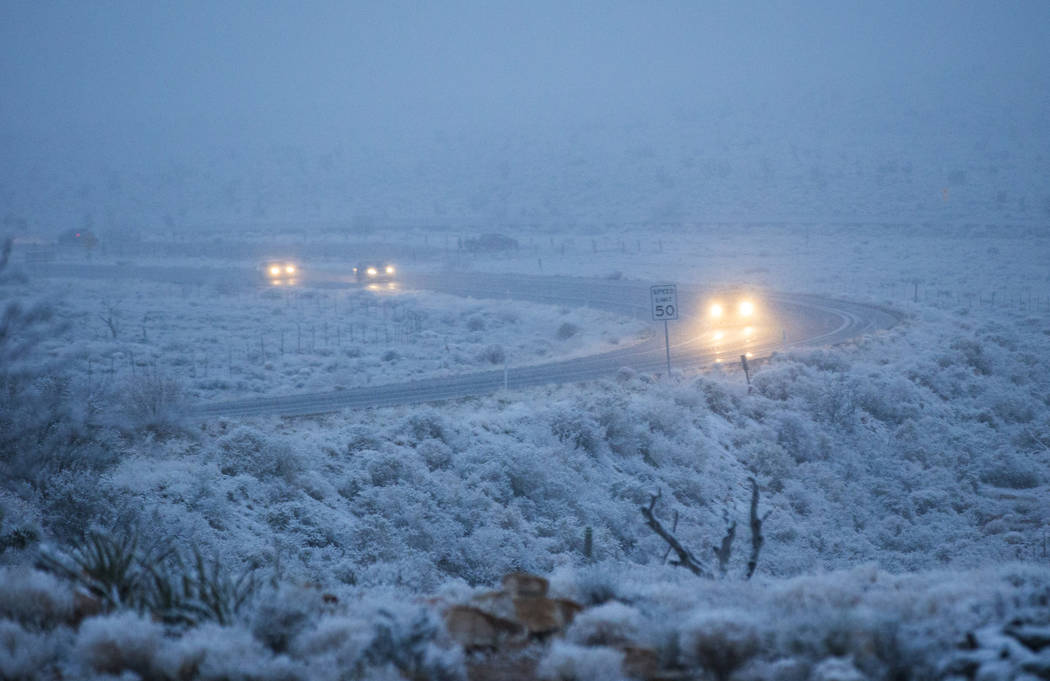 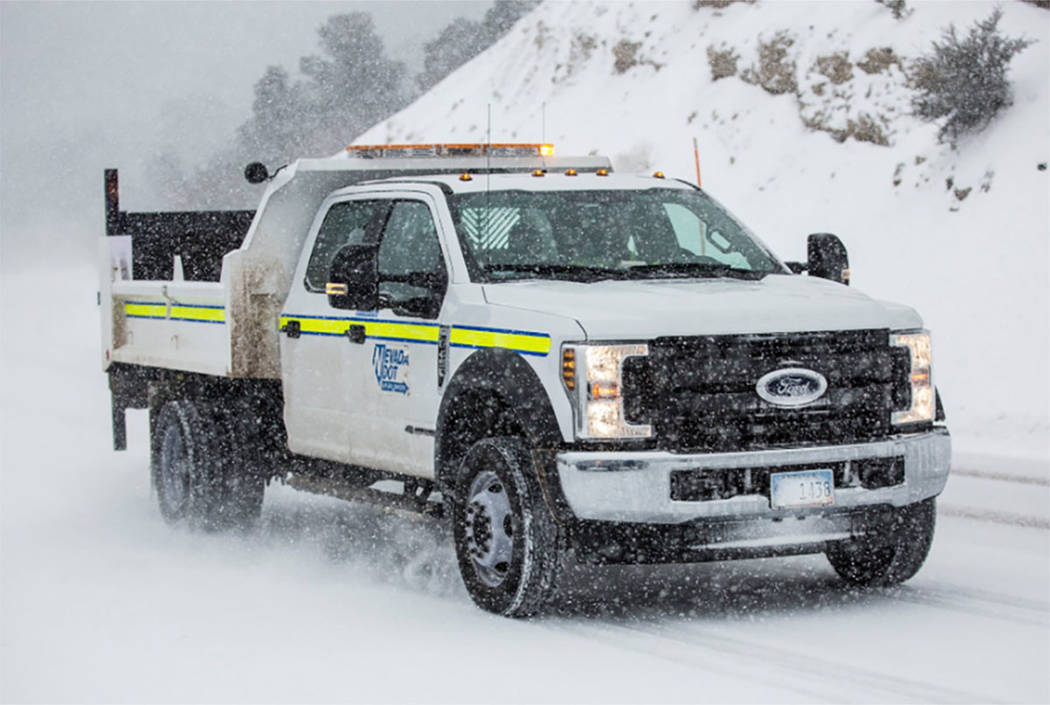 A vehicle from the Nevada Department of Transportation works in heavy snow to clear roads on Mount Charleston near Las Vegas on Wednesday, Feb. 20, 2019. (Benjamin Hager/Las Vegas Review-Journal) 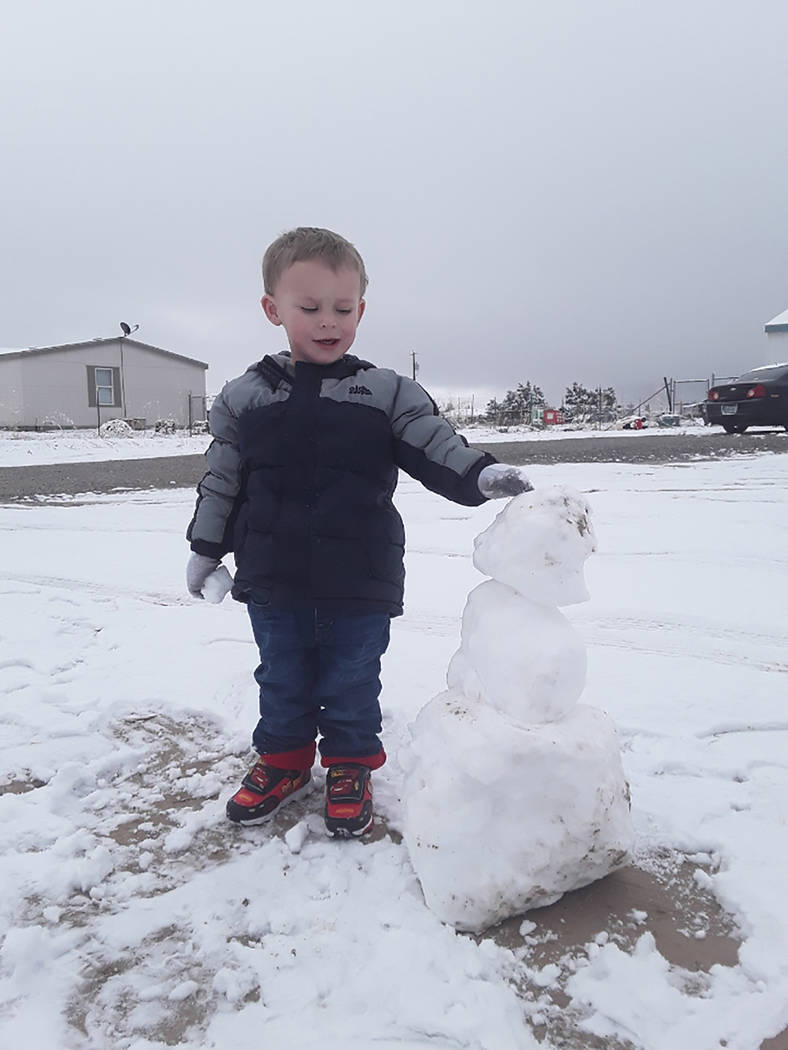 Selwyn Harris/Pahrump Valley Times Taylor Blankenship, 2, admires a snowman he and his father Tyler Blankenship created from Thursday's snowfall on the south end of the Pahrump Valley. The National Weather Service in Las Vegas issued a winter storm advisory for parts of Nye and Clark County this week. Some areas of Pahrump received more than an inch of snow from the system. 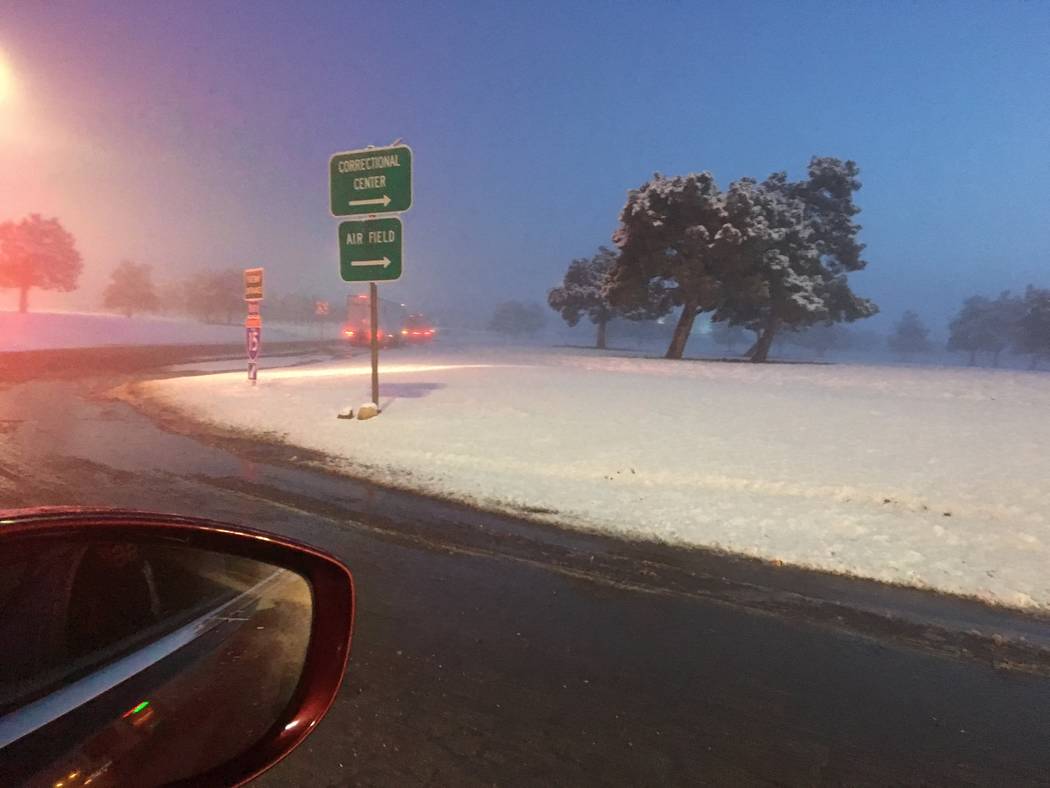 Suzanne Robbins/Special to the Pahrump Valley Times Suzanne Robbins from Pahrump was traveling with her daughter Nicole McLaughlin, owner of Off the Street, a Pahrump clothing store, between Los Angeles and Las Vegas on Las Vegas Boulevard South, adjacent to Interstate 15. The interstate was closed temporarily due to icy conditions and multiple accidents from St. Rose Parkway and Primm on Feb. 18. 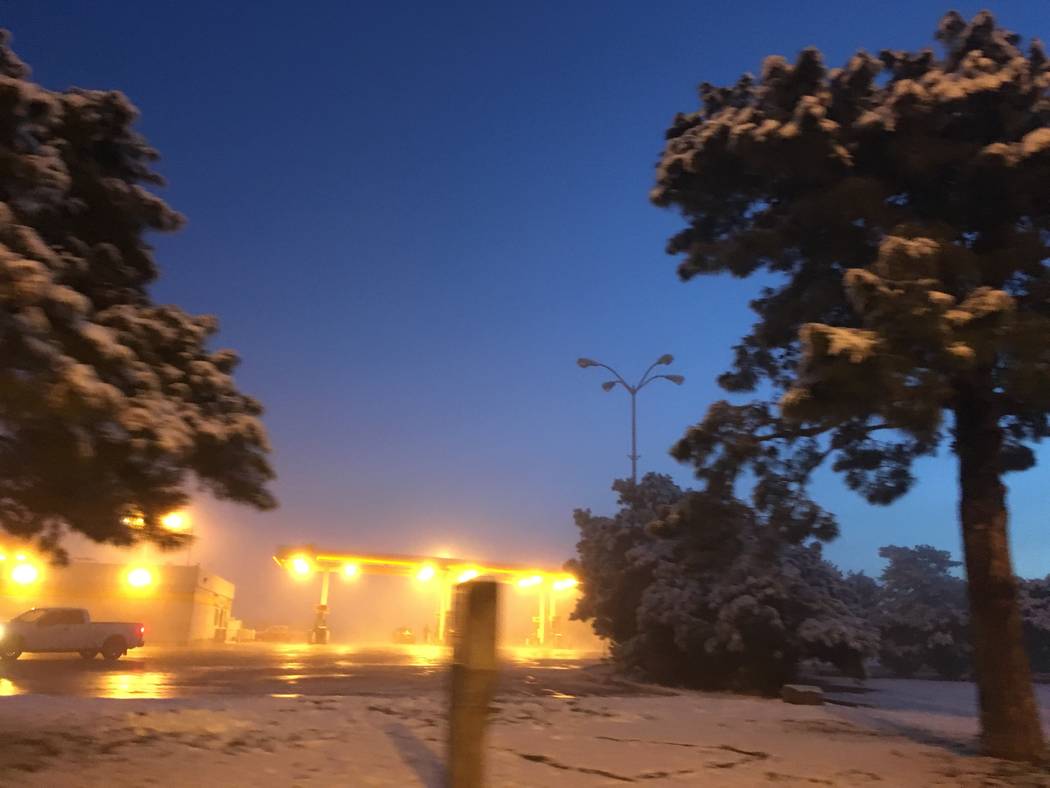 Suzanne Robbins/Special to the Pahrump Valley Times Pahrump residents Suzanne Robbins and Nicole McLaughlin were traveling along Las Vegas Boulevard South, near Jean, during winter weather that shut down Interstate 15 temporarily on Feb. 18, 2019. McLaughlin is the owner of Off the Street in Pahrump, a new clothing store.

Those who regularly commute to Las Vegas via Highway 160, be aware of snowy and icy conditions along the roadway, as snow flurries are expected this weekend, according to Meteorologist Jenn Varian from the National Weather Service in Las Vegas.

This week, the agency issued winter storm warnings for parts of Clark County and surrounding areas, where parts of Pahrump received more than an inch of snow on Thursday.

Today’s forecast calls for sunny skies with a daytime high of 48 degrees.

“As far as other surrounding areas, Lincoln County, Caliente and Pioche, they are expecting accumulations of 4 to 8 inches of snow, between noontime Wednesday and 4 a.m. Friday,” Varian said.

“Higher amounts are possible with upward of a foot in far eastern Lincoln County in the Spring and Sheep range mountains. We are expecting 8 to 12 inches in those areas. Both of those areas have winter storm warnings out.”

Closer to home, Varian also said total snow accumulations of up to 4 to 8 inches are expected in Red Rock Canyon and Mountain Springs with winds gusting up to 35 miles per hour.

As such, roads in the Spring Mountains will be difficult to travel.

“Those will be Kyle Canyon, Lee Canyon, and Highway 160 near the Mountain Springs Summit,” she said. “As far as the major interstates and highways, Highway 95 and 93 will have heavy snow.”

Varian also offered up some advice for those who must travel in those areas.

“If you must travel, keep an extra flashlight, food, and water in case of an emergency,” she advised. “It’s obviously best to slow down and drive carefully. You don’t want to drive with your cruise control on during those times, and you want to be really alert. If possible, it would be advisable to have chains with you.”

In a news release this week, Nevada Highway Patrol officials also imparted a message for those who will be hitting the roads during the snowfall, as Highway 160 was shut down in both directions for roughly two hours Wednesday evening due to heavy snowfall.

“We remind everyone to increase following distances and decrease speeds, as following too closely is our number one cause for crashes in inclement weather,” the release stated.

“If there is any snow accumulation, make sure you clear the snow off your vehicle before driving, this helps with visibility and flying debris. NDOT has advised NHP that they have 250 tons of salt being stored at six locations around the valley with two plows ready to go, and two more on standby. Temperatures will be hovering near freezing so there’s a chance black ice may be present, black ice is nearly invisible and extremely hazardous to drive on.”

On a final note, Varian, meanwhile noted that the heavy snowfall in Red Rock Canyon and Mountain Springs is not necessarily uncommon during this time of year.

“It’s not typical, but it’s not all that rare,” she said. “It has happened a couple of times over the years. Of course it would best if you can avoid driving in those areas.”

On a final note, the Nye County School District delivered a weather-related message to parents, students, and staff, via its social media site regarding area school operations.

“We will conduct school and business normally in Pahrump today, Thursday, Feb. 21,” the message stated. “The snow will not impact transportation or instruction.”