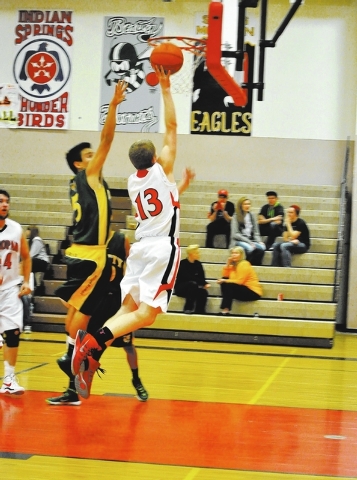 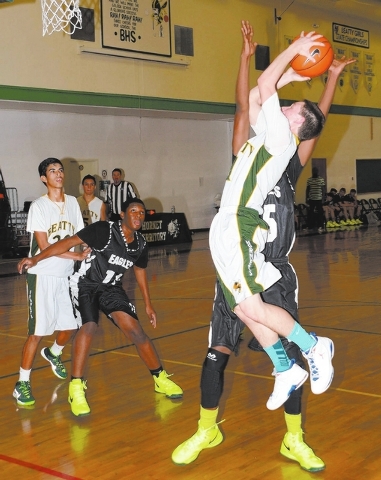 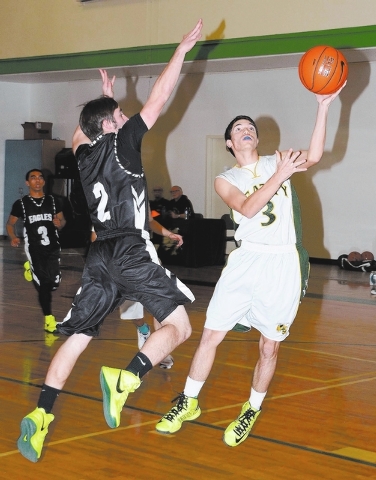 Beatty and Tonopah are always fun to watch and both teams are fierce rivals. Going into the game the Hornets just beat up World of Life on Friday. Word had battled Pahranagat Valley and beat them 42-32 the week before, but Word lost to the Hornets on Friday 61-56 in a solid performance by the Hornets.

This made for a dramatic game of huge importance for the Hornets on Saturday who were hoping to make a statement to the Division IV teams at Tonopah that they were the team to beat in Division IV.

The game was close, but Beatty came up short 55-45 against a strong Muckers defense and now that statement would have to be made against Spring Mountain on Tuesday. This game was too late to report on. Hornets Coach Joe Serrano said prior to the game that the league was wide open and with his loss to Tonopah this still remains the case.

“I told my team before Word of Life that we had 19 turnovers as a team in the first game we played against them and if we get less than 17 we will win the next game,” Serrano said. “In the game we just played, we had 17. In that game, we came out in a triangle and two in the second half in which we tried to take out their best two players. The game was tied 50-50 and went into overtime. We had a chance to win it with 13 seconds left, but turned it over. They had a chance and Jake Zamora took charge and we got the ball back with one second left. We beat them in overtime by five points.”

Serrano feels his team should have beaten Tonopah but he said the home town advantage helped the Muckers.

“Tonopah is not that good. We played in Tonopah. We did not play our best game either. My team was not tired. We ended up getting into foul trouble right away. Angel fouled out and Jake Zamora fouled out. We were in foul trouble from the get go. Things went bad from the beginning with me getting a technical at the start. Then Jake got one too,” Serrano explained.

Spring Mountain, the next Beatty opponent, Serrano feels can be beaten.

“We played them as our fifth game of the season and we killed ourselves. We had something like 32 turnovers. I think we will be all right against them. We are a lot better in that aspect of the game,” he said.

In fact, Beatty had 35 turnovers against Spring Mountain. Serrano says his team is basically a better team than they think they are.

“I think I got their attention with the World of Life game, and the team now believes we can actually do something. After that game, my team started to believe more in the system,” the coach said. “We have to get a win against Spring Mountain on Tuesday. This game will be big for us. We will see where we are at after Spring Mountain.”

It still remains too early to tell what type of team Pahranagat Valley is fielding this year. The Muckers will find out this Friday. PV was last year’s state champion.

Spring Mountain is another tough school who finished in the last two years in the state party at the end of the year, only to lose to PV.

The Hornets are now 1-1 in league play. After the Hornets take on Spring Mountain at home, they will then face Sandy Valley away.

When the dust settles, the league will know who the contenders will be. Spring Mountain has never won a state title in basketball and this year could be their year. Spring Mountain is coming off a huge victory against Indian Springs 59-22 in non-league action and then they barely beat Round Mountain 57-52.

The Muckers gave the Hornets their all after beating up on Round Mountain on Tuesday and Indian Springs (53-19) on Friday. The Muckers improve to 3-0 in league.

Muckers Coach Joe Westerlund was satisfied with his team’s performance against Beatty.

Westerlund felt to beat Beatty his team had to slow down the speed of the Hornets.

“We have Jason Carman who is our defensive stopper, and we have also brought up two freshmen, Vinny Bagarose and Brendan Eason who both possess high energy and quickness that helps to shut down the other teams’ quicker players,” Westerlund explained.

For the most part it worked, the Muckers slowed Beatty’s offensive machine and dominated the inside game.

Tyler Gallegos was the leading rebounder for the Muckers with 21 against the Hornets. He also led his team to the victory scoring 23 points. In addition, Connor Friel assumed the team’s command, played the point and kept the team calm throughout the game after the first quarter.

According to the Muckers head coach, the defense will be key to beat their next opponent Pahranagat Valley.

“To win against Alamo, our team has to continue playing strong in defense and try to take advantage of matchups during the game,” Westerlund said.

Despite Alamo’s first league loss against Word of Life, Westerlund did not want to be overconfident.

“I saw the score of the Alamo versus Word of Life game, but I don’t know about either team. I can only assume that Word of Life is a strong team,” he said.