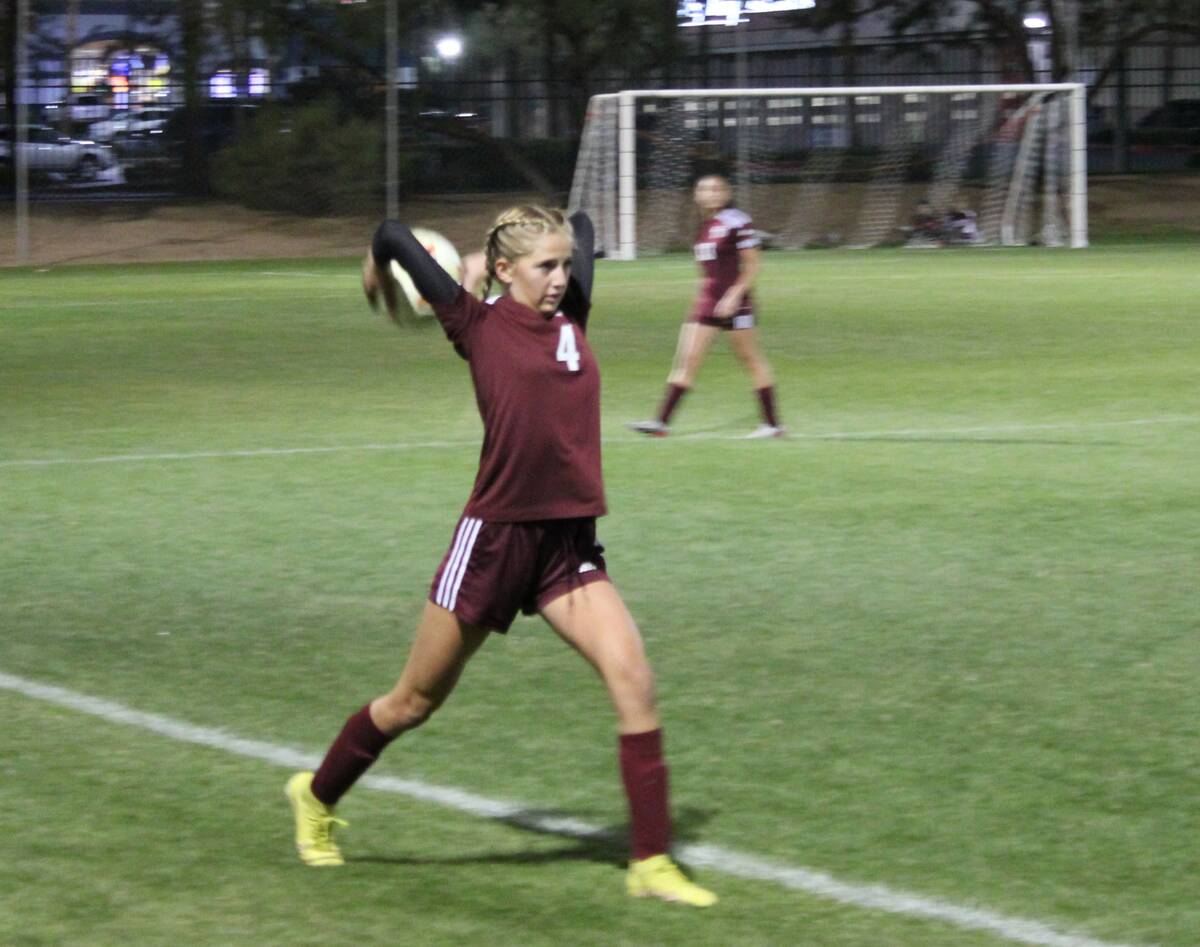 Danny Smyth/Pahrump Valley Times Sophomore midfielder Khylarann Park (4) throwing the ball in during the Trojans' 5-0 victory over the SLAM Nevada Bulls in the 3A southern regional semifinals on Wednesday, Nov 2, 2022. 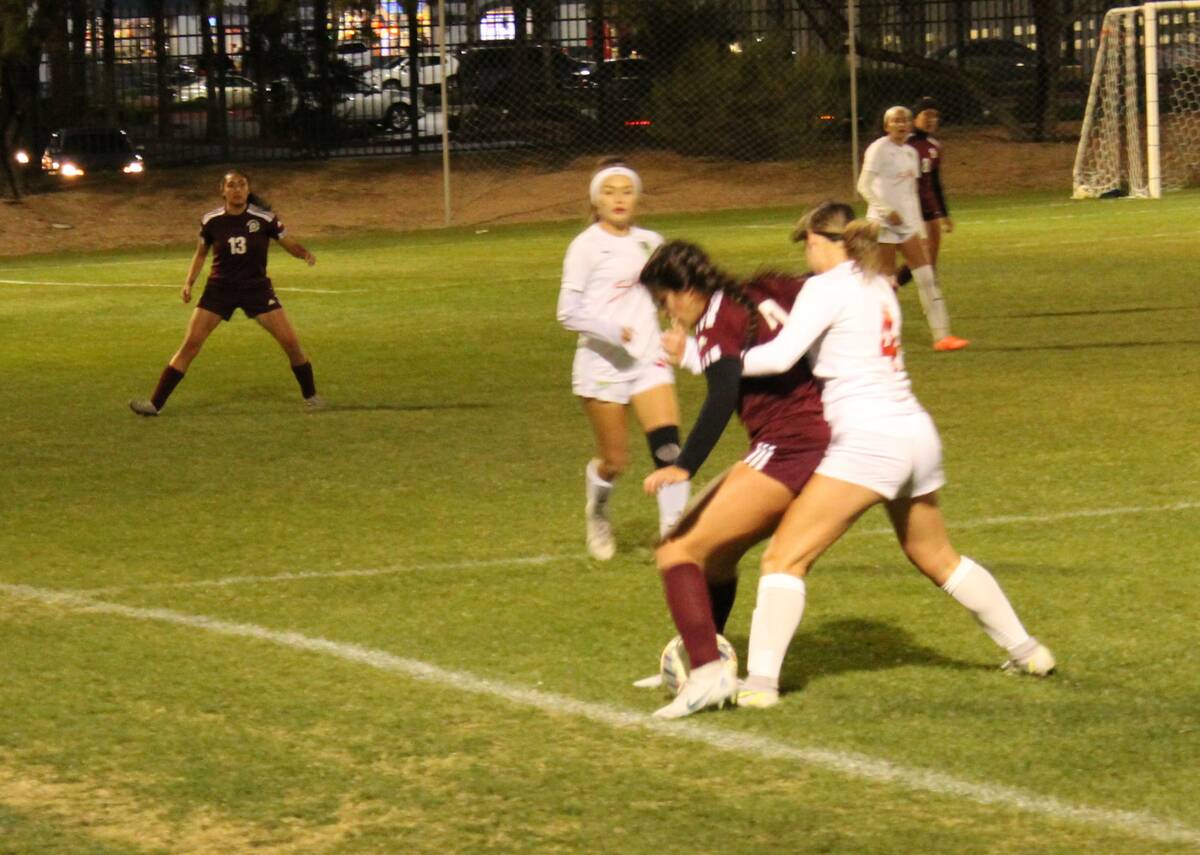 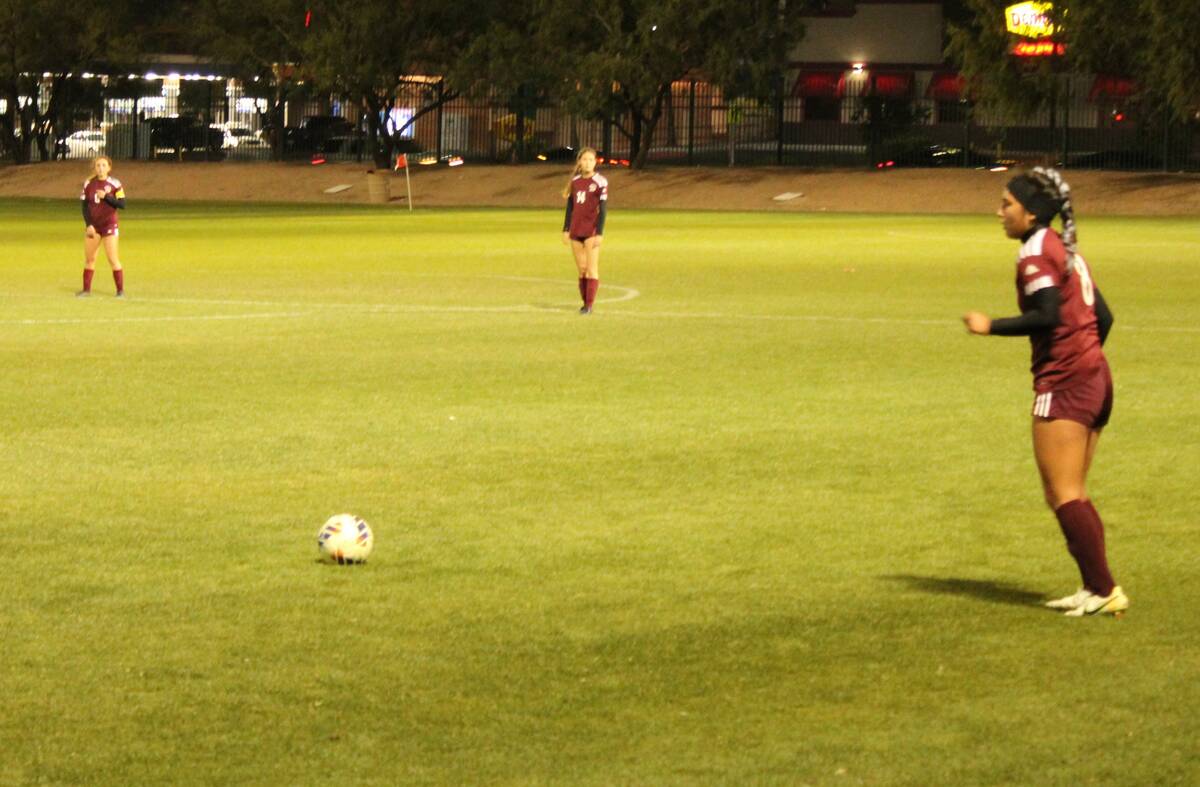 This was the third matchup of the season between these two schools. The teams tied in the first game, 3-3. Pahrump would win their game at home against SLAM, shutting them out 5-0.

Elements were certainly a factor on Wednesday night. Temperatures were in the low 50s throughout the game. Strong winds were making it feel even colder.

The Trojans’ offense got going much faster than their game on Monday.

“It feels really good,” head coach Julie Carrington said after Wednesday’s win. “It seemed to me, that if they were the underdog, they were doing much better. I was a little nervous going in, but my team, they pulled it all together and worked really well together. I was pretty happy about that.”

Junior forward Courtney VanHouse got the scoring started with two goals within the first 10 minutes.

She now has four goals in two games of the regional tournament.

Her first goal came from a pass across the penalty box by senior forward Adryanna Avena. VanHouse’s second goal came on a miscue by the SLAM goalkeeper.

The goalie mis-kicked the ball, causing it to pop straight up into the air. VanHouse headed the ball over the keeper and into the back of the net to give the Trojans a 2-0 score.

Just minutes later, there was another devastating miscue by the Bulls’ defense.

As the ball was approaching a SLAM defender, she attempted to pass the ball back to the goalie, who was running toward the ball not expecting a pass. The ball rolled past the goalie and into the net for another goal.

The Lady Trojans took a 3-0 lead into halftime.

In addition to their offense clicking faster, Pahrump Valley’s defense played fast and strong the whole night. Junior Grace Miller started at left back instead of her normal position at midfield.

Carrington was proud of the way Miller stepped into the position.

“Grace does amazing at defense,” Carrington said. “She really pulled it together, I was proud of her. It makes me a lot less stressed going into the next game knowing that I have somebody covering that position that, sadly, Jessica [Garcia] is not playing right now.”

Garcia is nursing an injury that she sustained against Boulder City near the end of the regular season.

Avena added two goals in the second half for the Trojans’ offense to increase their lead to 5-0.

With their win, Pahrump Valley will be heading to the 3A southern regional championship game this Saturday, Nov. 5, to take on the Virgin Valley Bulldogs.

The Trojans defeated the Bulldogs 1-0 in their lone matchup this season.

Virgin Valley got to the championship game by defeating the Boulder City Eagles 2-1 on Wednesday night. The two teams were tied at 1 until the Bulldogs scored with under 10 minutes left in the game.

In addition to getting a spot in the regional championship game, the Trojans also secured a spot in the 3A state tournament next week.

The regional championship is scheduled to begin at noon.