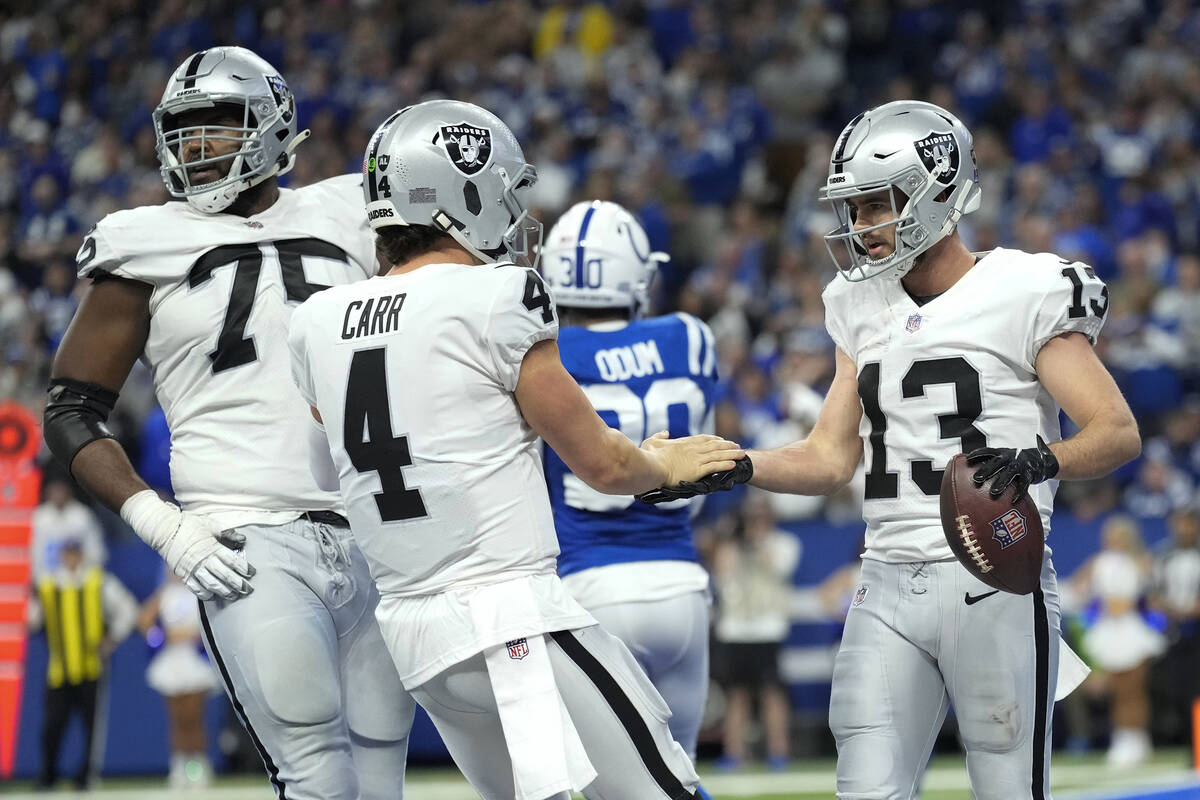 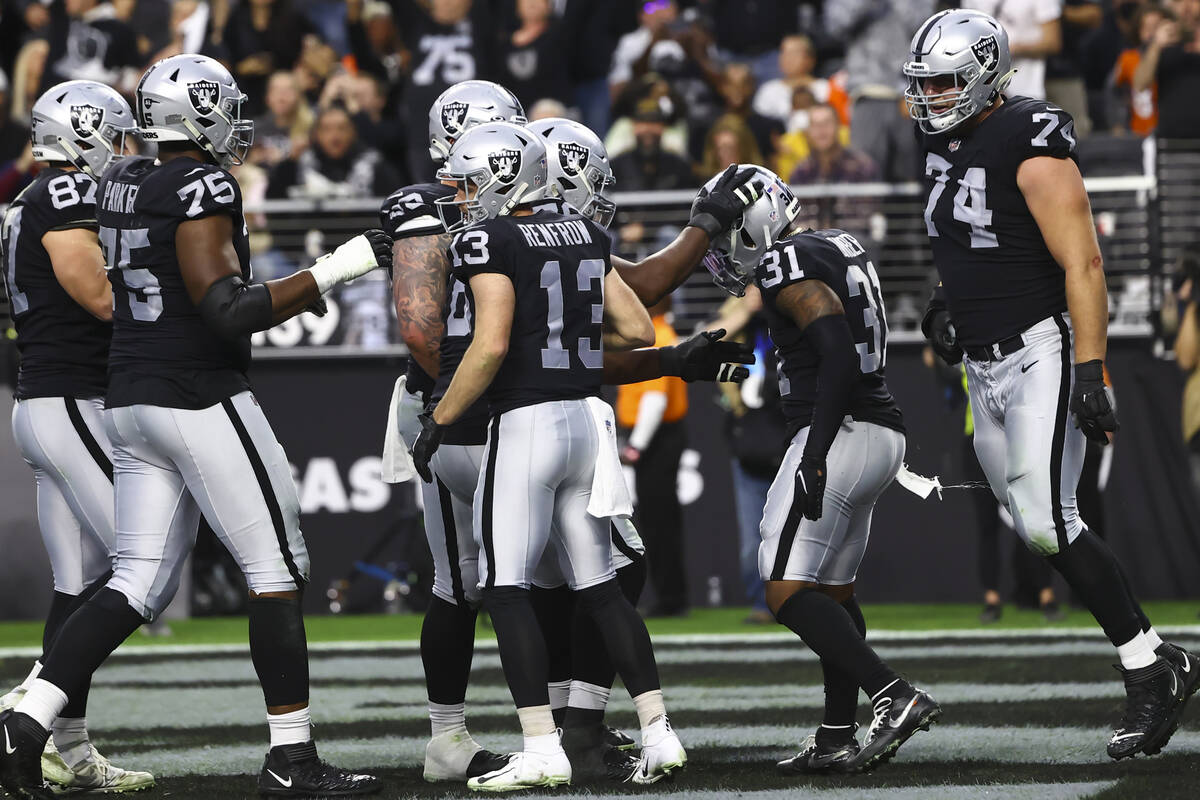 Raiders running back Peyton Barber (31) celebrates his touchdown against the Denver Broncos with teammates during the second half of an NFL football game at Allegiant Stadium in Las Vegas on Sunday, Dec. 26, 2021. (Chase Stevens/Las Vegas Review-Journal) @csstevensphoto

The Las Vegas Raiders defeated the Indianapolis Colts 23-20 in a must-win game on Sunday afternoon at Lucas Oil Stadium.

This was the third consecutive win for the Raiders, something they hadn’t done since their three-game winning streak to start the season.

“I just want to start off by saying how excited we are and how proud we are of our football team and the way in which they competed out there today,” head coach Rich Bisaccia said of the team’s performance. “Regardless of the ups and downs during the game, I think you can see the energy from all of the players, whether it was on the offensive side or the defensive side, and just pulling for their brothers and never took a step back the entire game.”

When their season looked finished going into their week 15 matchup with the Browns, Las Vegas was able to defy the odds and turn their season around. They now have a home game this Sunday with a shot at the playoffs on the line.

Last Monday, multiple big time defenders for the Raiders tested positive for the coronavirus. Their game status looked in jeopardy. However, when the Center for Disease Control and Prevention came out with their new guidelines of only quarantining for five days, the NFL decided to adopt their new guidelines.

Because of the new guidelines, all of the Raiders who had previously tested positive, along with a few of the Colts that tested positive, including starting quarterback Carson Wentz, were all able to play on Sunday.

Las Vegas got off to a great start on Sunday. They drove the ball down the field at will, getting any and everything they wanted, whether it was with passing or with running.

Quarterback Derek Carr went a perfect 5-for-5 with 40 yards. He finished the day completing 24 of his 31 pass attempts and threw for 255 yards with one touchdown and two interceptions.

The Raiders went into the locker room with a 13-10 halftime lead. The only touchdown of the half for the Colts was a 1-yard rushing touchdown by Jonathan Taylor with one second left on the clock.

Taylor had his fourth consecutive game with over 100 rushing yards. He finished with 108 yards on 20 attempts.

The Colts took the momentum they built from the end of the first half and carried it over to their first drive of the second half.

Indianapolis took the lead on their first drive of the second half when Wentz escaped the pressure by the Raiders’ defensive line and heaved a pass 45 yards down the field. The ball was tipped into the air after two Las Vegas defenders and an Indianapolis receiver all collided while going for the ball, which eventually ended up in the hands of T.Y. Hilton for the touchdown.

The rest of the third quarter would remain scoreless and the Raiders headed into the fourth quarter needing to make a comeback or their season was likely over.

At the start of the fourth, Las Vegas was driving down the field. A 42-yard pass from Carr to his top target of the day, Zay Jones, put the Raiders in prime scoring position.

“The opportunity just came for me,” Jones said of his performance. “Just trying to seize it, seize the most of it. That’s what happened tonight. But a credit to the guys around me because they make it possible for me to have a night like tonight. Complete team effort. I’m excited, it was a fantastic night for myself and for this team, and especially for our fans, too, because they’ve been through a lot as well.”

Four plays later, the Raiders found the end zone on a must-have fourth down from the Indianapolis 11-yard line.

The ensuing drive by the Colts took the majority of the game clock that was remaining. They drove the ball down the field with a 14- play, 9:22 drive. The Colts capped off the drive with a game-tying 41-yard field goal by Michael Badgley.

On the Raiders’ next drive, they went 60 yards in 10 plays and ran out the remainder of the fourth quarter clock. Midway through the drive, Carr threw a pass to Renfrow that originally went for a 48-yard touchdown.

However, because Renfrow fell down after a Colts defender’s hand brushed his foot during the catch, the play was ruled dead and the touchdown was reversed to just being a 24-yard catch by Renfrow.

“I saw Hunter and he stayed with me, just like he did on his touchdown,” Carr said of the play that was called back. “He kept running and made a heck of a catch and, uh, they touched his shoe, which actually ended up helping us. Then they had to use their timeouts, so it was actually a good thing.”

With this win, the Raiders are now tied with the Los Angeles Chargers for the last remaining playoff spot in the AFC Conference. The Chargers travel to Las Vegas this weekend for a winner-take-all game being held at Allegiant Stadium. The winner goes to the playoffs while the loser starts their offseason.