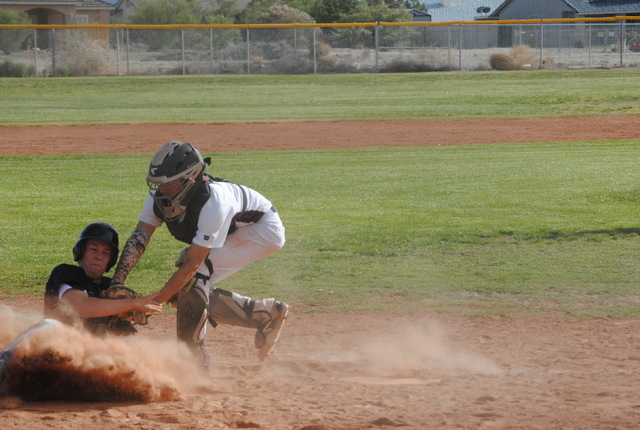 Senior Cruz Daddario of Faith Lutheran is one name the Trojans baseball team would rather forget.

Daddario hurled a two-hitter against them Thursday in the 10-2 beat down by the Crusaders (15-6 overall, 6-1 Sunset League) against Pahrump Valley.

After the loss, the Trojans (18-6-1, 5-2) dropped down to third place behind Spring Valley and Faith Lutheran.

Trojans Manager Brian Hayes said his team was outplayed in every aspect of the game.

“Pitching-wise, we walked five, they walked one,” the skipper said. “We got the first hitter out of every inning twice, they did it five times.”

“We knew the Faith pitcher was going to be around the plate early with the fastball so we had our kids look for the fastball early in the count and be aggressive,” Hayes said. “It didn’t quite work in our favor as we were three up and three down for the first five innings.”

Hayes believes that to beat Faith Lutheran, your team has to make less mistakes than them, playing a close to perfect game, and his team didn’t do that.

“Faith Lutheran is a team that isn’t going to give you much so you have to earn everything,” he said. “We didn’t earn much.”

Unlike the Trojans bats, Faith Lutheran hitters were not cold. The Crusaders had 11 hits and three doubles off of two pitchers, Eduardo Gonzalez and Shelton Cajudoy.

Gonzalez was the pitcher of record for Pahrump, pitching 6 innings, allowing 9 hits.

He had three strikeouts, walked five batters and gave up 9 runs.

Josh Mortensen was named the player of the game for going 2-for-3 and a run.

The Trojans defense had three errors that game.