Kim Dilger/Special to the Pahrump Valley Times Participants in the Firecracker Open after the horseshoes tournament wrapped up July 5 at Petrack Park in Pahrump. 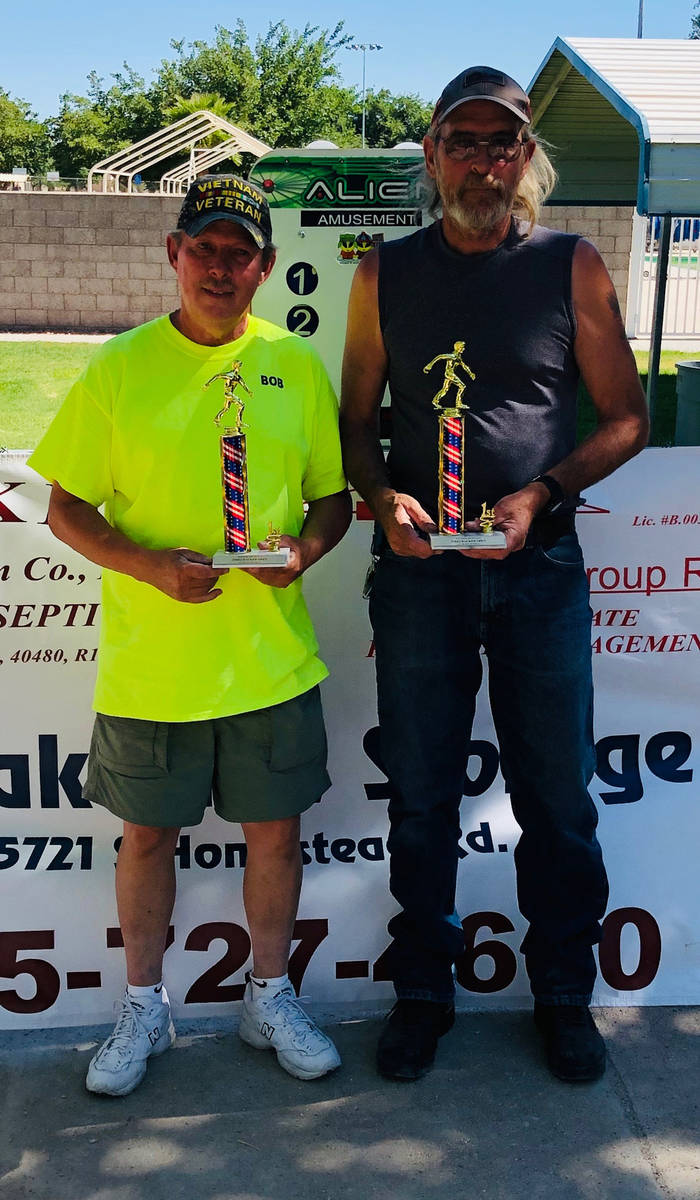 Kim Dilger/Special to the Pahrump Valley Times Bob Swain, left, and Russ Jacobs won all 10 of their games to capture first place in the Firecracker Open on July 5 in Pahrump. 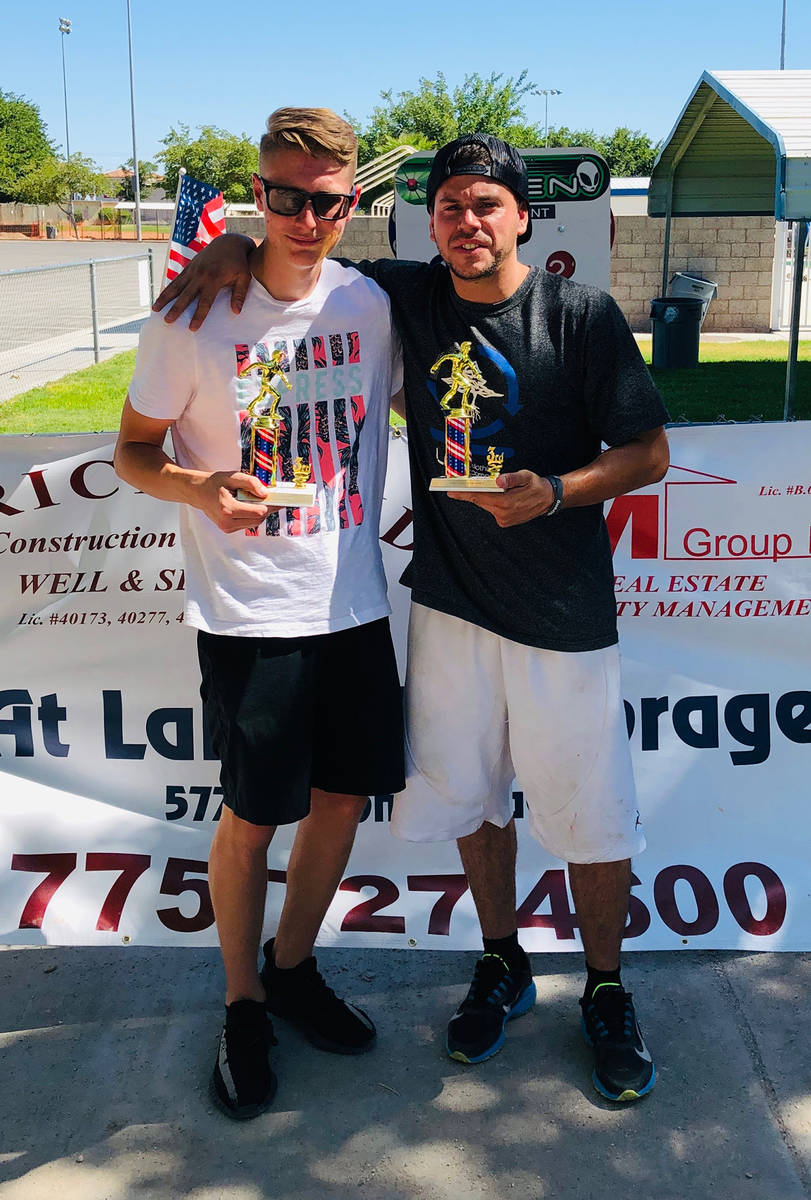 Kim Dilger/Special to the Pahrump Valley Times Kasey Dilger, left, and Willy Zuloaga finished 7-3 at the Firecracker Open horseshoes tournament and took third on a tiebreaker on July 5 at Petrack Park in Pahrump. 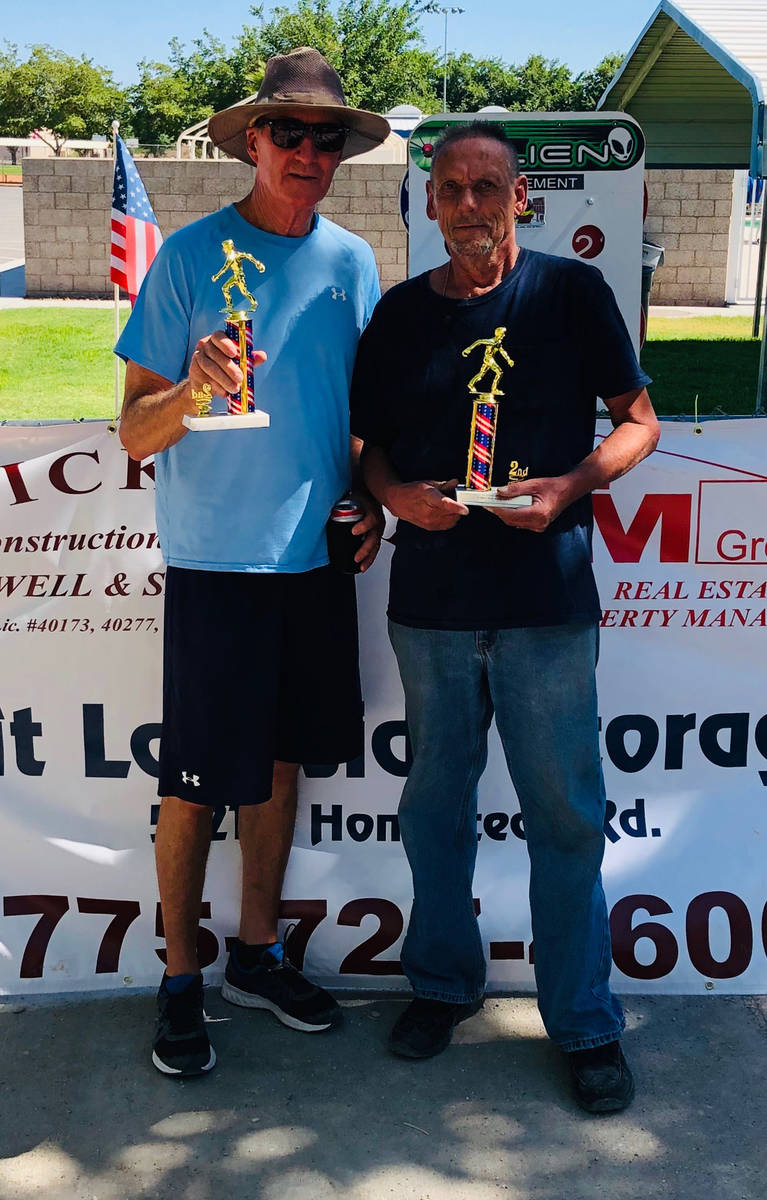 Kim Dilger/Special to the Pahrump Valley Times Dan Dunn, left, and John Pickard went 8-2 during the Firecracker Open on July 5 in Pahrump to take second place in the horseshoes tournament.

Class B champ Joseph Kalache, also pitching with a zero handicap, also won despite not leading his division in points. Kalache used 68 ringers, 20 more than runner-up James Hatch, to go 5-1, losing only to Dave Barefield. Hatch and Mike Nicosia each went 4-2, with Hatch breaking the tie on points, 218-213.

Lathan Dilger is the president of both groups, which didn’t help at the Firecracker Open; he and brother Gary combined to go 0-10 in the event. Dan Dunn and John Pickard finished the tournament 8-2 to place second, while Kasey Dilger and Willy Zuloaga won a tiebreaker to take third over Steve Lopez and Jefferson Counts after each pair went 7-3.

Dilger has plans for a large nonsanctioned tournament later this year.