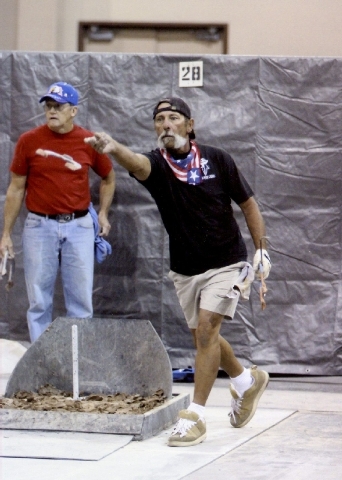 The tournament finished on Aug. 3 and over 1,500 horseshoe pitchers came from all over the country to participate. Only four of those from Nevada finished in the top six of their respective classes.

Four pitchers from Pahrump went along with two from Tonopah. Only two of those people received trophies.

Frank Blazek from Tonopah came home with a first in his class.

Dok Hembree came home with a second place in his class.

At the world tournament, Hembree went from tenth place to second in three days of competition.

“On the third day I was in first place, but lost my fourth game, which put me into a tie and a playoff. I threw nine ringers and he threw 10 to win. It was back and forth and he ended up beating me by eight points. I took second place in the D- Division which was 35-29 percent ringer throwers,” Hembree said.

According to Hembree, he threw 204 ringers out of 600 shoes. He said, “When you go to world the best of the best come to world. If you walk away with a second or first trophy, you did your job.”

Hembree enjoys the game because he said men or women can both enjoy it.

“It is something to do that does not cost you any money,” he said passionately. “You can take your family to play at Petrack Park. What I like is you always get teamed up with somebody you can win with so you never feel you are always going to lose because you are a low player. Come down to the park and we will teach you a bit. We help each other out and it does not matter if you win or lose. We throw on Tuesday nights at 7 p.m. We have plenty of shoes and it’s free.”

There is the Nevada NHPA state tournament on Aug. 24 and 25 at the Joe Friel Sports Complex. Anyone needing information on that call Tom McQueen 775-867-5926.