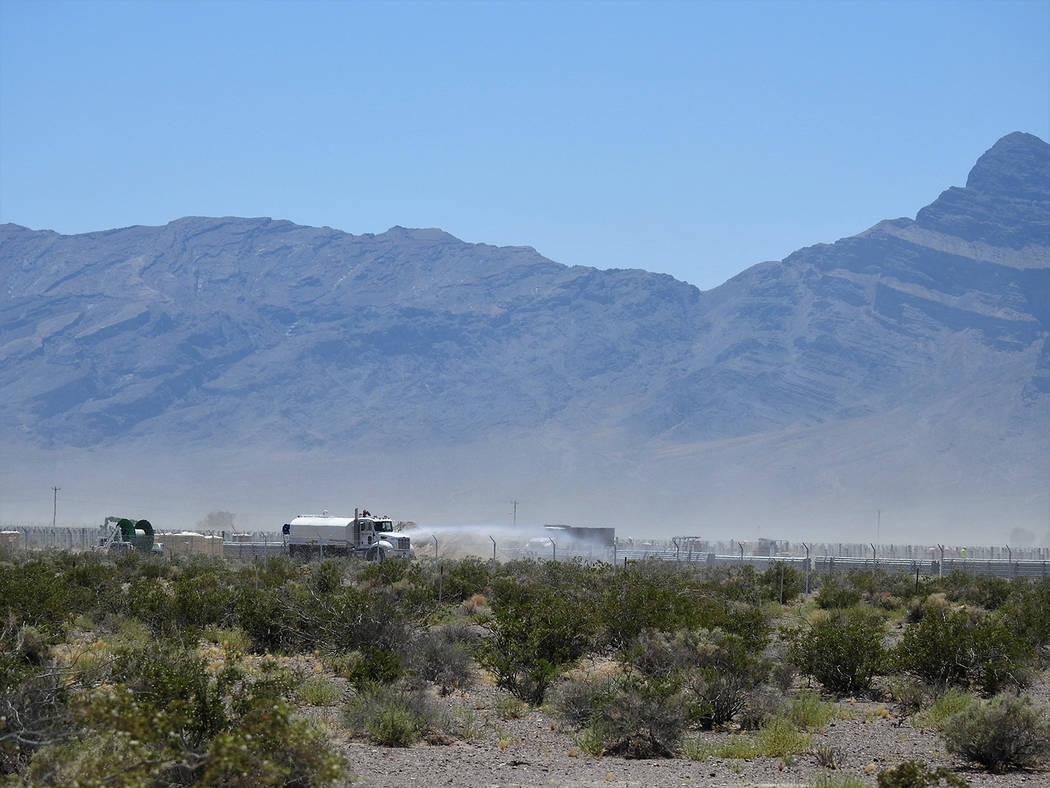 Kevin Emmerich/Basin and Range Watch The 100-megawatt Sunshine Valley is a photovoltaic project that will be located on private land in Amargosa Valley less than four miles from the California state line.

Kevin Emmerich told the Pahrump Valley Times that he had complained to the Nevada Division of Environmental Protection. In an email, he said that First Solar is “not mitigating the massive dust plumes they are creating from all the construction.”

“The dust is so bad that workers are wearing dust masks. But that can’t be safe for the people living next to the project,” Emmerich said.

He added that “the dust is a problem” every time he visits the site and said that the problem has been going on since June.

First Solar, a Tempe, Arizona-based company, is the largest manufacturer of photovoltaic modules in the nation. It started building its Sunshine Valley Solar Project in Amargosa Valley at the end of May.

Laura Abram, director of project execution and public affairs at First Solar, said that the company was contacted in August by a Nevada Division of Environmental Protection (NDEP) official regarding a dust complaint at the Sunshine Valley Solar Project.

“We reviewed our dust control practices with NDEP to satisfy their inquiry. No additional actions were required by NDEP with respect to dust control on the project site and no further inquiries have been made. First Solar and the Sunshine Valley Solar Project support and encourage open communication with our Amargosa Valley neighbors and NDEP, and we remain committed to minimizing construction impacts and ensuring compliance with all applicable laws,” Abram said in an email statement.

The “bureau “regularly conducts unannounced inspections of facilities throughout Nevada, and we follow up on all complaints filed with the agency,” Kremer said in an email.

First Solar had problems with the dust at its previous projects. According to the article in the Los Angeles Times, its Topaz Project in California sent 28 workers home with valley fever.

In 2017, nine construction workers got sick with valley fever at First Solar’s solar panel project in Monterey County, California after employers allowed lapses in training and safety precautions, according to an article published by the Center for Health Journalism.

In 2013, construction was halted at First Solar’s 230-megawatt Antelope Valley site because of air standards issues.

Kremer said that in accordance with Nevada’s air pollution control laws and regulations, dust-related to construction activities is required to be mitigated in order to prevent any potential impacts to public health and/or the environment.

The 100-megawatt Sunshine Valley is a photovoltaic project that will be located on private land in Amargosa Valley less than four miles from the California state line. The facility is set to produce approximately 302,000 megawatts of power per year, according to the company’s data.

First Solar entered into a development agreement with Nye County in 2014 to build an $80 million solar project on 745 acres near Anvil and Powerline roads. In December 2017, Nye County commissioners unanimously approved a partial sales and use and tax abatement application from the Nevada Governor’s Office of Energy.

First Solar’s fact sheet said that when operational, the project will generate enough solar energy to serve the needs of about 23,000 average homes per year, displacing approximately 178,000 metric tons of carbon dioxide annually, which is the equivalent of taking about 26,000 cars off the road.

The bureau issued the Class II Surface Area Disturbance Air Quality Operating Permit in November 2018. Though the permit is valid for five years, the Nevada Division of Environmental Protection has the authority to conduct on-site investigations, unannounced inspections, and to take enforcement action at any time if the facility is found to be noncompliant.

According to the company’s memo, “the project site is strategically located on former agricultural land with minimal environmental impacts and near an existing substation that can serve energy users in Nevada and California.”