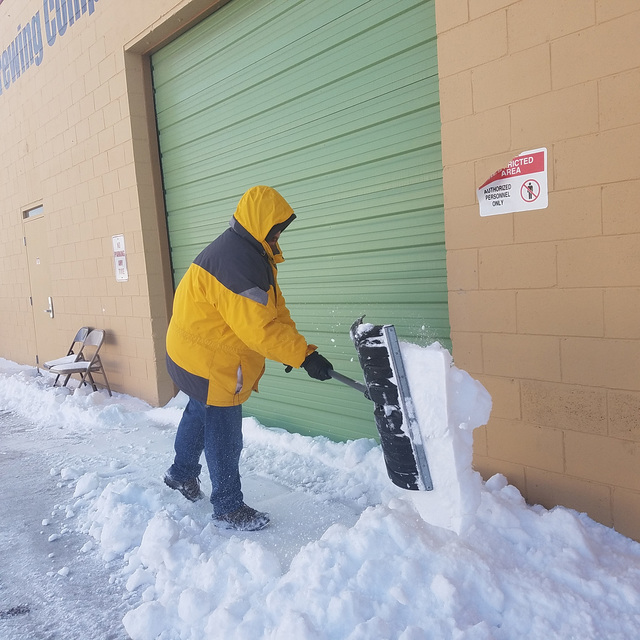 Brian Sachs is shown shoveling snow in Tonopah on Dec. 24 after a storm moved through, making for a white Christmas in town. Roads were snowy and slick in spots. The storm dropped 8 inches of snow. David Jacobs/Times-Bonanza & Goldfield News 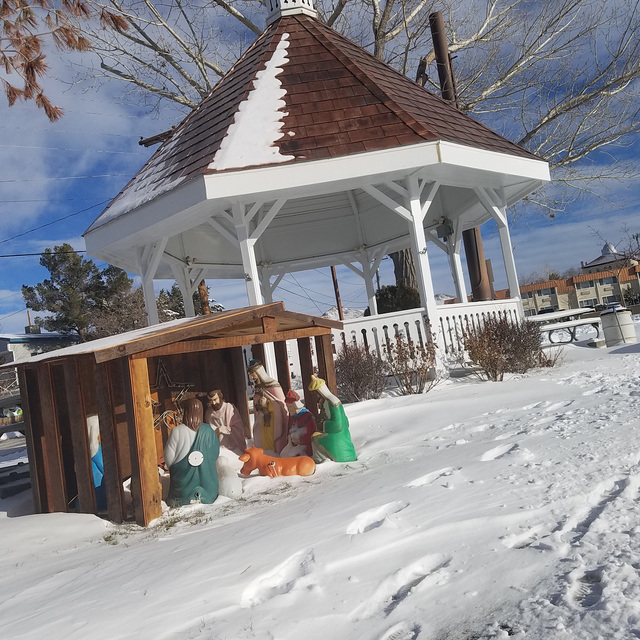 Snow, as shown in downtown Tonopah on Dec. 24, hours after the storm moved through, making for a white Christmas in town. The photo shows snow near a nativity scene and gazebo on Main Street near the Best Western Hi-Desert Inn. David Jacobs/Times-Bonanza & Goldfield News

Residents of Tonopah, Goldfield and Round Mountain were still digging out earlier this week from a winter storm that dumped heavy snow in the region, making for a white Christmas.

The storm left up to 8 inches of snow in parts of Tonopah on Dec. 24, the National Weather Service said. Though official measurements were not taken, significant amounts also fell in nearby communities such as Goldfield.

The snow made for slick roads and highways with vehicles going into snowbanks and ditches, keeping tow trucks busy. No serious injuries were reported.

At one point, chain controls were in place for a 27-mile stretch of U.S. Highway 6 from 27 miles north of Bishop, California to the Nevada state line, the California Highway Patrol said.

Though the sunshine came out after the storm, conditions were brisk. Overnight temperatures fell to the teens by Christmas morning and plummeted to 3 the morning of Dec. 26.

On Christmas afternoon, the weather service issued a Special Weather Statement involving cold for a broad part of region, including Tonopah and Round Mountain.

“Clearing skies and recent snowfall will allow overnight low temperatures to plummet,” the statement read. “Some locations in northern Nevada, will reach single-digit to double-digit below zero readings by Monday morning.”

The Stone Cabin area of northwestern Nye County recorded an overnight temperature of 9 degrees below zero on Dec. 26.

The Dec. 23-24 storm started as rain and helped break a 45-year-old record in Tonopah.

A record rainfall of 0.29 inches was measured at the Tonopah Airport on Dec. 23, breaking the mark for the date of 0.11 inches set on Dec. 23, 1971. The figures were compiled by the weather service.

The storm was the same one that hit the Reno-Lake Tahoe region and the Mammoth Mountain area.

“I would say the amount was a little bit higher than expected,” he said of Tonopah snow totals. “The whole area was under a Winter Weather Advisory for snow for amounts probably ranging from around 4 inches (in Tonopah), but certain areas got much more.”

With radar coverage for Tonopah limited during the winter, the weather service faced challenges in predicting how much snow would fall in the community. Adding to the challenge was the storm’s route across the Sierra Nevada.

“A lot of these (weather) fronts get caught up in the Sierra,” Barnhart said. “They can’t get through them (mountains) so they dive south and then they kind of regenerate once they get on the other side of them.”

“Basically, with the development of the (weather) system when it approaches California, it can do certain things,” he said. “And one thing it can do is split where energy dives to the south and tries to pass the Sierra through Southern Nevada. Sometimes it can form a surface low down there. The second piece comes across northern, and then we get that Sierra block.”

“They struggle sometimes to indicate whether that is going to happen, and you’re going to develop a decent surface low near Tonopah or south of Tonopah,” Barnhart added. “If it goes too far south, it can obviously miss everyone, including the Tonopah area, as it pushes eastward.”

The challenge leading up to the storm was to indicate if that was going to happen and trying not to “over-forecast” precipitation amounts, he said.

“The Sierra plays a huge role in what goes on,” Barnhart said. “It wasn’t a very strong surface low pressure that formed with this. It didn’t slow down and deepen as we’ve seen in some major winter storms in the past. But it did slow down enough to form a weak surface low here (Northern Nevada).”

“Another one formed in southern Idaho, which enhanced (the weather) here a little bit more than we expected,” he said Dec. 24. “Now another formed over in Utah, which is helping Ely, White Pine (County). The Great Basin National Park is getting hammered pretty well right now with heavy snow.”

When it came to snow in Tonopah, measurements at different locations can vary based on their elevation. “It will drop off probably significantly as you go toward the airport and then further southeast,” Barnhart said.

With the New Year’s holiday weekend approaching, the weather service was looking at the possibility of a cold front sweeping south in addition to winds.

“This is what we call an inside-slider,” Barnhart said. “Basically, it comes from northwest to southeast. It doesn’t hit the Sierra. It kind of slides southeast into the state. These typically don’t bring a lot of snow, and they don’t really hit Central Nevada too hard, either.”