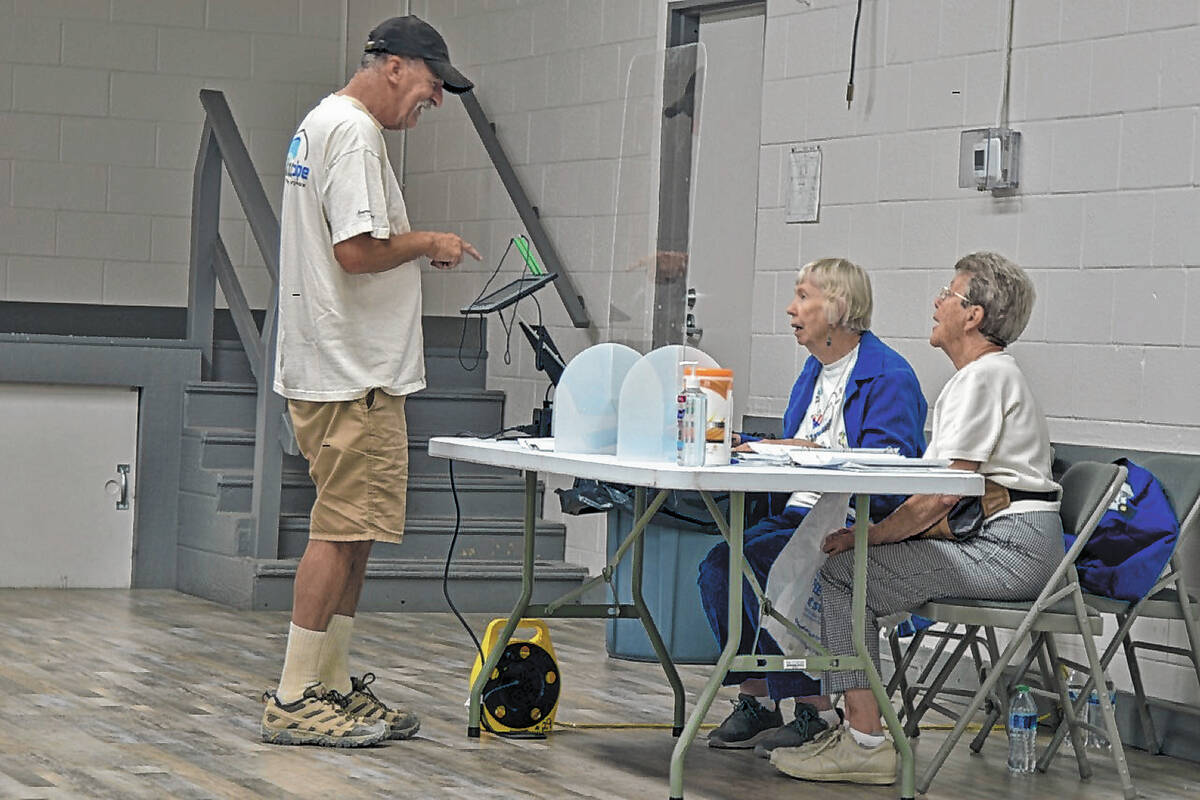 Inside the voting center of the Bob Ruud Community Center in Pahrump where a voter is checking in on Tuesday, May 31, 2022. (Jimmy Romo/Pahrump Valley Times) 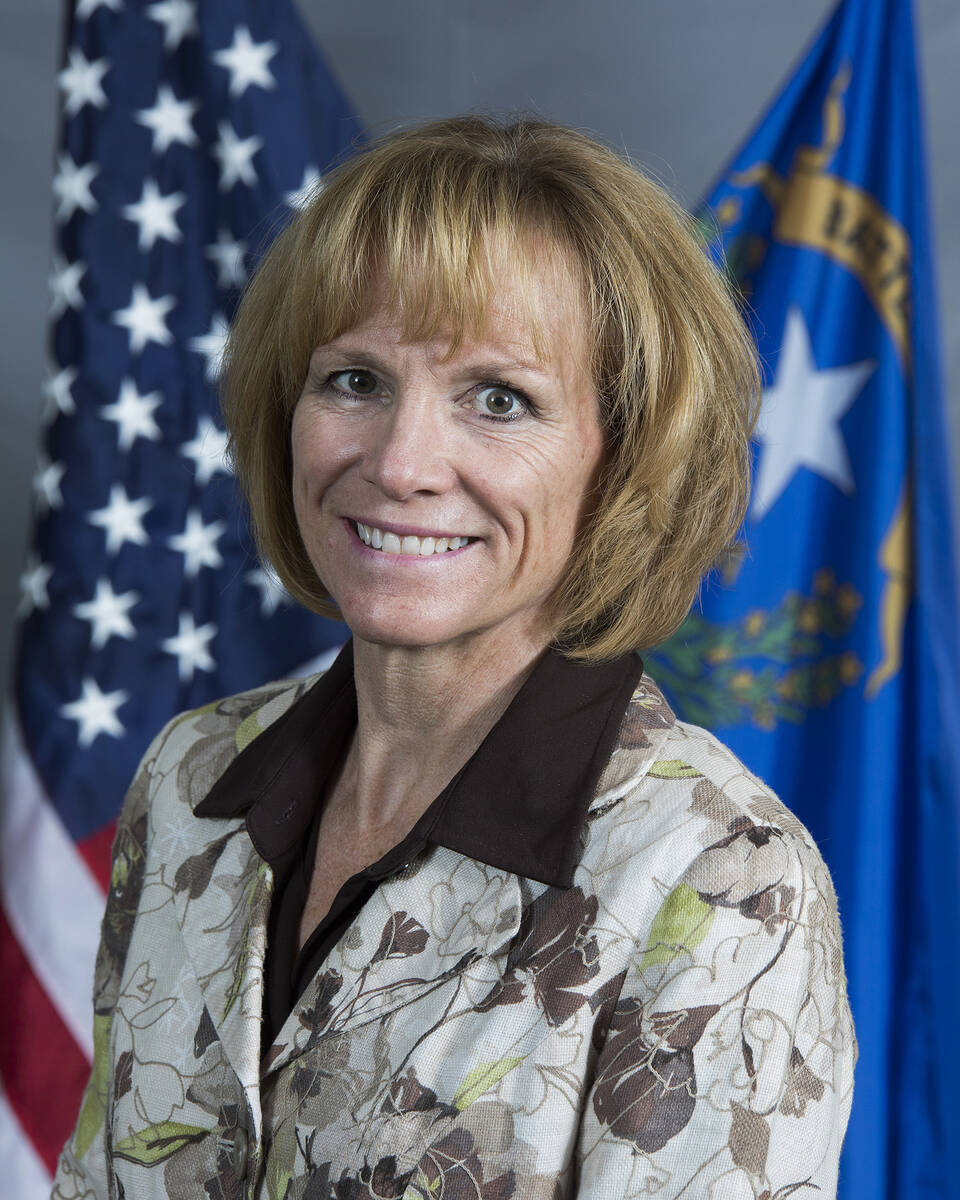 Nevertheless, on Tuesday, June 14, thousands of voters here are expected to cast ballots in the Nevada primary using them. Early primary voters were critical of the machines, which haven’t changed since being implemented in elections here in 2004.

While some voters here fear the chance of “cyber hacks,” electronic machines aren’t connected to the internet.

And there are multiple checks and balances that can tip a clerk off to any irregularities, said Nye County Clerk Sandra Merlino, a Republican who has overseen local elections for two decades.

Voting machines can only operate with certain enabled hardware, she said, and if tampered with, they won’t function.

“We’re very happy [as clerks] with the systems and how things work, with the double-checks, and the fact that workers aren’t giving the wrong ballots, because of the way systems are,” Merlino said. “They check for double votes because it’s electronic and the system just automatically tells you.”

Electronic machines simply record a voter’s choices, she said, then create a paper trail for clerks, who can then select a machine at random to verify if the tallies are accurate. Votes are kept on a USB drive and at the end of Election Day, the votes are uploaded to a database that allows officials to read and collect data, as well as review the results.

But that hasn’t stopped conspiracists from spreading counter-claims and pushing for alternative and more primitive forms of voting.

The push for paper ballot

At the Nye County Commission meeting on March 15, secretary of state candidate Jim Marchant recommended that commissioners push for a move to an all-paper ballot system, which he claimed was more secure.

“Electric systems have been shown repeatedly over a 25-year period to be completely insecurable and not legitimately certifiable,” Marchant said at the meeting, without providing evidence to his claims. “Which means that you cannot ensure that your constituents are able to vote using a fair and transparent election voting and tabulation system.”

On his campaign page, Marchant says that he lost his 2020 election bid because of voter fraud. He convinced county commissioners to push for an all-paper voting system, even though Nevada has had only seven cases of voter fraud in its history — and only one related to the 2020 election.

There have only been 1,357 proven instances of voter fraud in the U.S since the 1980s, according to the Heritage Foundation, which works to advance the principles of free enterprise, limited government and individual freedom.

Merlino ultimately refused recommendations from the commission to move to an all-paper voting system.

“I’m just sorry that people can’t lose gracefully,” she said of Marchant. “And I’m conservative but I still think people should learn how to lose.”

That means elections in Nye County will largely still be conducted by electronic machines for next week’s primary election — and voters won’t see a possibility of a change until at least November’s general election.

Merlino will retire this year, and one of three candidates will replace her as county clerk. All of them support a switch to paper ballots. Merlino suspects that even though many in Nye County want a paper-ballot system, legislation would be required in order to do that.

The problem with paper ballots

Merlino is critical of a move back to a paper-ballot system.

“I absolutely don’t agree with paper ballots and that’s one reason I’m retiring,” she said in a recent interview with the Pahrump Valley Times. “And I had paper ballots when I first got in office in 2000.”

Those paper ballots had to be scanned, she said, which was a lot of work. And that was back when Nye County had roughly 16,000 voters — a figure that has now grown to about 30,000 voters, according to Merlino.

“When you go back to paper ballots, it just opens it up with more errors,” she said.

They also create unnecessary delays in the tallying process. By law, election results must be counted and finalized in 10 days and sent to the county commission for its approval.

Merlino does not think that’s possible with paper ballots.

“I don’t know that there’s any way unless you have these people work 24 hours a day to have all the ballots counted within 10 days after the election,” Merlino said. “The general public, they just want to vote. They don’t want to stand in line. They want it to be easy. They want the results. They want their vote counted.”

With electronic machines, preliminary results for the primary election are expected to be posted on the Nye County Elections page at 7 p.m. next Tuesday.