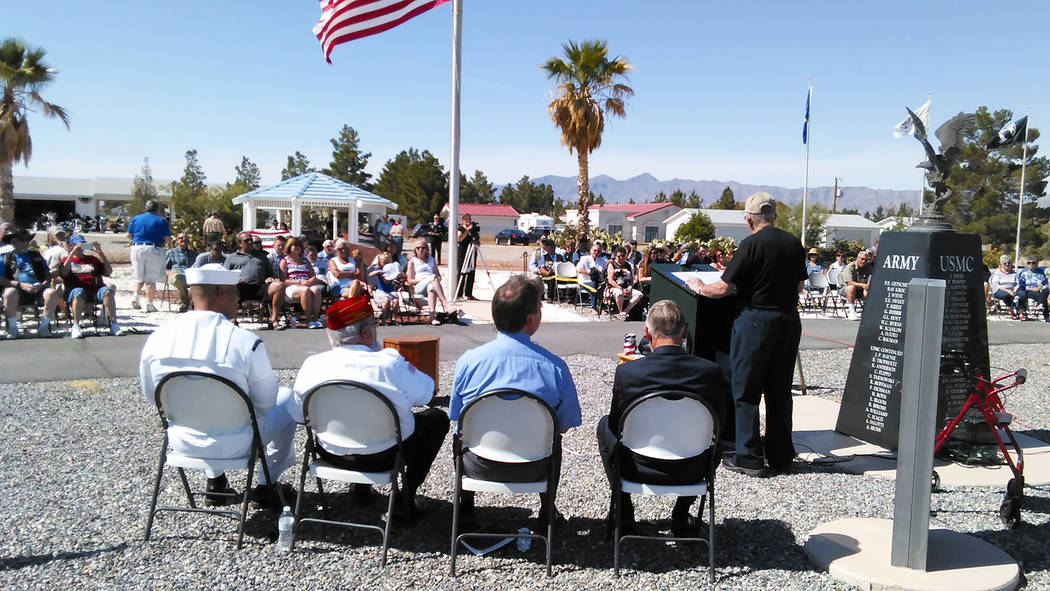 Selwyn Harris/Pahrump Valley Times Marine Corps Maj. Roger Chaput delivers remarks to residents and fellow veterans during Monday’s Memorial Day ceremony at G.G. Sweet Memorial Park. Chaput said Monday marked the 17th Memorial Day observation at the park. Chaput, who spent 20 years in the military, served with Sweet throughout the 1950’s. He said he and other organizers were quite proud to host Monday’s ceremony for the residents of Pahrump, in the memory of Sweet and all veterans who served. 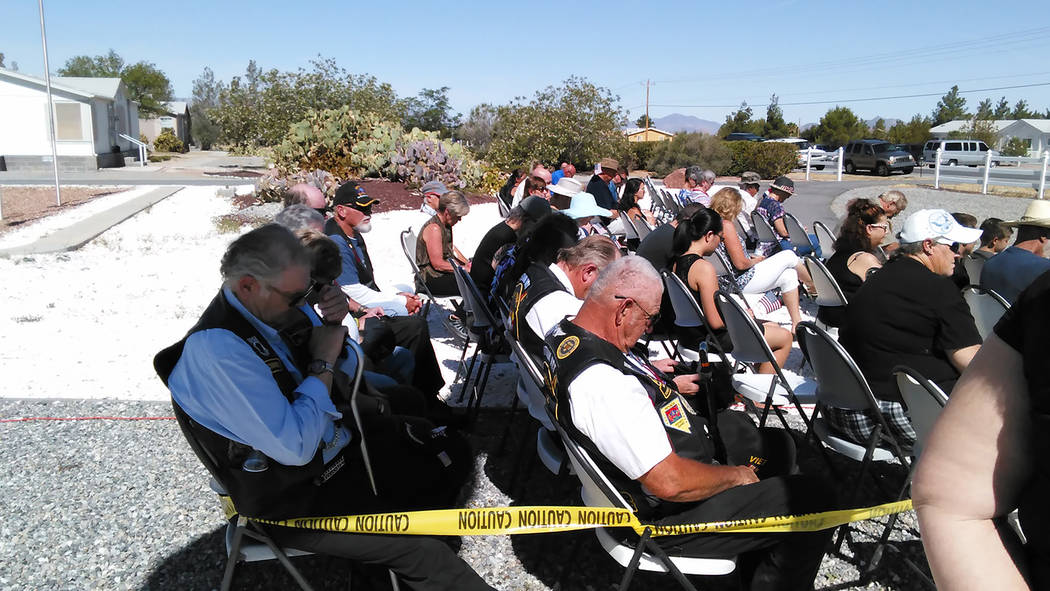 Selwyn Harris/Pahrump Valley Times Area veterans bow their heads during a prayer at Monday’s Memorial Day ceremony at G.G. Sweet Memorial Park on Gamebird Road. The observance drew more than 100 veterans and visitors to the park. Pahrump Valley High School’s JROTC program posted the “colors” during the beginning of the ceremony. Upward of 9,000 veterans residents reside in the Pahrump Valley.

Memorial Day, originally called Decoration Day, is a day of remembrance for military men and women who have died in service of the United States.

In the Pahrump area, at least two Memorial Day observances were scheduled to take place on Monday.

The popular ceremony at G.G. Sweet Memorial Park on Gamebird Road drew more than 100 veterans and visitors to the ceremony.

Chaput, who spent 20 years in the military, served with Sweet throughout the 1950s.

He said he and other organizers were quite proud to host Monday’s ceremony for the residents of Pahrump, in memory of Sweet and all veterans who served.

The major recalled his active duty time during the Korean War in 1950 and 1951.

“I was wounded in Korea, and did duty at sea all over the world, including the Philippines, Japan, Okinawa, as well as Vietnam,” he said. “When I was an enlisted man, I was on M-26 tanks in Korea. When I got commissioned, they put me in motor transport.

“Captain Sweet was a gun captain on the USS Nevada at Pearl Harbor,” Chaput said. “During combat, he was blown into the water where he damaged his hip pretty bad. He had been in infantry, but because of his hip, they put him in tanks. He took our unit to Korea in 1950 and ‘51. He joined the Marine Corps in 1938 and retired in 1958.”

Following Sweet’s military career, Chaput said he successfully pursued business opportunities where he did quite well for himself.

“He wound up owning several McDonald’s up in Minnesota, where he earned lots of money,” Chaput recalled. “During our time in the military, he asked our unit to do so many things that no one else would do. He felt he had an obligation to his men, so he built this park and dedicated it to his Marines. We open up this memorial park by appointment only.”

Resident Joseph De Guise enlisted in 1958 and later became a commissioned officer in the Marines.

“I’ve been pretty much everywhere,” De Guise said. “I was in during the entire Vietnam War and retired in 1979 at the Twenty-nine Palms Marine Base. I was a captain when I retired but I was enlisted for 12 years as a gunnery sergeant before I got commissioned.”

De Guise noted that he and his family have observed Memorial Day since he was a young boy.

“My mother and father were married on Memorial Day in 1944 up in Minnesota,” he said. “The grand marshal of the parade was Albert Wolfson, who was a drummer boy at Gettysburg. I met him in 1953 and he died in 1956. He was a remarkable man.”

De Guise said he will continue to visit the G.G. Sweet Memorial Park, off Gamebird Road, for years to come.

“I love G.G. Sweet’s Memorial Park and I’ve been coming here since it was built almost 20 years ago,” he said. “I knew Captain Sweet and he was a friend of mine but sadly he’s not with us anymore. I used to come out and take pictures here anytime he had a ceremony going because it’s a very beautiful park.”

A separate Memorial Day ceremony, however, was delayed by an administrative issue.

Roughly a dozen attendees visited the veterans’ section of the Chief Tecopa Cemetery on East Street for a 10 a.m., ceremony but the event was actually scheduled for Tuesday. The assemblage of veterans and residents gathered there Monday, were surprised to learn of the news as they waited for the ceremony to begin.

Vick also noted that May 30, was mandated more than 150 years ago as Memorial Day.

“The VFW has mandated to do it on Memorial Day because of General John A. Logan’s order,” Vick said. “General Logan was the original one that gave the order to do it during the Civil War, which turned into Memorial Day. We do it every year on May 30.”