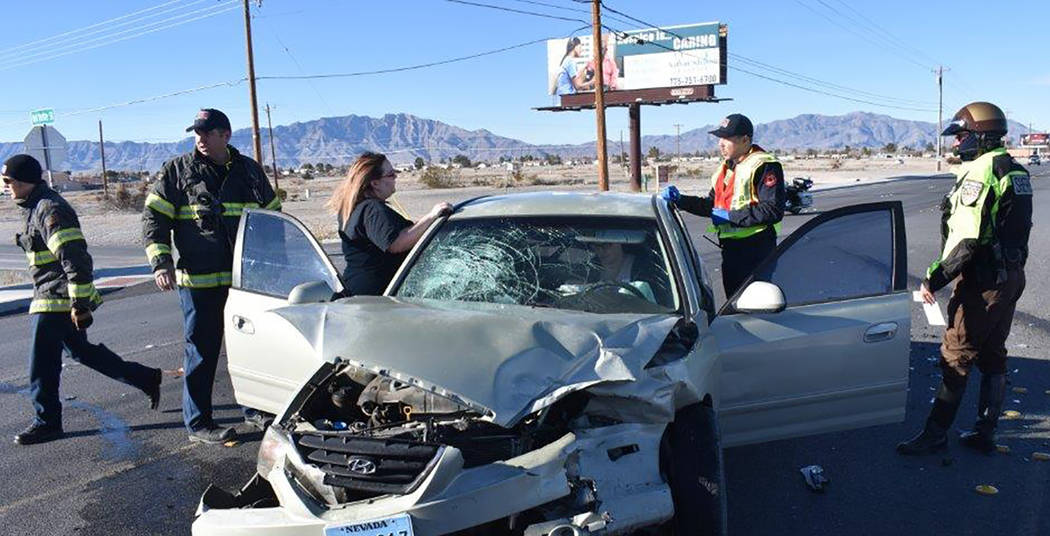 Special to the Pahrump Valley Times One person was transported to Desert View Hospital following a three-vehicle collision along Highway 372 at Red Butte Street, just before 9 a.m. on Tuesday Jan. 22. Two others involved in the crash declined medical transport. NHP is investigating the cause of the crash. 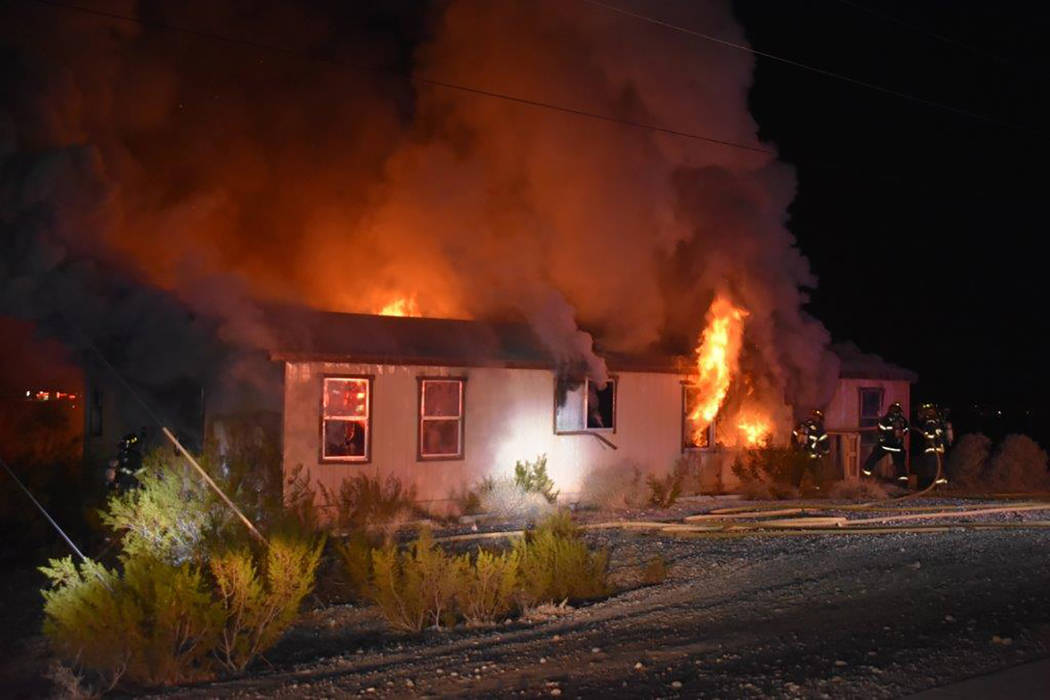 Special to the Pahrump Valley Times Pahrump fire crews responded to a structure fire along the 1400 block of Highway 160 just after 10:30 p.m. on Sunday Jan. 27. The long-vacant structure, once a business, was completely gutted by the blaze. A Deputy State Fire Marshal is investigating the cause of the suspicious fire.

At least one person was hospitalized following a vehicle fire along the 900 block of East Wilson Road.

“Upon arrival, we found a fifth-wheel trailer that was used as a fixed structure with fire showing on the interior in the area of the kitchen,” Lewis said. “Crews commenced an interior attack and quickly halted the forward progress of the fire, with no extension. There was one civilian injury and that person was transported to the local hospital for smoke inhalation. The cause of the fire is thought to be accidental in nature.”

The following day, area first responders were summoned to a motorcycle crash on Homestead Road near East Turner Boulevard just before 5:30 p.m.

“Crews arrived to find a single-vehicle accident as reported with the motorcyclist down,” Lewis said. “There was significant damage to the bike and the rider was found to have extremity injuries which warranted flight. That patient was transported from the scene to Mercy Air Base 21 and subsequently flown to UMC Trauma in Las Vegas.”

On Tuesday, Jan. 22, fire crews responded to a multi-vehicle collision in the area of Red Butte Street and Highway 372, just before 9 a.m.

“As we were responding, we were notified that one individual was entrapped within a vehicle,” Lewis noted. “It was then upgraded to a rescue assignment, adding additional resources. Crews arrived to find a three-vehicle accident where the initial impact involved an offset head-on collision where a third vehicle was also struck. One patient was extricated via a door-pop and was transported to Desert View Hospital. The other two individuals declined medical transport.”

Later that day, fire crews were dispatched for a mutual-aid assignment along Highway 127 in Shoshone at approximately 5:30 p.m.

“The initial report was a motorhome on fire,” Lewis said. “As we were responding, we were notified that the fire had broken off into two separate fires. The initial fire was a valid report and that windswept fire ultimately turned into a relatively large brush fire which endangered several structures. Crews arrived on location, where we responded with a water tender, two engines and two supervisors. Crews fought the fire for several hours.”

“Crews arrived to find a well-involved vacant structure, which had been used for commercial purposes but had been known to be vacant for an extended number of years,” Lewis said. “Crews commenced an exterior defensive attack to quickly control the fire and moved to a modified interior to do primary and secondary searches, but the structure was found to be vacant. The cause of the fire is thought to be suspect in nature. A deputy state fire marshal arrived on Monday morning and is investigating.”