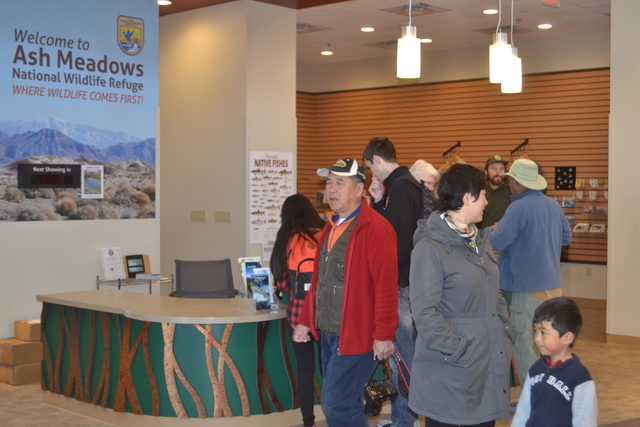 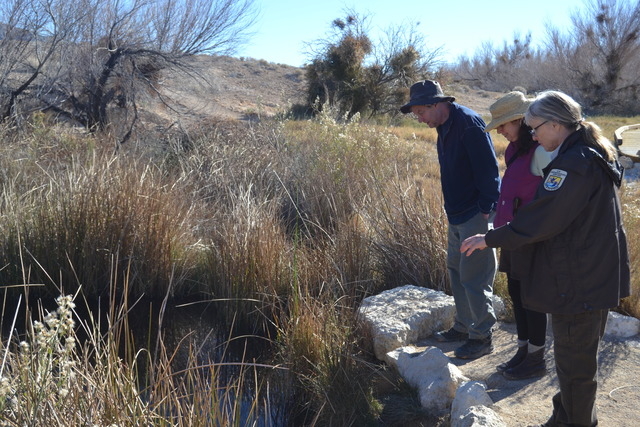 Visitors to the Ash Meadows National Wildlife Refuge in Death Valley will see more than endangered species and an oasis in the middle of the Mojave Desert, beginning today. The U.S. Fish and Wildlife Service has announced that the 23,000 acre refuge will be home to a $10 million, 11,000 square foot visitor center.

The newly constructed facility replaces the former visitor center which consisted of a double-wide mobile home trailer placed at the site in 1992 when the refuge was first opened, according to USFWS Project Leader Christy Smith.

The expanded facility, which includes several different interpretive centers and displays, exhibits, a book store, meeting rooms and restrooms, will better serve the thousands of visitors that pass through the refuge each year.

According to Smith, 72,500 people registered as visitors at the center between January and October of this year. The actual number of visitors is likely much higher, she said, because many visitors do not stop and sign in.

Smith said USFWS has embraced the local communities of Pahrump and Amargosa Valley as part of the new building project and refers visitors to points of interest in those communities.

Though the refuge’s main mission is about land and wildlife, they also interpret human history associated with the area. As an example, Smith referenced former gunslinger Jack Longstreet, who hid out from the authorities in his cabin in the refuge. USFWS restored the cabin to its original condition and it is available for public viewing.

The refuge is home to 22 endemic species of plants, insects and fish. Those species, including the Amargosa Pupfish, the Spring-loving Centaury and the Ash Meadows Naucorcid can not be found at any other place in the world. Five of the endemic species are endangered and seven of them are threatened with extinction. The endangered and threatened labels arose due to habitat destruction and competition with non-native species.

Smith explained that USFWS has taken steps to preserve and protect those species. Devil’s Hole Pupfish eggs have been gathered, harvested and raised to the adult stage; creating a second population, housed elsewhere, which ensures survival of the breed should anything happen to Devil’s Hole.

USFWS has also ensured the survival of the Pahrump Poolfish. Though the fish originated on privately owned land, Smith explained, the land owner did not want to maintain the spring and pool where the fish lived. Prior to the pool drying up, Smith said biologists gathered the fish and allowed the species to re-populate in Desert National Wildlife Refuge in a spring-fed aquarium, north of Las Vegas. Smith said the Pahrump Poolfish have survived and it is hoped that those fish can, some day, come back to Pahrump.

Nye County Commissioner Dan Schinhofen said that though opportunities exist for recreation at Ash Meadows National Wildlife Refuge, he feels restrictions on activities at the site are prohibitive. “You can’t walk here, you can’t drive there,” he said. Schinhofen said that locals used to be able to enjoy the area but the authority exerted by USFWS, in particular, has “gotten out of hand.”

Schinhofen offers a solution to what he deems agency over-reach, “They need to give the property back to the state and county. Let the local people manage it. We know what’s best.”

Smith said that that each federal agency has a mission. USFWS’ mission is to manage land, primarily, she said, for wildlife. The National Park Service and the Bureau of Land Management, manage land for people and multiple uses, respectively. Smith admitted that given USFWS’ mission, permitted activities are more restrictive. “Typically, we have a lot more rules,” she said. However, she said, if people want to do things that are not permitted within the refuge, they are referred to appropriate public lands where the sought after activities are permitted.

Ash Meadows National Wildlife Refuge is a mini-version of what Las Vegas used to look like, Smith said. The area was undisturbed until the 1940s when developers started to build resorts. The springs were outfitted with concrete pools so visitors could bathe in them. A direct result of the development was that the fish lost their homes and wildlife lost their watering areas, she said. Once the pools were restored to their original condition the fish and insects started to repopulate. The springs now flow unimpeded through the desert, she said, in an area that has begun to repopulate itself with native plants such as Arrow Weed.

Smith encourages visits to the refuge throughout the year. Visitors are likely to see bighorn sheep at the refuge’s Point of Rocks early in the morning and can visit the pools where the Amargosa Pupfish territorially chase other fish. Summer is the optimal time for nature lovers to visit, she said. “The hotter it gets, the more the native species of plants and fish thrive,” she said.

A unique feature of the new construction, typical of 1960s architecture, is its net-zero rating by use of the “greenest materials” available. The solar panels atop the parking lot and center provide the facility with its electricity. “Our goal is to have no power bill,” Smith said.

The new visitor center, located on Spring Meadows Road, opens to the public on Jan. 2, 2015. The center will be open every day from 9 a.m. to 4:30 p.m. A grand re-opening will be announced in late January.