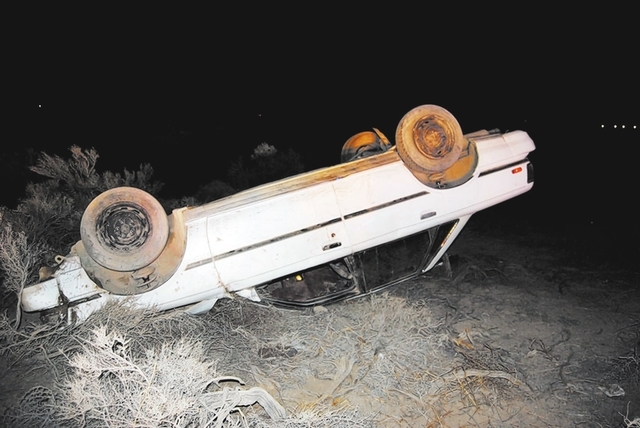 Two people were sent to the hospital this weekend after a vehicle rolled over in the area of Homestead Road and Elderberry Street Sunday evening.

One was transported locally, the other was flown to a Las Vegas hospital for treatment.

Pahrump Valley Fire Rescue Services and Nye County Sheriff’s deputies were dispatched around 5:30 p.m. to the area of Gamebird and Homestead roads for a report of single-vehicle rollover with a person trapped underneath the vehicle.

“Our initial report was for a one-vehicle rollover with a patient trapped under the car. While en route we were informed there was a second patient injured as well. There was no further information on the second patient,” the fire chief said. “That’s when we arrived and made the change on where the accident had actually occurred.”

As the fire chief was approaching the scene, he said he was flagged down by a bystander. They then informed him they had already pulled the person trapped by the vehicle out from underneath it before first responders had arrived.

“A bystander approached me before I got to the actual accident scene and informed me they had rocked the vehicle and pulled the one patient out from underneath it,” he said.

After medics arrived on scene and assessed the two patients, they deemed both individuals needed to be transported to a medical facility for further care.

Mercy Air was then called in to transport one patient to University Medical Center in Las Vegas. The other was transported locally by ambulance for treatment at Desert View Hospital.