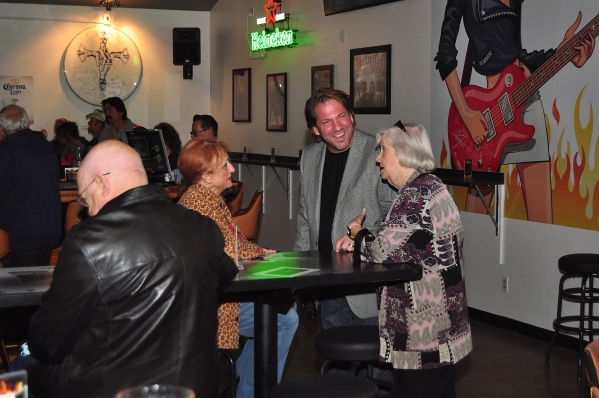 The past year has been an exciting one for business in Pahrump, with a slew of new establishments opening their doors in town and changes at the Chamber of Commerce.

From big name suitors, to local small businesses, a vast array of businesses started operations in the valley. The town of Pahrump showed that 258 businesses were granted business licenses in Pahrump through the end of November.

The largest addition to town was the opening of the long-planned Holiday Inn Express at 861 S. Highway 160.

The 104-room hotel opened in late September, adding a boost of rooms and amenities to the town. The 60,000-square-foot, three-story facility features an outdoor pool and spa and a fitness center. Each room includes a flat-screen television, a microwave, coffeemaker and a mini fridge.

WIth the new business came new jobs, as the Holiday Inn added 25 permanent jobs, in addition to the temporary construction jobs needed to build the hotel.

Mandy Gendreau, general manager of the Holiday Inn, who put in a lot of hours of hard labor prepping the hotel herself, was pleased to take in the first customers.

“It was very exciting,” Gendreau said. “Everyone was very, very excited and happy to finally be done with the construction and actually have an open hotel with guests.”

Another new business that had a tremendous amount of buzz surrounding it since rumors started floating around about the establishment, was Vince Neil’s Tatuado Wild Side Tavern.

The bar, named after the legendary Motley Crue frontman, opened up to thirsty residents early this month in the building that housed the Valley Bar, hopes to add a new element to the area’s nightlife.

Owner Michael Tsunis explained that they hoped to bring in a taste of what he has in his Tatuado-brand establishment inside the Circus-Circus Hotel and Casino over the hump.

“I’m trying to bring Vegas out to Pahrump,” he said. “There is nothing out here like this.”

The bar plans to add a festival-style concert area in 2016 in the back of the property, which Neil hopes help the bar become a staple on many bands’ touring list, including his own solo group.

“We’ll put a stage back there and do a summer concert festival and of course I’ll play,” he said. “Make it like a regular stop on the rock n’ roll touring schedule.”

Besides the big name additions, there have been quite a few local additions that have popped up around town as well.

After losing his job, Willis wanted to open a store that catered to trading card playing fans as he saw the need for it in town.

“I wanted to bring something to town that I know a lot of people are looking for,” he said.

Willis holds weekly tournaments to offer area youth something to do to help keep them out of trouble after school. He is in the process of being sanctioned by one of the more popular trading card games, Magic the Gathering, to have the chance to send the top local players to national competitions.

The Town of Pahrump reported that 258 businesses were granted business licenses through the end of November.

The 5,200 square-foot shop features top of the line equipment ready to get your car or truck back to its original glory.

Owner, Tom Saitta said that the body shop compares to anything one could find over the hump, as they have the ability to conduct repairs as well as any shop nearby.

“Even if you were in Las Vegas you’d be hard pressed to find a shop that has all the equipment that we have,” he said. “A lot of that is because we just built it so we went out and the latest of what’s available at this time.”

In addition to adding new businesses to town, the Pahrump Valley Chamber of Commerce went through a few changes themselves.

The organization saw a change in its chief executive officer position, as former CEO Salli Kerr stepped down to take a position as executive director of Nevada Outreach Training Organization.

The chamber director of marketing for MasterTech Media, Chris Erwin, took over as CEO earlier this month.

Erwin already hosted his first ribbon cutting, one for Andrea’s Diner, and has a plan of action ready to go for the chamber.

“The big thing is that we really want to contact all members, current, former and prospective and let them know about our goals,” he said. “I’m willing to have those conversations with all members and non-members about what we’re going to be doing differently.

“Our focus is back on the value of business in the chamber. I think the more the chamber can do to create value, we can show them you paid X amount for your chamber membership, and here is what we’re doing to show you that we appreciate the money, and it goes toward the community. We also want them to feel good about making that payment.”

Kerr remains active with the Chamber of Commerce, as she was elected to the board of directors in November. Incumbent Sue Bai was also re-appointed to her spot on the nine-person board.