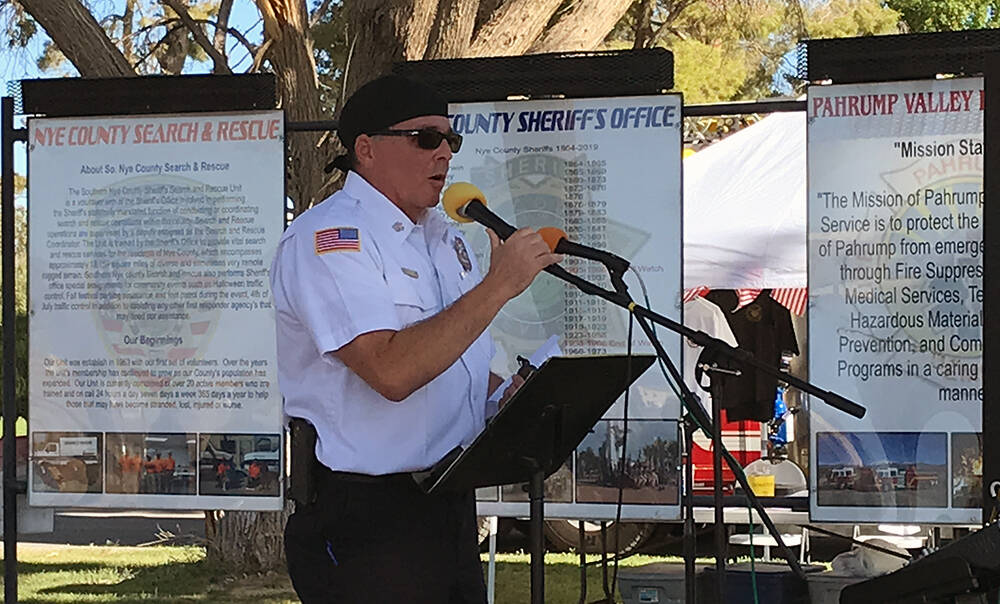 Robin Hebrock/Pahrump Valley Times Pahrump Valley Fire and Rescue Chief and Nye County Emergency Management Director Scott Lewis was one of many first responders at the 9/11 Memorial Ceremony and he shared a few words with those attending that morning. 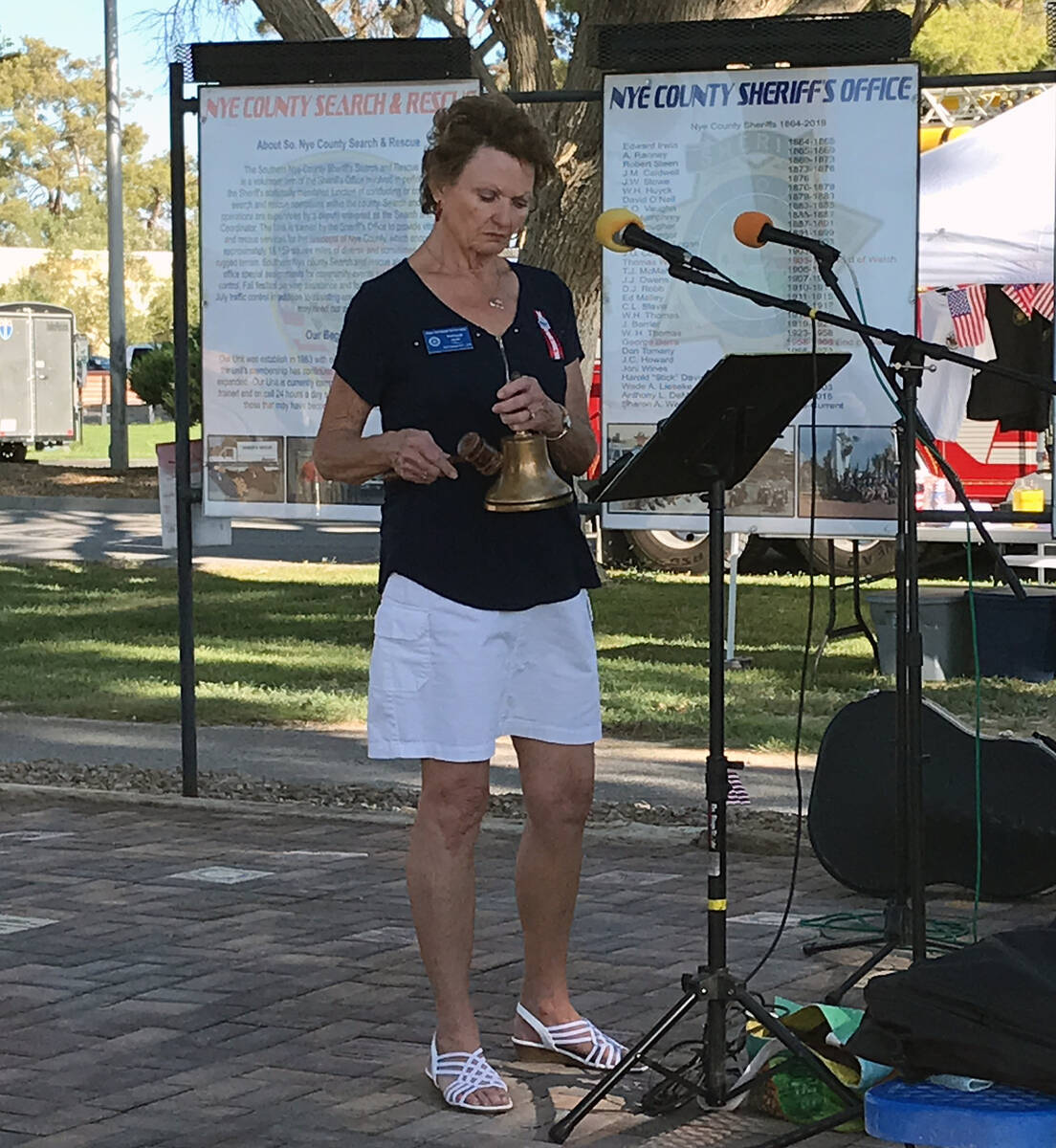 Robin Hebrock/Pahrump Valley Times Rotarian and 9/11 Memorial Ceremony event co-chair Phyllis Howell can be seen ringing a bell in honor of those who perished in the Sept. 11, 2001 terrorist attacks. 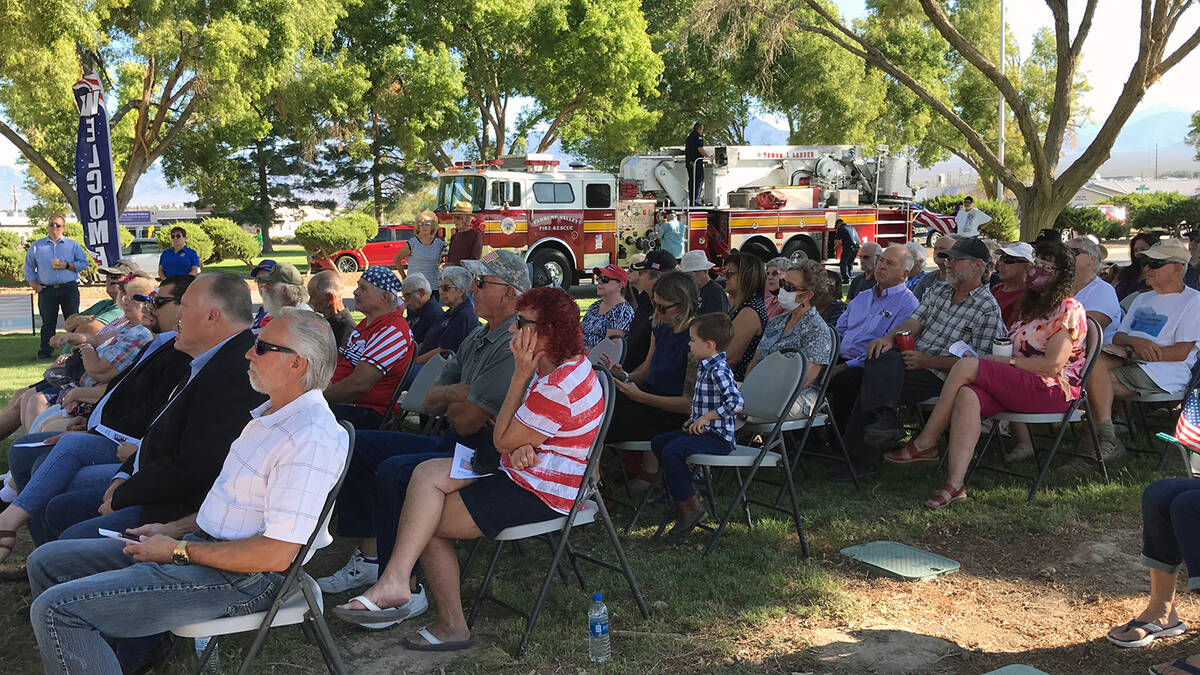 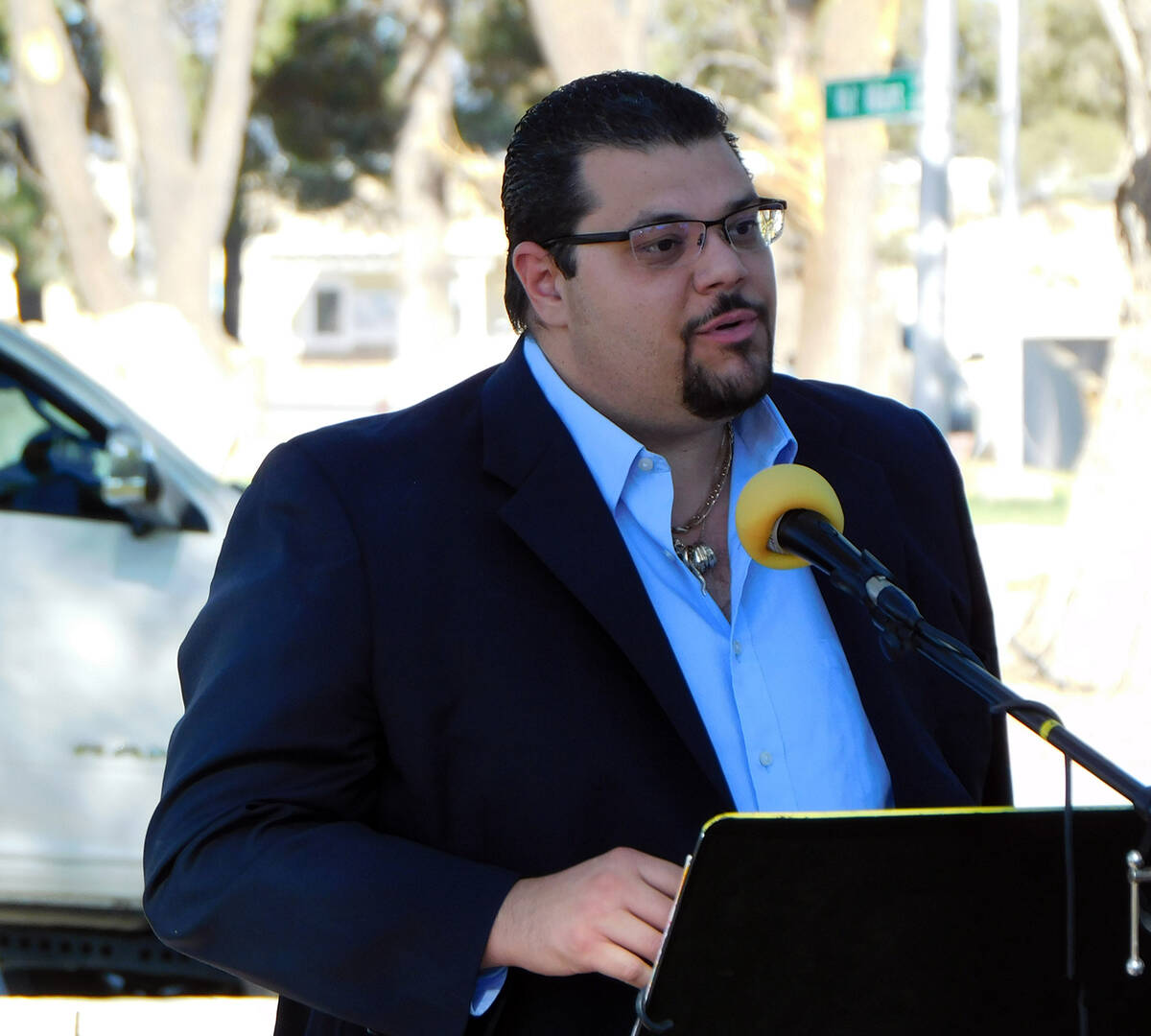 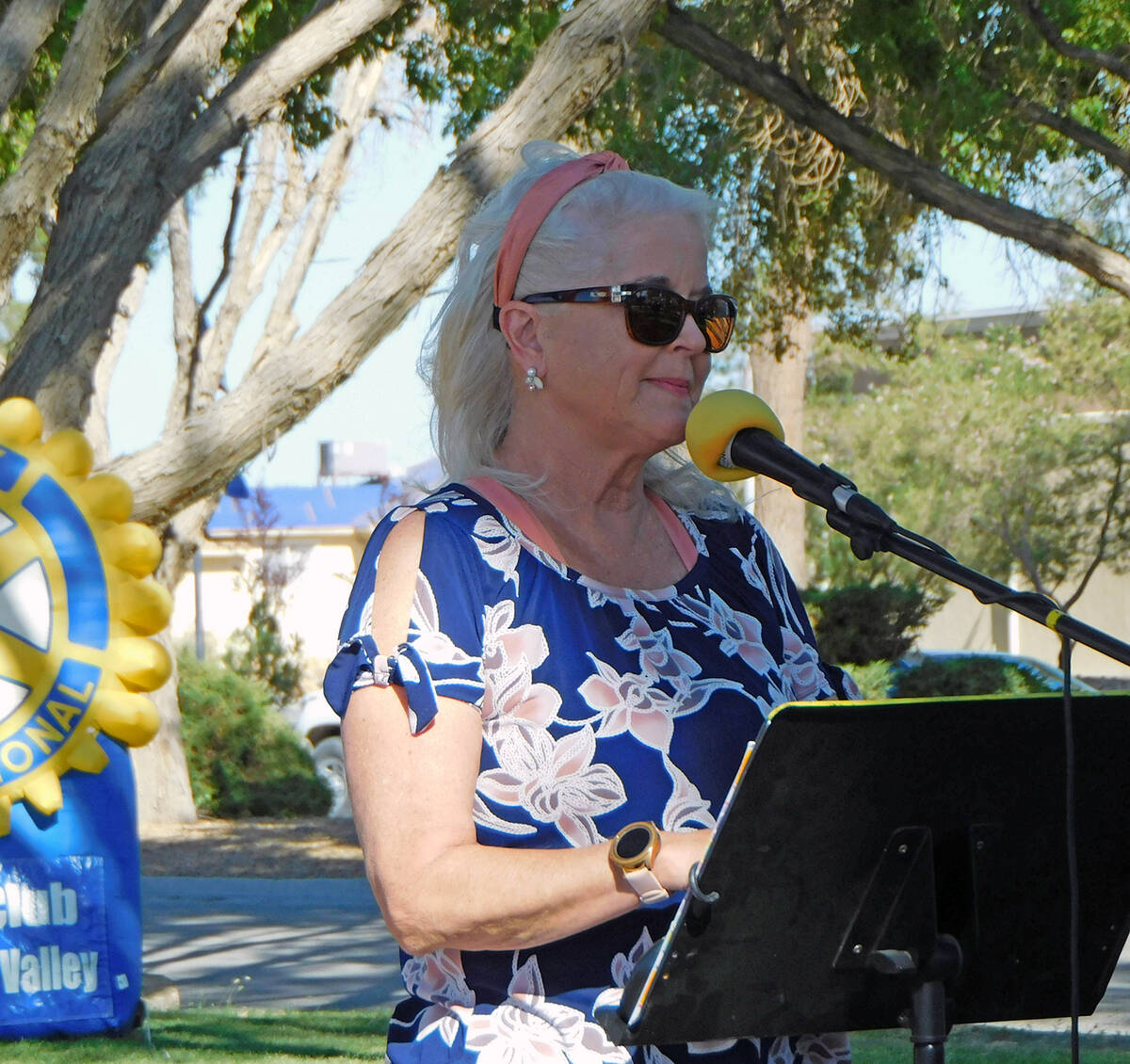 Robin Hebrock/Pahrump Valley Times Nye County Commission Chair Debra Strickland was another guest speaker for the ceremony to mark the 20th anniversary of the Sept. 11, 2001 attacks. 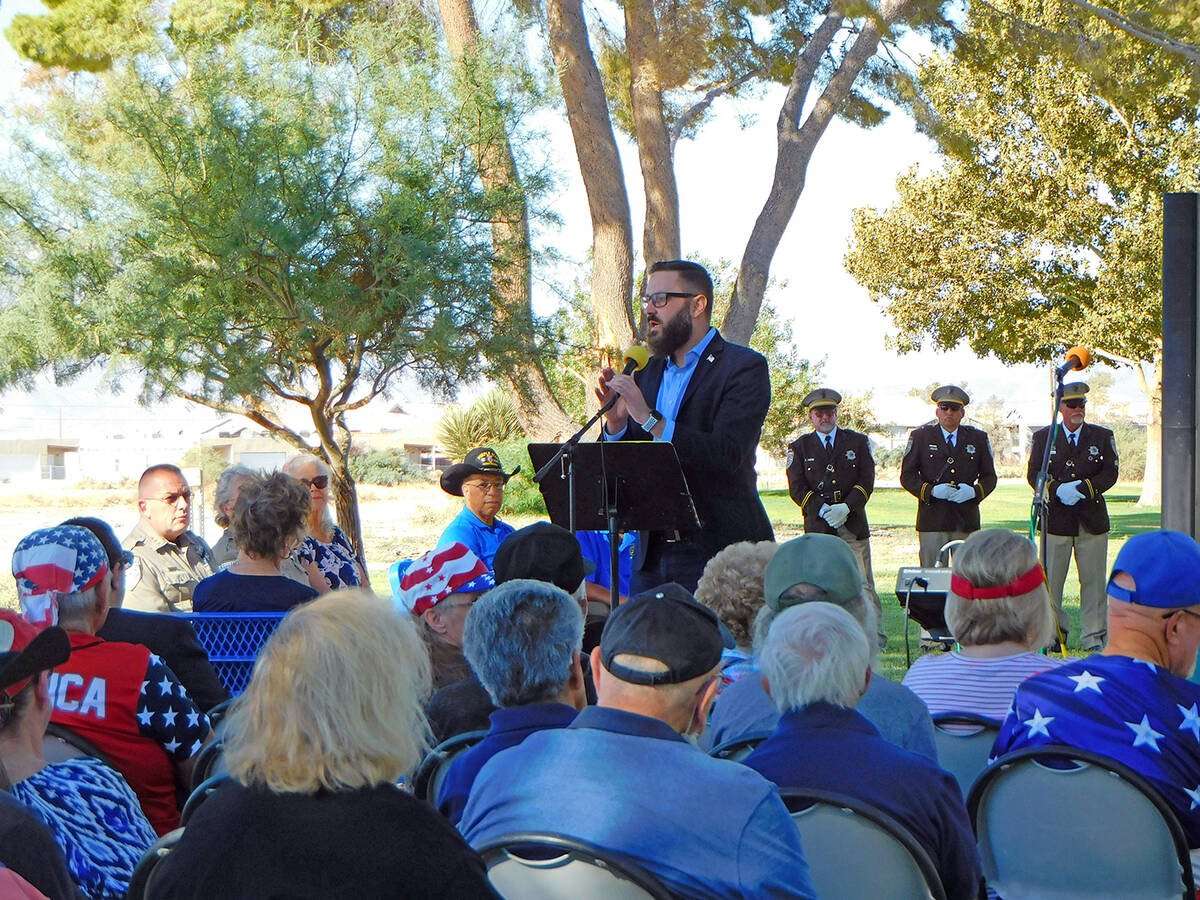 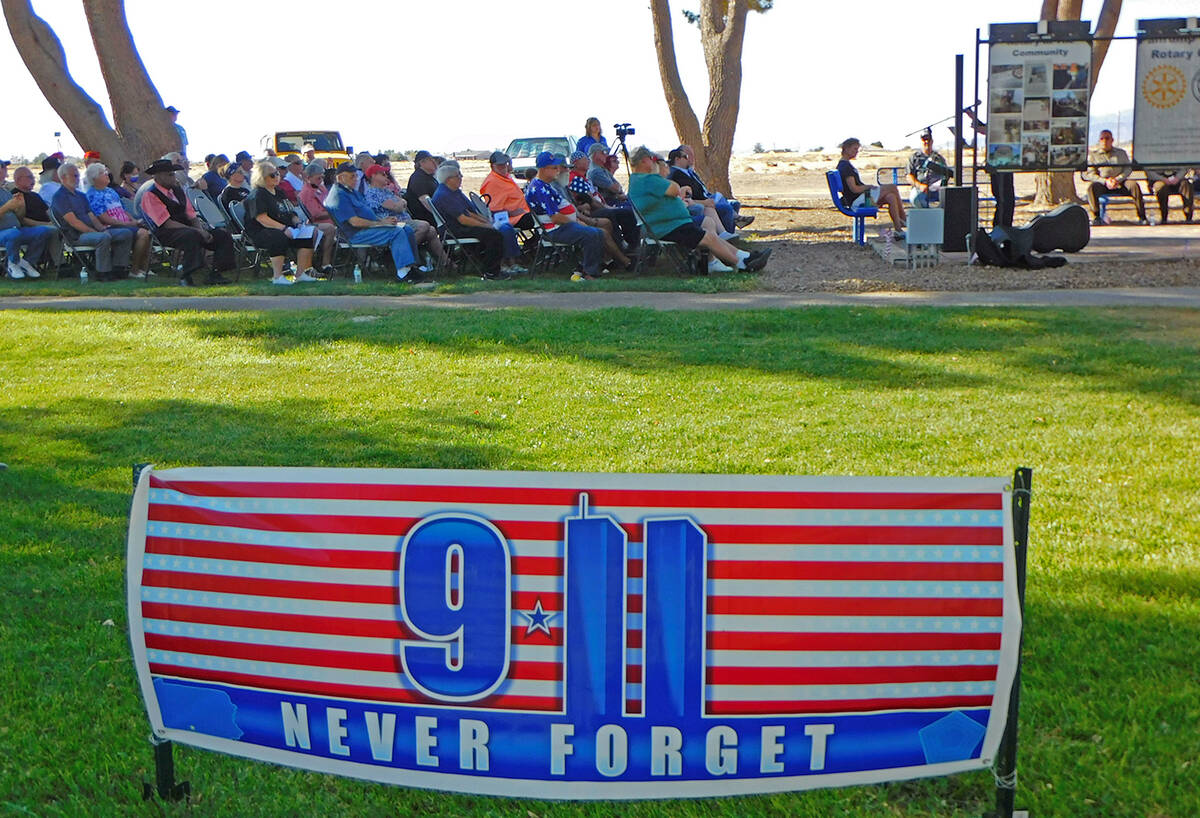 Robin Hebrock/Pahrump Valley Times A special banner was strung across the grass at the First Responders Reflection Area in the Calvada Eye, with 9/11 Memorial Ceremony attendees pictured seated in the background. 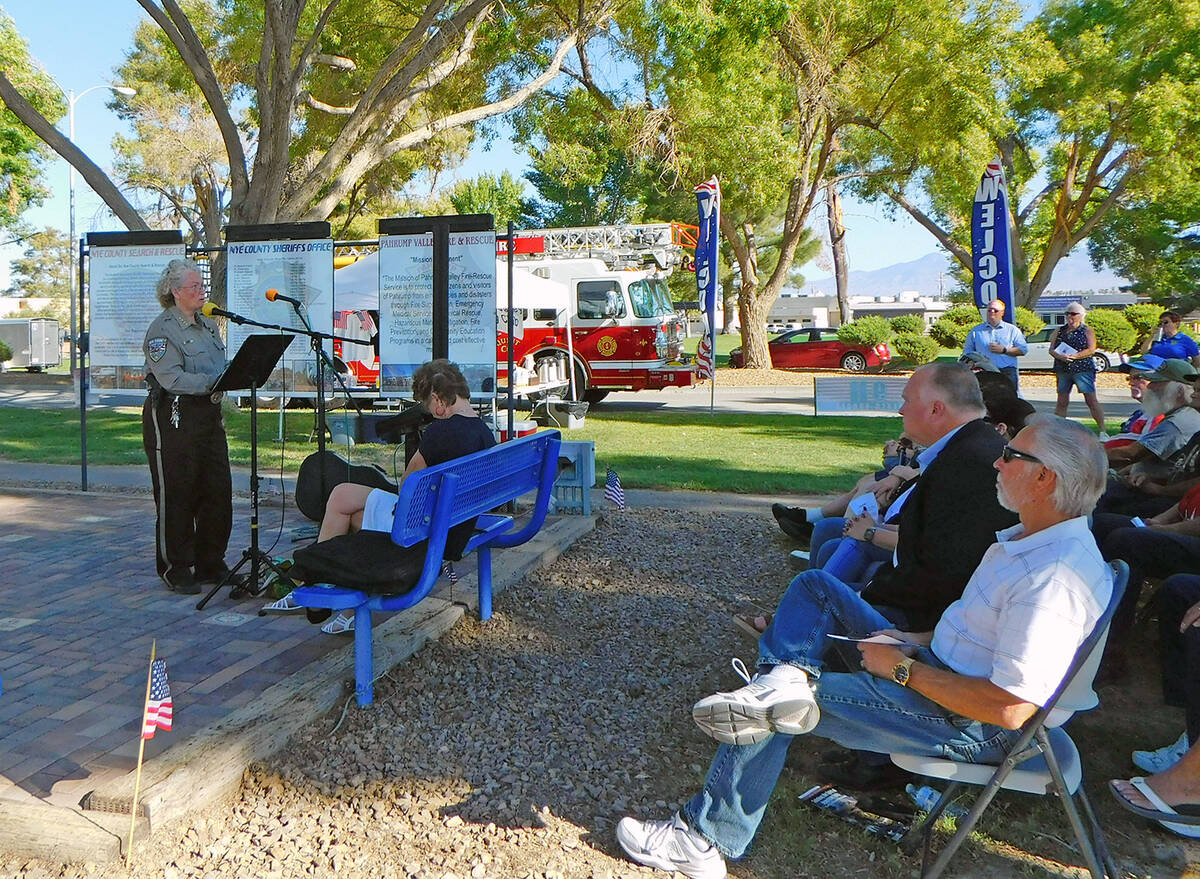 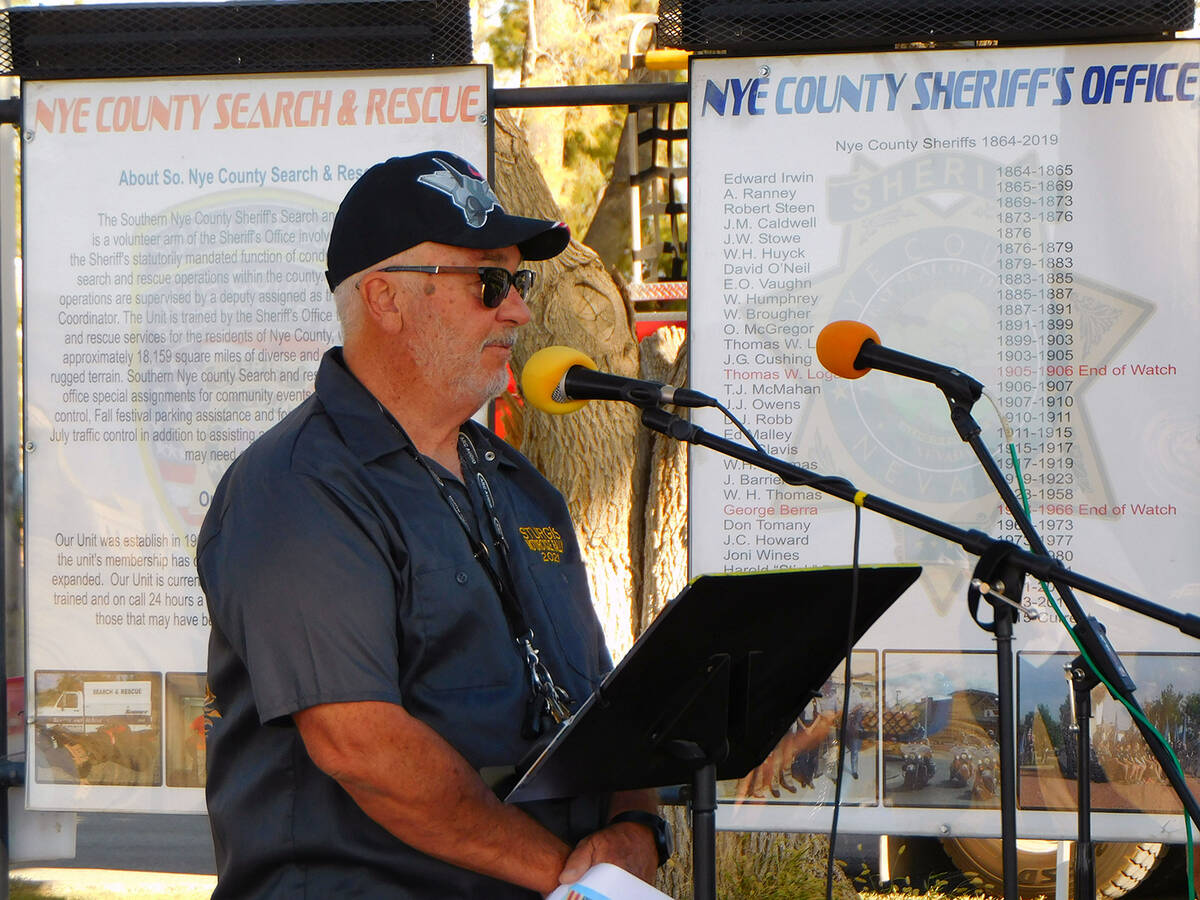 Robin Hebrock/Pahrump Valley Times Rotarian Roy Mankins speaks about the establishment of the First Responders Reflection Area, a special project he spearheaded in 2016 when he was president of the club. 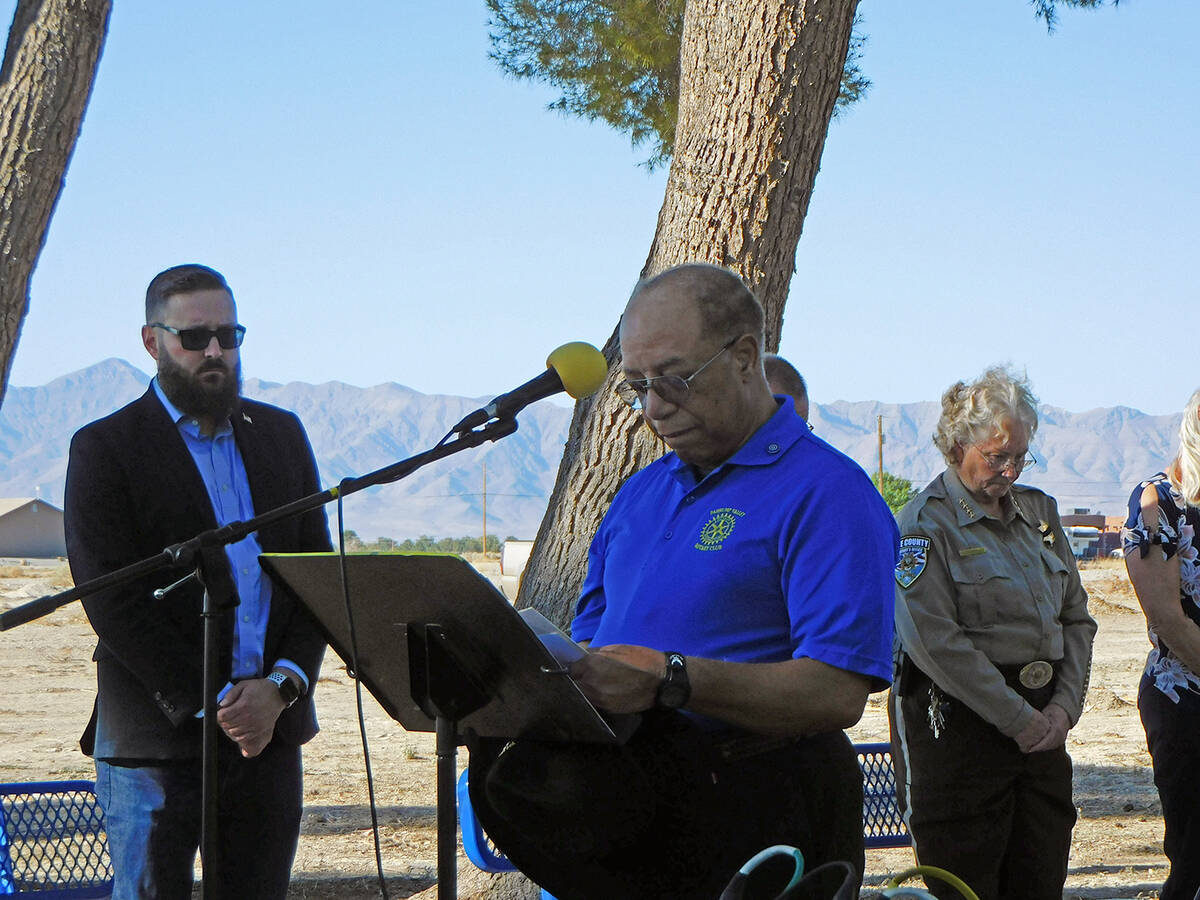 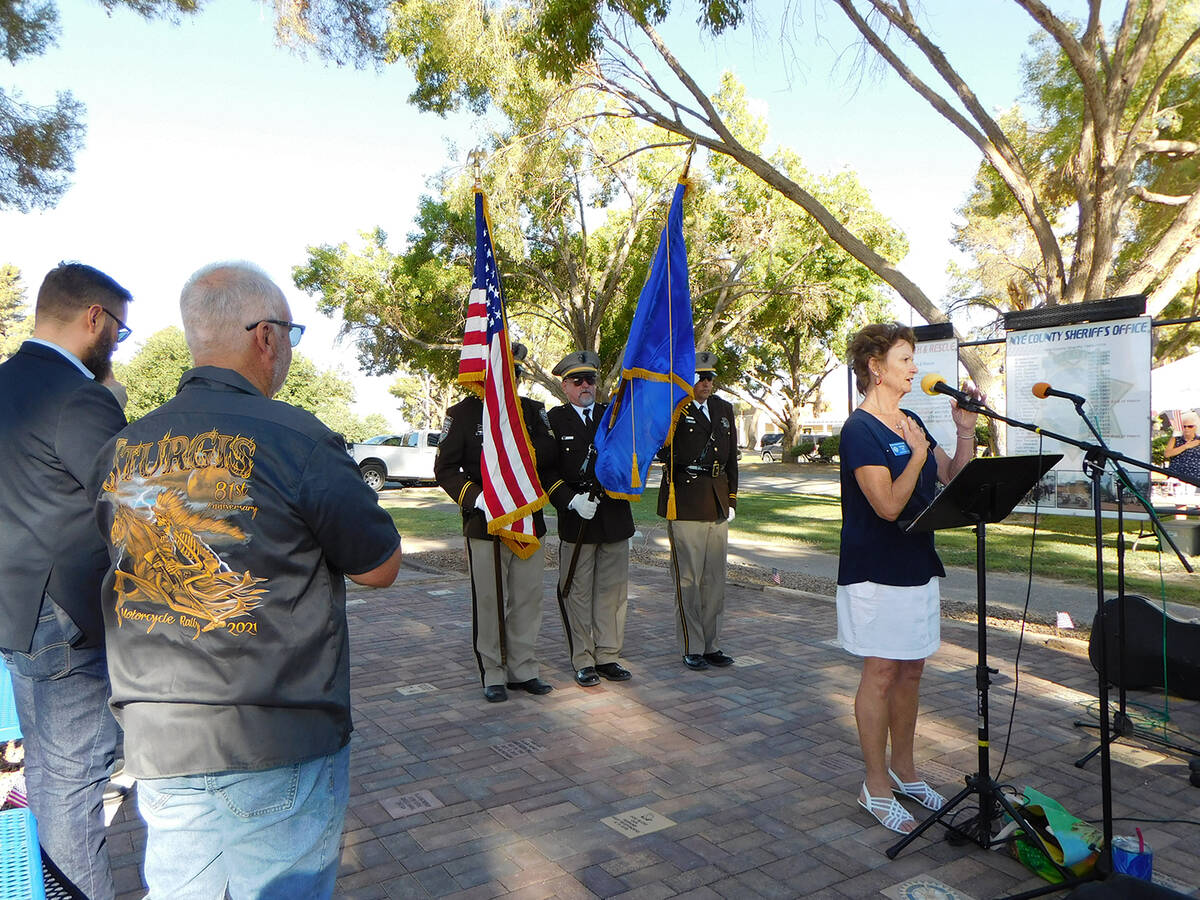 Early that morning, hijackers took control of four different American aircraft with the aim of turning the planes into weapons of terror and at 8:46 a.m. Eastern Time, the first of those four planes slammed into the North Tower of the World Trade Center.

Televisions all across the nation were suddenly broadcasting images that many could not believe they were seeing, but there were more egregious atrocities to come.

At 9:03 a.m. Eastern Time a second plane was deliberately crashed into the South Tower of the World Trade Center and at 9:37 a.m. Eastern Time, a third hit the Pentagon. The fourth and final plane, however, never reached its ultimate destination, which is said to have been either the U.S. Capitol or the White House, as the passengers of that flight bravely confronted the horrendous reality of what was happening and took action to attempt to regain control of the plane. Sadly, those attempts were unsuccessful and by 10:03 a.m. Eastern Time, their plane had crashed into a field in Somerset County, Pennsylvania.

Thousands of people lost their lives that day, including hundreds of first responders, and for many, the memory of the events of that fateful morning are still as sharp as ever. The phrase “We Will Never Forget” was emblazoned on the hearts of those who witnessed the devastation, both firsthand and through news broadcasts, and there is an underlying determination among much of the American public to ensure that the current generation never lets the sorrowful memory fade and that future generations are educated about what took place on Sept. 11, 2001.

In the valley, the local Rotary Club is one of the area organizations that makes it a goal each year to hold a 9/11 Memorial Ceremony and this year’s event was well attended, with dozens of residents and a bevy of first responders and local dignitaries all heading out to the First Responders Reflection Area for the solemn observance.

The event kicked off with the presentation of the colors, performed by the Nye County Sheriff’s Office Honor Guard, which displayed the flags in all their glory as the crowd recited the Pledge of Allegiance. 9/11 Memorial Ceremony event co-chair Phyllis Howell then began the national anthem and members of the audience immediately joined in, their own tones mingling with Howell’s as the familiar words of the “Star-Spangled Banner” rose into the breezy morning air. Fellow event co-chair Dr. Tom Waters followed with an opening prayer.

“Let that day which exhibited the worst of mankind be the catalyst of also revealing the best in our human hearts, to love each other,” Waters said in part.

Rotary Club President Eddie Williams stepped forward to offer a greeting to all in attendance and thanking them for taking the time that morning to be there before turning the microphone over to Pahrump Rotary Club Past President Roy Mankins, who spearheaded the project that resulted in the establishment of the First Responders Reflection Area. He spoke about the impetus behind that project, noting that is was intended to provide a place for people to gather in remembrance of Sept. 11 to share their stories and emotions, and as a place to heal the wounds inflicted in the psyche of the public. With assistance from Nye County, Valley Electric Association and local churches, the First Responders Reflection Area was built and officially dedicated on Sept. 11, 2016, the 15th anniversary of the horrific terrorist attacks.

Next to speak was Pahrump Valley Fire and Rescue Chief and Nye County Emergency Management Director Scott Lewis, who spoke about one of the fire engines parked on site that morning, which had played a part in the response to the Sept. 11 attacks.

“We have setting up behind us our Tower Ladder 1. Tower Ladder 1 was actually built in 1992 and it served New York City out of Queens, out of Ladder 116 on Astoria Boulevard. That tower ladder served at both World Trade Center events, which is commemorated on the side doors so I encourage you to go up, take a look, take some photos with it. It has some real bones to it and now currently serves Pahrump and has done so for almost 20 years. We are very proud of that piece of equipment,” Lewis said.

Turning to the significance of the bell in terms of the fire service, Lewis explained that the use of bells to notify of emergencies goes back centuries and the fire service began adopting the use of bells for notification purposes as well, an alerting device that is still used to this day. In addition to ringing bells for emergencies, the bell has also become a sound that commemorates the loss of a fire service member’s life. That tolling of the bells is called the five-fives and involves chiming the bell five times, five times in a row. This tolling was incorporated into the 9/11 Memorial Ceremony with firefighter Javier Soto performing that somber duty.

Lewis then asked all of the first responders in attendance to come forward and introduce themselves, giving them the recognition they deserve for their tireless dedication to keeping their communities safe.

Nye County Sheriff Sharon Wehrly spoke that morning as well, telling the audience, “Most everyone remembers the shock of it, the anguish, the anger, the resolve and then finally, the coming together as a nation and as one people. You know, that’s something that wasn’t intended. That attack was supposed to shake us to our very boots and it was supposed to tear our country apart. That didn’t happen. It brought our country together.”

An up-welling of patriotism followed the attacks, with Americans all around the nation volunteering, donating, flying flags on their homes and businesses, and even Congress experienced unity as they sang patriotic songs and prayed on the steps of the U.S. Capitol building. “At that point they weren’t afraid that we would offend someone by our prayer, our flag, our Americanism. That all vanished. Again, during this 20 years, many have become apathetic. But to remain a free people, we dare not,” Wehrly continued, concluding, “My advice to you before we leave today, think about this. You must be forever vigilant. Our enemies are always, always at our gates. God bless America.”

Nevada Assemblyman Greg Hafen II and Nye County Commission Chair Debra Strickland were guest speakers as well, both invited to share their thoughts with the crowd. Commissioner Bruce Jabbour was also scheduled to speak but due to a death in his family, he was unable to attend. Stepping in as the final speaker for the event was commissioner Leo Blundo and each of the elected officials who spoke shared a few emotional minutes detailing the tragedy and its results in their own way.

Throughout the 9/11 Memorial Ceremony, Howell conducted a bell ringing at the precise times at which the World Trade Center buildings and the Pentagon were struck by American Flight 11, United Flight 175 and American Flight 77, 8:46 a.m., 9:03 a.m. and 9:37 a.m. respectively. Before wrapping up the event, she also touched upon United Flight 93, which was the fourth and final plane to crash as part of the Sept. 11 attacks, speaking about the immense courage shown by those who did what they could and ended up giving their lives in a mission to ensure that flight would not reach yet another American icon. A closing prayer by Waters concluded the 9/11 Memorial Ceremony and the crowd was invited to partake of coffee and have a look around the Rotary Club’s memorabilia tent before departing for the day.